The constant corrections they had to make left them ‘war wounds’

The photographers present at Istanbul Park captured a detail that perhaps went unnoticed by the fans after the race: the hands of the drivers. Through those images you can see how tough the Turkish Grand Prix race was.

Sebastian Vettel came over to congratulate Lewis Hamilton on his seventh championship right after the race. The German took off his gloves to shake his hand with the British and at that moment the wounds on his thumb were visible.

Later, at the FIA ​​press conference, the cameras were also fixed on the injuries to Hamilton’s right hand. Both drivers had them in the same area and probably the rest of the drivers on the grid, too. This detail has been echoed by Reddit user Aichaf, which has generated a great discussion on this topic.

These tell us how hard the driving was during the race in Turkey, one with changing conditions, which was played at the beginning with rain tires and then with intermediates on a track where spins, accidents and on the that corrections were mandatory in each round. 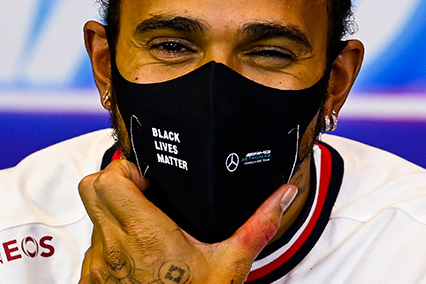 The result of these constant corrections are these ‘war wounds’ of the pilots. The part that suffers the most from the hands is precisely the one that is in constant contact with the steering wheel, the inside of the thumb, as can be seen in the images by Vettel and Hamilton.

It is something that many simracers know well, as they use tools that perfectly simulate what pilots feel on the track, no matter how much they use the best gloves. The longer hours, the more blisters right in this area.

And the fact is that the thumbs are one of the key parts of a pilot. Hence, Alonso insured his own in 2010 as part of a campaign with his sponsor Banco Santander. « Besides being essential in driving, they are a sign that everything is under control and well protected, » Alonso said at the time.