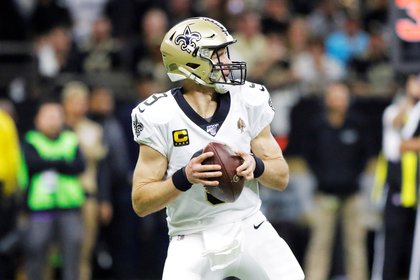 New Orleans (USA), Nov 21 . .- New Orleans Saints quarterback Drew Brees said this Saturday night that doctors have been encouraged by the progress in his rehabilitation.
According to Brees, doctors are optimistic about his progress, specifically the improvement in lung function and the continued dissipation of the pneumothorax suffered during the first half of last weekend’s victory over the San Francisco 49ers.
Speaking to sports news network ESPN, Brees also noted that doctors discovered additional rib fractures.
Brees went on injured reserve Friday afternoon, meaning he must miss at least three games as he recovers from fractured ribs on both sides of his body and a punctured right lung.
With lung injuries as the main concern, Brees explained that he underwent X-rays and CT scans and that doctors examined him every other day this week.
The medical team that treats him confirmed a total of eight rib fractures on his left side and three on the right, the star quarterback specified.
That number is more than double the total number of fractures they detected on Monday, when they revealed that the quarterback had five broken ribs.
In the same statements, Brees stressed that he believes that all the fractures on his left side occurred against the Tampa Bay Buccaneers two weeks ago and that those on the right side occurred against the 49ers, last Sunday.
Brees noted that the additional fractures became visible on the scans as the swelling in the chest decreased, allowing the damage to be seen more easily.
He also admitted that his body is like paralyzed due to the injuries he sustained during the game against the 49ers.
Brees said it was a lack of functionality at halftime that led him to inform the Saints head coach Sean Payton that he could no longer play and indicated that he was unable to throw the ball even 10 yards at the time.
But he indicated that he hopes to be ready to play as soon as he is eligible in Week 14 of the regular season and can do so without increased risk of re-injury.
It’s the 41-year-old Brees’ first time on the disabled list, and it will be the seventh game he has missed due to injury in his 20-year career.
Taysom Hill is expected to make his first career start in the National Football League (NFL) when the Saints face the division rival Atlanta Falcons on Sunday.
The 7-2 winning Saints are the leaders in the National Conference (NFC) Southern Division, while the Falcons (3-6) are in third place, but come into the game with a two-game winning streak .