The Italian Prime Minister, Mario Draghi, regretted this Thursday “the humiliation” suffered by the president of the European Commission, Ursula von der Leyen, by the Turkish president, Recep Tayyip Erdogan, but assured that it is necessary to cooperate with “dictators” like him.

“I do not share in any way Erdogan’s behavior with President Von der Leyen. I have been very sorry for the humiliation that she has had to suffer“Drgahi said at a news conference in Rome.

Draghi explained that the underlying debate is the collaboration of democratic countries with dictators to defend their interests, and among these he includes Erdogan.

“As I have already said in other press conferences, we have to consider that we must collaborate with these dictators, let’s call them what they are“said Draghi, insisting that” you have to be frank when expressing views “, but you also need to be prepared to cooperate,” you have to find the right balance.

This is how Draghi reacted to incident that occurred in Ankara when Von der Leyen was relegated to a side sofa during the meeting he held on the 6th with the Turkish president, while he and the president of the European Council, Charles Michel, sat on two chairs in the center of the meeting room .

Von der Leyen expected to receive the same treatment as Michel at the meeting. The chief spokesman for the European Commission, Eric Mamer, stressed on Wednesday that “he should have received exactly the same seat” in terms of protocol.

For its part, the Turkish Ministry of Foreign Affairs convened the Italian ambassador in Ankara, Massimo Gaiani, on Thursday night to protest the comments of the Italian Prime Minister on Erdogan. 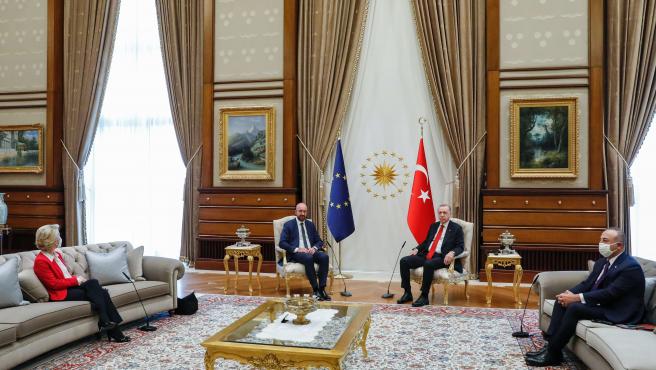 The Turkish daily Hurriyet reported the call as “breaking news” on its website, and Turkish Foreign Minister Mevlüt Çavusoglu, “strongly condemned” the words of the head of the Italian Government, in a brief statement posted on Twitter.

“We strongly condemn the unacceptable populist rhetoric of Italian Prime Minister Draghi and his ugly and irrational statements about our elected president, “wrote Çavusoglu in his tweet.

A few hours earlier, the head of Turkish diplomacy had assured that the decision on where Von der Leyen was to sit was made according to suggestions from Brussels officials people in charge of the protocol.