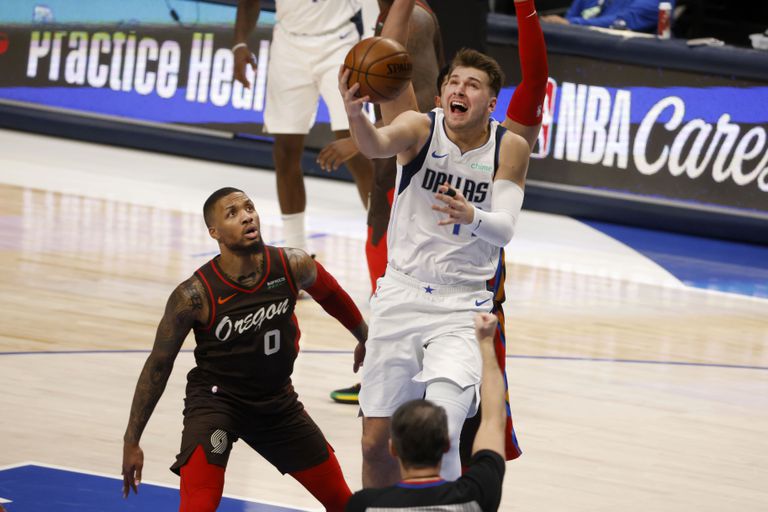 Doncic pitches in the presence of Lillard.Michael Ainsworth / AP

The choice of Luka Doncic to the detriment of Damian Lillard to form in the starting quintets of the All Star game to be held on March 7 in Atlanta has ignited controversy in the NBA. “I still think Damian Lillard should be the starter. Nobody is as feared in a game as him, ”said the legendary Shaquille O’Neal, now a commentator on TNT’s Inside the NBA program. Also commentator and former player Kenny Smith corroborated Shaq’s criteria: “In a popularity contest Luka would win. But the most feared player in basketball right now is Damian. For me he was the MVP of the preseason and I think he should start at the All Star. The debate is served in an appointment that is of enormous importance for what affects the cache of the players.

The starting quintets reserved three spots for the forwards and centers and two for the guards and guards. The first point guard chosen in the Western Conference was Stephen Curry. In second place there was a draw between Doncic and Lillard. The election was decided, 50% based on the votes of the fans, 25% those of the press and another 25% those of the players themselves. The press and players chose Curry first, Lillard second and Doncic third. But the Slovenian guard from Dallas garnered 3.3 million fan votes, almost half a million more than the Portland guard. And in the event of a tie, the rules give preeminence to who receives the most votes from the fans.

Doncic, who turns 22 on February 28 and in his third season in the NBA, will play his second All Star. On the other hand, Lillard, 30 years old and in his ninth season in the league, loses the chance to be for the first time holder in which it will be his sixth presence in the appointment of the stars. Cleveland players Kevin Love and Larry Nance sent messages via Twitter defending that Lillard deserved to start in Atlanta.

Doncic averages 29.1 points, 8.6 rebounds and 9.4 assists, with 47% accuracy in field goals and 33.5% in triples; Lillard, 29.8 points, 4.4 rebounds and 7.7 assists, with 45.1% in field goals and 38.4% in triples. Those who defend Lillard argue that he has the best statistics in the final minutes of the games and has been the leader that has placed Portland in the fourth place in the West, with a balance of 18 wins and 10 losses, despite having played more half the season without starters McCollum and Nurkic. Dallas ranks 10th with 13 wins and 15 losses and has also suffered loss of starters in many games, especially from Porzingis and Hardaway.

They choose Durant and LeBron

The five starters chosen to represent the Western Conference are Curry, Doncic, LeBron James, Kawhi Leonard and Nikola Jokic; those from the East, Durant, Antetokounmpo, Embiid, Beal, top scorer this season with an average of 32.8 points, and Kyrie Irving. LeBron and Durant, the most voted by fans, with almost six million votes for the Lakers figure, and 5.5 million for the Nets, will be the captains of the teams and will elect their components.

In addition to the 10 starters, 14 more players will be designated by the 30 NBA coaches. The most voted after those who formed the starting quintets were Harden, LaVine, Tatum, Butler and Adebayo in the East, and Lillard, Mitchell, Anthony Davis, Paul George and Zion Williamson in the West.