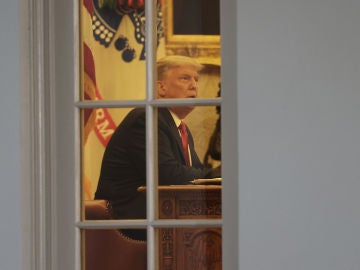 The outgoing president of the United States, Donald trump, wanted to attack Iran last week for its uranium enrichment program, but was dissuaded by his advisers, as reported The New York Times.

The New York newspaper revealed that Trump addressed the matter in a meeting last Thursday, a day after the UN, through the International Atomic Energy Agency (IAEA), reported an increase in enriched uranium reserves that Iran.

At the meeting in the Oval Office the vice president participated, Mike pence; the secretary of state; Mike pompeo, the new acting secretary of defense, Christopher miller; and the Chief of the General Staff, General Mark milley.

All of them dissuaded the still president from launching a military attack on Iranian facilities, considering that such aggression “could easily escalate to a broader conflict” at a time of political uncertainty United States.

At the end of the meeting the attack against nuclear facilities it was ruled out, according to officials cited by the New York Times on condition of anonymity.

A military attack that, according to the newspaper, could be with missiles but also cybernetic, would have targeted the Iranian nuclear facilities in the city of Natanz, where IAEA inspectors reported enriched uranium reserves of 2,449 kilos, well above the maximum limit of 300 kilos established in the nuclear pact with the great powers.

Iran began producing higher purity uranium last year, in violation of the nuclear deal, in response to the United States’ exit from the pact in 2018 and to pressure the European members of the agreement with the intention of guaranteeing the economic benefits provided in it.

The pact, signed in 2015, envisaged certain limitations of Iran’s nuclear program so that the Islamic Republic could not get hold of a nuclear bomb in the short term.

In return, international sanctions against Tehran were lifted, although the United States reinstated its punitive measures in 2018, including an oil embargo.