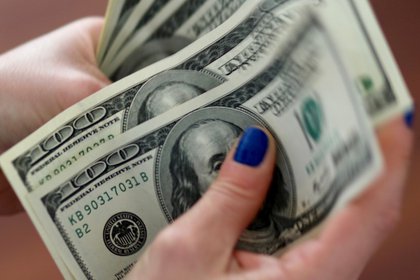 The free dollar remains stable but the upward pressure on financial prices does not stop. REUTERS / Marcos Brindicci

The dollar counted with liquidation rises again to reach $ 151 per unit, while the free price remains stable at $ 163 per dollar. The exchange rate tension thus remains limited in a day of the majority of losses both for Wall Street and for the Buenos Aires Stock Exchange. Argentine sovereign bonds also show slight losses and push the country risk to 1,368 points.

The financial prices of the dollar remain in demand in the Buenos Aires City. The dollar counted with liquidation opened with a rise of 1.3% to stay at $ 151.01, its highest level so far in November. The other implicit exchange rate that is operated in the Stock Market, the MEP dollar, did so with a similar increase to reach $ 146.

It is the cost per dollar that investors pay when buying bonds with pesos and then reselling them for dollars. In the case of cash with settlement, the operation allows obtaining dollars outside the country, while in the case of the MEP dollar the operation is entirely local.

These financial prices are kept in check through an aggressive policy of intervention by state entities, which daily sell dollars in exchange for pesos in reverse operations with the aim of avoiding jumps in the exchange gap.

Meanwhile, in the free market, the dollar remains stable at $ 163 in a market that, according to operators, has abundant supply every time it tries to rise.

However, the exchange rate tension remains if one looks at the official market. Today the wholesale dollar climbed 12 cents at the opening of the wheel, to be offered at $ 80.27 with the guarantee of the Central Bank. On a daily basis, the entity led by Miguel Pesce it sells and buys reserves to drive the movement of the currency, providing foreign exchange when supply wears off and buying when it has a chance. The balance of this intervention is almost neutral in the month, but the days in which it ends up having to sell worry investors and affect the rest of Argentine assets.

“Yesterday, USD 164 million were operated, where the BCRA once again registered a negative balance through sales according to private sources, close to USD 30 million,” estimated a report from Portfolio Personal Inversiones.

The inability of the Central Bank to buy currencies with which to prop up reserves that threaten to pierce USD 39,000 million is one of the main concerns of investors.

“How is Argentina going to accumulate foreign exchange reserves? This is the bottom line of what matters to bondholders, ”he asked. Siobhan Morden of Amherst Pierpoint Securities in a report for its clients. “Argentina is now at a worse starting point and on a more difficult path to accumulate enough liquidity to pay future debt liabilities,” he added.

Behind these doubts regarding how future debt payments will be sustained, despite the relief generated by the private debt swap, is the poor performance of Argentine sovereign bonds. With falls of around 0.2%, securities in dollars today push country risk to 1,368 points.

For its part, the Buenos Aires Stock Exchange also opened lower on Thursday, in line with the trend of foreign markets, awaiting signals regarding the Government’s negotiations with the International Monetary Fund (IMF) in search of a program of extended facilities.

The leading indicator S&P Merval of Buenos Aires lost 0.24% in the first deals of the day. The indicator then increased by just 0.6%, which, according to operators, is explained by the advance in implicit exchange rates. On Wall Street, the shares of Argentine companies showed the majority of advances, with IRSA and its 4.8% at the top, followed by 2.95% from Mercado Libre and 2.21% from YPF.

“Some traders may be more inclined to close their tactical bets after the recent strong rally,” he said. Gustavo Ber, economist at Estudio Ber.

Global equity markets show, for their part, the majority of negative movements pending new measures in the face of an increase in cases of covid-19 outbreak.

Marcos Bulgheroni, from Pan American Energy: “To invest you need access to currencies and know that the rules are not going to change”