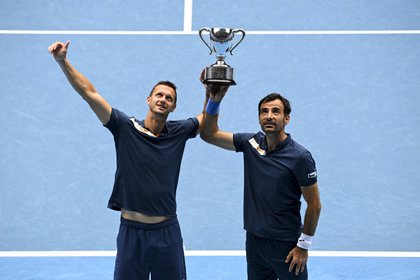 Melbourne (Australia), Feb 21 . .- Croatian Ivan Dodig and Slovak Filip Polasek (9) lifted their first Grand Slam title as a team by defeating 6-3, 6-4 in the Australian Open final to the defending title duo of American Rajeev Ram and Britain’s Joe Salisbury (5).
The veterans Dodig and Polasek, aged 36 and 35 respectively, were relentless in scoring a final that did not last an hour and a half and in which they connected 26 ‘winners’ and 6 direct aces, and did not offer any ball from break in the whole crash.
For the Croatian Dodig it was his second crown in a ‘slam’ tournament after becoming champion at the 2015 edition of Roland Garros when he teamed up with Brazilian Marcelo Melo.
The veteran Balkan player also became the second Croatian doubles player to reach more than one Grand Slam crown, for which he joined the feat achieved by his compatriot Mate Pavic, who has the Australian Open (2018) and Open titles. from the United States (2020).
For his part, his teammate Polasev became the second Slovak tennis player to lift a Grand Slam title in any modality after his compatriot Daniela Hantuchova achieved four greats in mixed competition throughout his career.