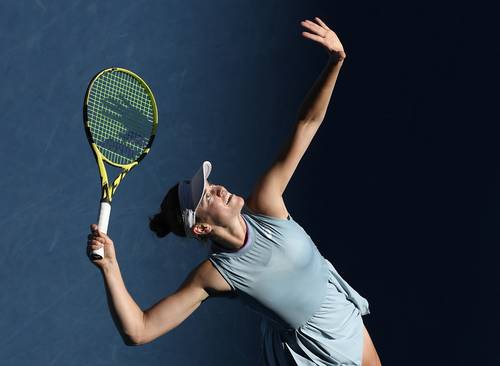 Melbourne. Visibly relieved of his abdominal pain, Novak Djokovic became the first Australian Open finalist after beating Russian Aslan Karatsev without excessive difficulties, 6-3, 6-4 and 6-2, while the American Jennifer Brady defeated the Czech Karolina Muchova to reach the decisive game against Japan’s Naomi Osaka, who had advanced by eliminating Serena Williams.

The Serbian will play the final for the ninth time at Melbourne Park, where he will try to prolong this idyll by maintaining his perfect record and lifting his ninth title against the winner of the duel between Russian Daniil Medvedev and Greek Stefanos Tsitsipas.

The world number one, who after the elimination of Rafael Nadal in the quarterfinals will surpass the Swiss Roger Federer’s record of weeks in that position on March 8, with 311, ended the adventure of Karatsev, the great revelation in Australia and 114 of the world that came through the qualifying tournament, where he aspired to become the first tennis player to play the final on his debut in a Grand Slam tournament.

But the Russian did not have many options against a Nole who seems to have overcome the physical problems he suffered in his long-suffering victory against the American Taylor Fritz and that even led him to question his continuity in Melbourne.

In the women’s draw, Serena Williams, on her way off the track after another attempt to claim her 24th Grand Slam title frustrated by Osaka, stopped and put her hand to her chest as the thousands of spectators who witnessed her defeat by 6-3 and 6-4 stood up to applaud him.

Was this your way of saying goodbye? If I ever say goodbye, I would not tell anyone, replied the American tennis player, 39, with a smile at a press conference after the game.

When the next question brought the conversation back to the sheer number of failures he made during the match (twice as many unforced errors, 24, as winners, 12), Williams shook his head, sobbed, and said: I’m done, before quitting. suddenly the press room.

On Saturday, third-seeded Osaka will face Jennifer Brady, who opens in a grand finale. Brady (22) advanced by winning an epic final 18-point game in which she beat Czech Karolina Muchova (25) 6-4, 3-6, 6-4 in the other semifinal. The American fell backward over the baseline after saving three break points and converting her fifth match point when a Muchova forehand went long.

On the other hand, the final phase of the Fed Cup 2021, the women’s tennis tournament equivalent to the men’s Davis Cup, which was to be played from April 13 to 18 in Budapest, was postponed until the end of the year due to the pandemic, announced the International Tennis Federation.