London. Russian Daniil Medvedev prevented Spanish Rafael Nadal from playing this Sunday for the ATP Finals, the masters tournament that has been denied him and that brings together the best eight in the world in London, after coming back in three sets (3-6, 7 -6 (4) and 6-3), to meet in the final with Austrian Dominic Thiem, who beat world number one Novak Djokoic, in a spectacular duel that was defined by 7-5, 6-7 (10/12 ) and 7-6 (7/5).

Nadal has won everything: 20 majors on all surfaces, 86 ATP titles, five Davis Cup titles, two Olympic golds, including doubles, but the ATP Finals continues to elude the Spanish. A decade ago, either he did not play or he arrived very just after the demand of the whole season, and in his last attempts he has run into a new generation capable of everything, including his executioner yesterday: Medvedev, who continued to close the doors to Nadal at the Masters and scored his first win against the Spanish.

Nadal ran out of gasoline midway through the third set, accumulating balls to the net and without his usual energy, while Medvedev maintained his level, which served him to achieve his fourth victory of the week and play the game for the title of a tournament in which he debuted last year with three losses in the group stage. 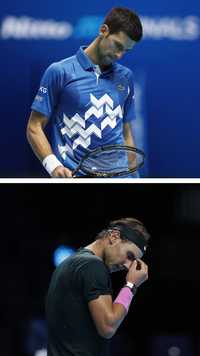 ▲ The Serbian, first in the world list, and Nadal, second, leave the tournament that brings together the eight best in the world. Photo Ap

At the 02 Arena in London, without an audience due to the pandemic in its twelfth and final edition before the tournament moved to Turin, Thiem had prevailed in the first set by taking advantage of his only break. Both players saved their serve in the next one, which fell from Djoko’s hand, after Thiem had four match balls.

Clearly it was a mental battle, I thought that after my first big title in New York I would be calmer at key moments, but I was just as nervous as before, Thiem said.

I don’t think he played badly, but he hit with all his might and everything inside, finding angles … What could he do? He deserved to win, Djokovic concluded.