The bells of Notre Dame rang to a different beat in one of Walt Disney Pixar’s most original, daring and dark classics, ‘The Hunchback of Notre Dame‘. The film is 25 years old since its premiere, but its legacy is still present.

In 1996, Walt Disney Pictures was at the top. They came from signing instant classics like ‘Beauty and the Beast’, ‘The Lion King’ and ‘Aladdin’, but one of their next films wanted to go where no other had gone before. It is hard to believe now from a distance that from the studio they conceived an animated film with a family vocation that would adapt the novel by Victor Hugo, a dark and hard story in which a deformed man is censured by an intolerant society. And while the Disney version cut down on some of its harsher aspects considerably, the end result still contains some wildly traumatic moments.

Even so, the secret of the success of ‘The Hunchback of Notre Dame’ is not in its most bitter flavors, which there are, but in how it got balance them with a few doses of love, camaraderie and hope. Yes, also with singing gargoyles and pipe-smoking goats.

How the movie got a family rating

One of the great mysteries that has surrounded ‘The Hunchback of Notre Dame’ has been how Walt Disney Pictures managed to keep its rating at ‘Suitable for all audiences’ despite its darkest parts. The truth is that the association in charge of these classifications in the United States, the Motion Picture Association of America (MPAA), did not entirely agree with some aspects of the filmBut she was very kind in asking for minimal changes. And quite curious.

As the film’s directors have revealed, Gary Trousdale Y Kirk WiseIn an interview with The New York Times, the biggest problem came with Judge Claude Frollo, the antagonist of the story. And that they had already made him a member of the judicial system and not of the ecclesiastical to avoid problems with the Church. On the one hand, they complained about his solo song, Hellfire, a song in which the character sings about his faith, the unbridled lust he feels for Esmeralda and his hatred for gypsies. Quite a time bomb. “We never thought that we would get away with the term ‘hellfire'”, has acknowledged Trousdale on the sequence.

But the problems were fixed with a little technical mastery. One major complaint they received was the use of the word “sin.” Trousdale recalled that the MPAA was “uncomfortable” with Frollo singing: “This burning desire is turning me to sin” (in Spanish it was translated as: “Burning desire drags me towards Evil”). But, with the soundtrack already recorded and the animation ready, they found the solution, proposed by the producer. Don hahn, of distorting the word a bit on the sound track with the noise of the robes of the hooded men. In the video that crowns this article we analyze the complete song, with other details such as Esmeralda’s naked body between the flames (which the creators had to cover with the outline of their clothes) and other problems that the MPAA put into production. 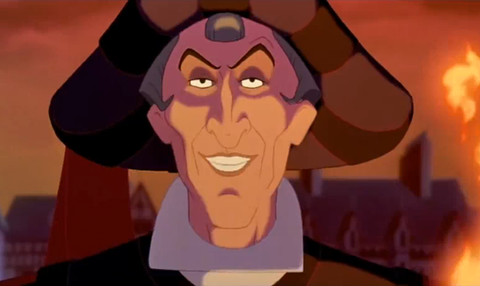 But ‘Hellfire’ wasn’t the only Frollo moment that needed a touch-up. At one point in the movie, the villain approaches Esmeralda from behind and smells her hair in a very disturbing way. Apparently the sound of that sniffing had to be lowered. “They said, ‘Could you turn down the volume on that?’ And we did, and it was rated suitable for all audiences, “said Kirk Wise.

As we noted in the video, if the MPAA had not been kind to their scores, ‘The Hunchback of Notre Dame’ could have been the first Disney film not to be considered suitable for children since the premiere of ‘Taron and the Magic Cauldron’. Even so, the most surprising thing is that the board did not have more problems with other images that are presented in the film, from the collective abuse against Quasimodo at the beginning of the film to the dramatic scenes of the outcome, passing through the extreme sexualization of Esmeralda. 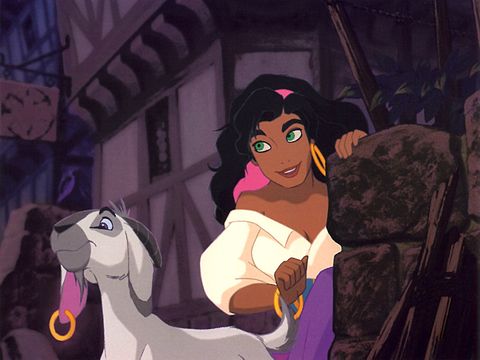 If we think about the past of Walt Disney Pictures, we will be surprised to review some stories and find heartbreaking plots, quite controversial characters and images that perhaps, today, would not have made the cut. The death of the mother of ‘Bambi ‘? The drunkenness of ‘Dumbo ‘ with the pink elephants? The racism of ‘Peter Pan’? The massacres of ‘Mulan ‘ with children involved? The hanging of Clayton in the vines of ‘Tarzan‘? All ‘Pinocchio‘? Even the fact that Cruella de Vil would like to kill dogs to make a coat has been denied in the new ‘Cruella’ to make her a less controversial antiheroine. Of course, In the race for the title of ‘Disney’s darkest film’, competition is not lacking. Still, we have to give it to ‘The Hunchback of Notre Dame’.

In the movie, the story begins with a family being arrested, a woman being murdered with a baby in her arms and Frollo, the person responsible, about to throw the creature into a well because he considers it a demon. Luckily the priest of the cathedral stops him and that baby will become Quasimodo, the hero of the story, but that dark beginning seems extreme even for the study that devised the death of Mufasa. Even so, the risks that its creators took to raise a project with such an adult tone were worth it: although it is usually left behind when we remember the golden age of the studio in the 90s in favor of other more beloved titles, the film is an animated triumph that continues to surprise 25 years later.