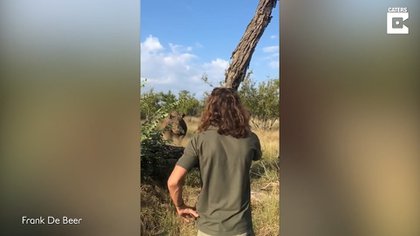 The terrifying moment in which a man manages to chase away a rhino that is about to charge a group of people using only his voice was recorded on video.

Frank De Beer, 25, was visiting South Africa’s Kruger National Park when he noticed a huge rhino stalking his group behind the bushes.

With no other alternatives, the group had no choice but to face the animal and try to scare it away.

In the recorded images, the rhinoceros can be seen pouncing on the group at full speed, about to charge, until Frank’s cousin Christopher decides to face and yell at the animal.

To the surprise of everyone present, the rhinoceros listened and withdrew.

Rhinos are generally friendly and reserved, but they are definitely not peaceful. If they feel threatened, they will go into an attacking position and will often charge in an attempt to rid themselves of the perceived threat.

The best way to avoid these types of situations is by not approaching a rhino. However, if, as happened with these people, the rhinoceros is too close and reacts with an attack, one of the recommended tips to avoid being hit is to scream, make sounds that are not familiar to a rhinoceros.

Other tips encourage you to stay still to take advantage of the fact that rhinos’ eyesight is as good as a mole’s and hope to go unnoticed; Climb a tree; or zigzag running.