There is scientific consensus to establish that the extinction of most dinosaur species was the consequence of the impact of an asteroid (or meteorite) on Mexico that caused gigantic tsunamis, terrible forest fires and enveloped the entire Earth in a toxic atmosphere that ended up destroying the great creatures that populated the planet.

A global catastrophe directly due to the heat of the impact and indirectly due to global cooling since the matter ejected from the Chicxulub impact crater reflected the thermal radiation of the Sun. Although this is the most accepted theory about the end of the dinosaurs, it has been decades since the Paleontologists debate whether the 160-million-year reign of the most fearsome creatures that have ever traveled our planet would have been different without the asteroid impact.

Were the dinosaurs endangered?

An international study published in the journal Nature Communications offers new clues (not conclusions) by ensuring that the survival of the dinosaurs was already in question ten million years before the final tragedy.

Scientists have studied the six most abundant dinosaur families during the Cretaceous, their evolution and successful expansion until 76 million years ago showed a sudden recession. Their extinction rates increased and the rate of origin of new species decreased progressively, but relentlessly.

Using Bayesian statistical models on 1,600 fossil-dated dinosaur records, they have concluded that large species were in decline due to two main factors. The first was a climate change towards colder temperatures that made life difficult for these creatures that probably depended on warm temperatures.

The consequent loss of herbivores made ecosystems unstable and prone to cascading extinction. “We also found that the longer-lived dinosaur species were more prone to extinction, perhaps reflecting that they could not adapt to the new climatic conditions on Earth,” they explain. «This was a key moment in the evolution of life. The world had been dominated by dinosaurs for over 160 million years, and as they declined, other groups began to dominate. ‘

The main group on the rise were the mammals that began to increase in number of species before the dinosaurs became extinct and after the impact, they had the opportunity to build new types of ecosystems that we see today. “Most of the dinosaurs were so large that they probably hardly knew that the small furry mammals were there in the undergrowth,” they describe. 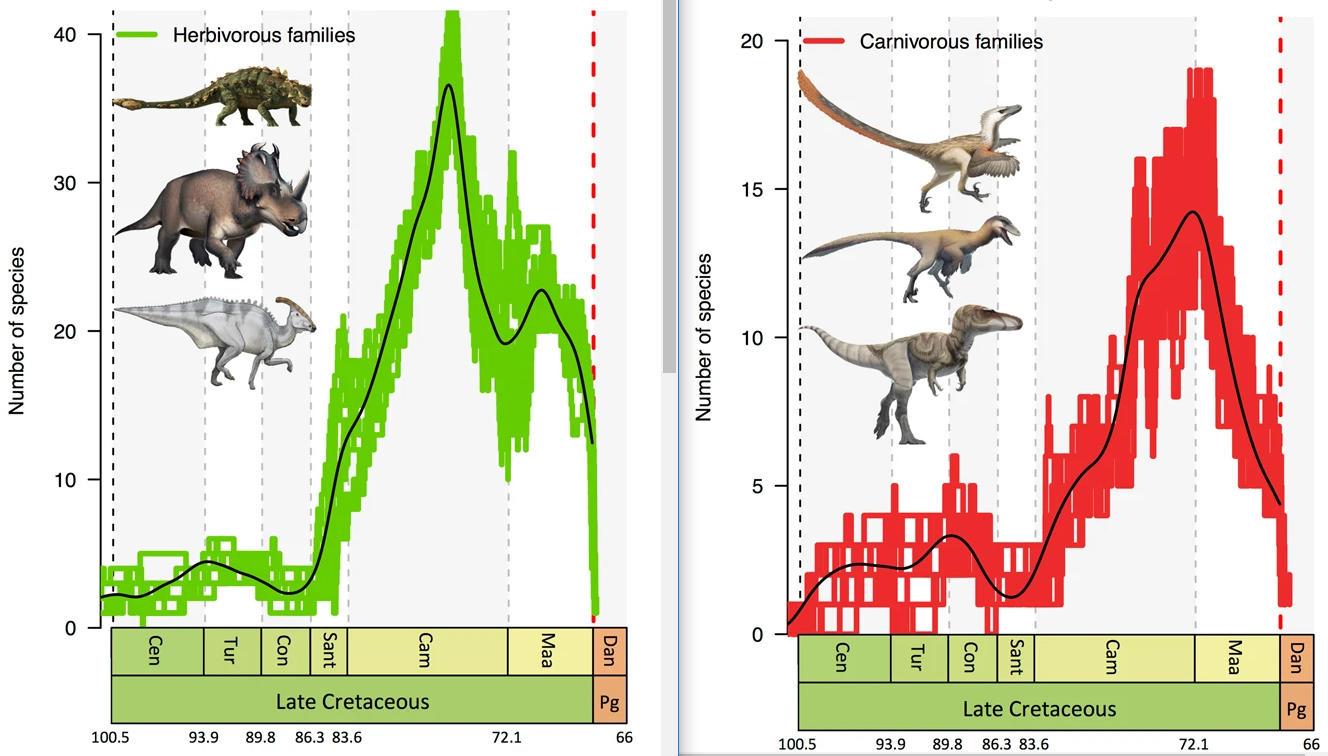 The conclusions of this international group are explained: the biodiversity of the dinosaurs decreased long before the arrival of the asteroid. The asteroid impact was the fatal blow for these animals, but their survival was already influenced by ecological and environmental pressures like many other periods since the formation of our planet.