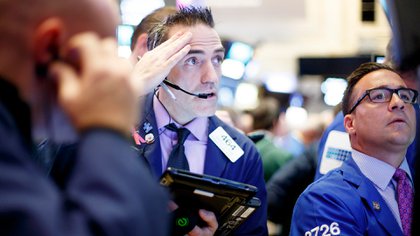 The massive influx of small investors brings unforeseen volatility to the markets.

The financial round had a negative run due to a determined taking of profits abroad, which was also observed in the valuations of Argentine bonds and shares. Within this dynamic, the jump in the price of the shares of Supervielle Group, that before noon soared 59% on Wall Street, to $ 3.46, its highest price since January 10 of last year.

It did not last long. Finally, the The rise was limited to a not inconsiderable rise of 9.6%, at USD 2.39, which also leads to imagine the trend of losers left by this bet in intraday transactions. 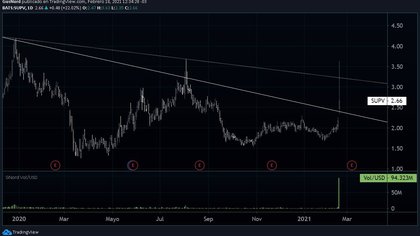 Among the market agents consulted by . various versions transcended, none with official confirmation, from the interest of a major foreign bank for staying with the Argentine group -version denied from the bank itself-, to the eventual issuance of a local cryptocurrency through the entity.

Other operators pointed out that behind the interest in Supervielle’s securities may have genuine fundamentals, Opportunity purchases pending the fourth quarter balance sheet, which will be presented in the next few days and could yield a favorable result above expectations. Also Supervielle’s intention to acquire the CMR credit card, a business unit with 300,000 customers belonging to the Chilean group that owns the stores Falabella and Sodimac, which announced the closure of its operations in Argentina.

After comments in the Reddit investor forums, the volume traded in the ADR of Grupo Supervielle multiplied by 100

Also from the market came the idea that “the company never had an idea of ​​what happened, they found no explanation for the rise.” The bank, probably at the request of its lawyers, chose not to comment despite the unusual escalation of its actions.

However, these reasons they do not explain the incredible volume that the bank’s ADR traded, about USD 59.4 million, more than 100 times above the daily average, which does not reach $ 500,000. 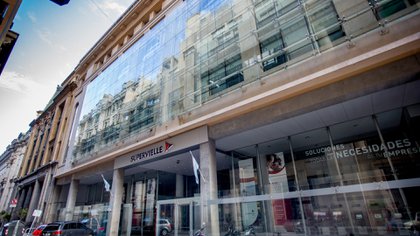 The appetite abroad could start from the forums of small investors in social networks, the so-called “trolls” of Reddit, which in recent months have taken center stage by searching for stocks that are worth “pennies” on the dollar and offer a “upside“ or short-term upside potential that promises multiply the investment several times, usually a small amount that justifies risk taking.

On Wednesday afternoon, through a comment on the “Penny Stocks” sub-forum of the social network Reddit, a user recommended Grupo Supervielle’s action: “shane_andy” pointed out that the Argentine group “in the long term is going to issue ( Negotiable Obligations) and has dividends. All Argentine banks are going to run soon. It’s easy money ”. 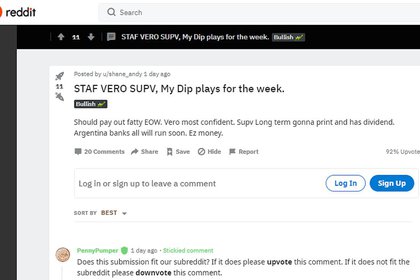 Supervielle’s ADR was already advancing 20% ​​in dollars in the “pre-market” and after the opening of the businesses in New York, at 11:30 am in Argentina, it shot up almost 60%, to its maximum value in 13 months.

On another small traders forum, The Stock Sniper, with 200,000 Twitter followers, it was noted in the morning: “Supervielle almost stopped around $ 3.6. One of the cheapest Bitcoin is developed there. It was over $ 33 in 2018. Your chart has a ton of range (up) if you let it loose. I will be sitting on the offers to accumulate today ”.

The “virtual trader” StanTradingMan also harangued the SUPV action from his Twitter account, with more than 100,000 followers: he risked today that the role of the Argentine bank could reach USD 10 per unit. 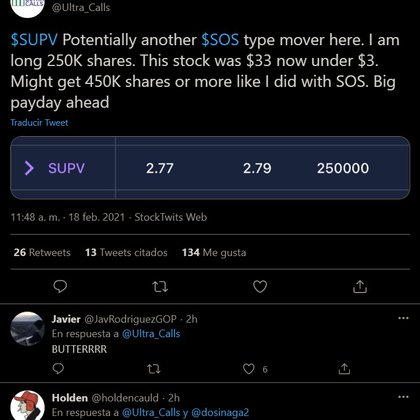 “There was a lot of speculation, it seems that the volume also came (fired) by a Twitter user who was ‘pumping’ the shares. He says he bought 250,000 and that it is ‘given away’. Others are adding, there are 200,000 followers that it has, quite important. But also in the same tweet they mistake Supervielle for a bitcoin miner, so it’s all very confusing, that’s why it is falling apart now from the highs”, Commented Gustavo Neffa, Director of Research for Traders, to ..

Also on the financial site “The Motley Fool” a post by analyst Rich Smith pointed out fundamentals of the Argentine holding company that could explain the spectacular climb of the wheel, among them, an expected positive balance for the fourth quarter of 2020. “Yes Grupo Supervielle reports something better than the lousy numbers expected reported, the stock could still ramp up with earnings. That’s it what investors seem to be betting on today in day, ”he explained. 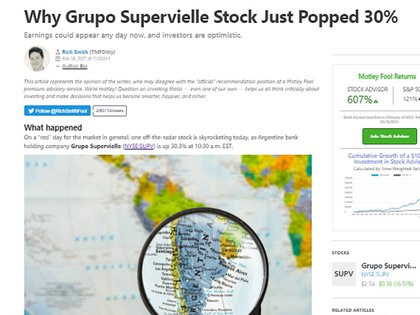 The analysis of “The Motley Fool”

“That was circulating today all day. I’m not sure honestly, but in one such a small square in volume as Supervielle is, any investor rush could produce that. Anyway, I reiterate, I don’t know if that is what drove the demand ”, stressed the economist and financial analyst Diego Martinez Burzaco.

Gustavo Ber, Economist at the Ber Study, highlighted that the paper mobilized “a lot of volume and volatility reflecting speculation “, although he acknowledged that only “the same versions circulating in the market of a possible sale, among other more absurd ones, had an impact on stock market operators … We’ll find out about the reality. We’ll see if it’s the guys from Reddit – it would be amazing if they added it to their entertainment. “

Surprise in the markets: Grupo Supervielle’s share shot up 60% in dollars

Dollar today: the free price fell to $ 148, while currencies traded on the Stock Market fell sharply

What is the yellow light that was lit on Wall Street, worries the markets and can also complicate Argentina