Home>World>Diakhaby told the referee that Cala called him a “shitty nigger,” according to the minutes.

The French Mouctar Diakhaby, defender of the Valencia, he commented to the referee of the match against the Cadiz in the Ramón de Carranza, the Catalan David Medié Jimenez, that the local Juan Cala called him “black shit”, which caused the interruption of the game for 24 minutes for the withdrawal of the Mestalla box.

As reflected in the arbitration act, the referee explains that in minute 29 he interrupted the match “due to a confrontation between players from both teams.” “Valencia CF player No. 12 Mouctar Diakhaby, once reprimanded for arguing with an opponent, tells me verbatim:” He called me a shitty black man “in reference to Cádiz CF player No. 16 Juan Torres Ruiz”, he says.

Medié Jiménez assures in the document that “This fact was not perceived by any member of the refereeing team” and that “after a few moments, Valencia CF decides to leave the field of play. For this reason the match is temporarily suspended. Both teams go into their respective changing rooms.” 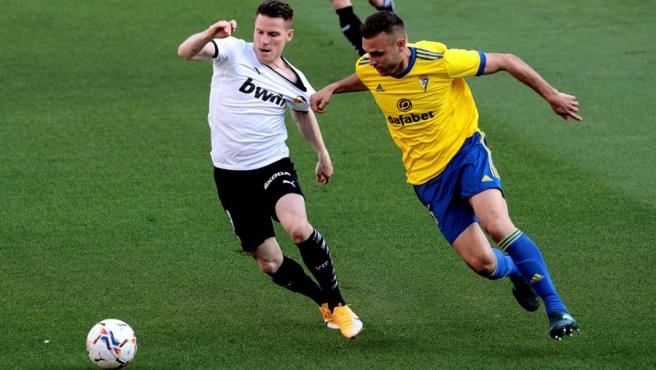 “After a few minutes of suspension, the Valencia CF delegate David Rangel Pastor, in the presence of the Cádiz CF delegate Antonio Navarrete Reyes, informed us that they decided to substitute player No. 12 Mouctar Diakhaby and continue with the game. Furthermore, it was agreed to give five minutes of warm-up for both teams in order to avoid injuries. The game resumed 24 minutes after stopping it, developing normally from that moment, “says the referee in the minutes.