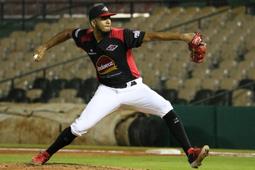 With a great team work led by the starter Denyi Reyes, the Lions of El Escogido defeated the Gigantes del Cibao 3-1 on Wednesday at the Quisqueya Juan Marichal stadium.

Reyes threw four innings in which he struck out two opponents, allowing just two hits, but came out without a decision.

Reyes were followed by Franklyn Kilomé, Travis Radke, Jimmy Cordero and Jumbo Díaz, who allowed only one hit to the francomacorisanos.

In the ninth, Steven Wilson struggled to allow a lap and a pair of hits, but managed to get the save (1).

The victory went to Kilomé (1-0), who in one chapter and two thirds gave a walk and they connected a hit. Dustin Crenshaw (0-1) took the backhand as he tolerated all three scarlet runs.

With the win, the Chosen One improves to 2-2, as do the Giants.

The Lions woke up early with three touchdowns in the first inning, which opened Chas McCormick with an infield-hit for third and Cesar Puello with a single to right field that pushed McCormick, who had ripped off second base.

Wander Franco reached base on the mistake of third baseman Jake Elmore, and Nate Lowe walked to fill the pads. Another single in the frame by Julio Y. Rodríguez led Puello to the rubber with the second scarlet line, thus keeping the bases loaded. The third round came on Joe Dunand’s sacrifice fly to center, driving in Franco.

In the ninth, the visitors put runners on third and second with one out, and a Jason Krizan sacrifice fly drove in the colts’ only run.