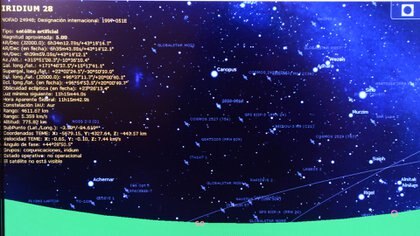 Stellatium: with this program, the CIAE carries out astronomical and satellite monitoring. Photo: Fernando Calzada.

Photographs showing strange elements in the sky, footage of unidentified flights and accounts and drawings of suspected UFOs, are they proof that we are not alone in the universe?

Identifying what happens in the atmosphere, and beyond it, with respect to the national sky is the main task of Rubén Lianza, a (retired) Commodore of the Air Force in charge of the Aerospace Identification Center (CIAE), an area that, in addition to paying attention to aerospace phenomena, acquires greater strategic relevance year after year when it comes to imagining future conflict scenarios.

“We were incorporating capabilities, such as softwares image analysis. In addition, we have specialized in satellite monitoring. For example, if a person observes a flash in the sky, we can corroborate if it was a satellite Iridium (a company dedicated to satellite telephony). We can confirm that, and even provide the serial number of the satellite causing the flash ”, says Lianza., who, as a test pilot, was not only lucky enough to fly different aircraft within the Force, but also took courses related to image interpretation and analysis in France and was able to improve professionally in the United States.

From his office in the Cóndor building, the officer can track satellite movement around the world. In 2018, he was one of those in charge of monitoring the national sky, when it was estimated that the remains of the Chinese space station Tiangong 1 – which had been left out of control – could fall in Argentina. In real time, he tracked it to its last orbit and, by being in contact with the US Joint Space Command, was able to immediately inform the local military authorities about the place where those pieces fell.

The work carried out by the CIAE is of vital importance since, by tracking the space debris to its place of fall, they can help mitigate the damage to the population, preventing, for example, the inhabitants of the affected area from removing elements highly polluting and corrosive, such as spherical hydrazine tanks. 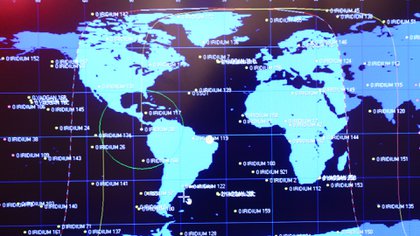 Orbitron is another of the satellite monitoring programs used by this Center. Photo: Fernando Calzada.

In addition to the satellite monitoring carried out by this identification center, the Air Force provides a public service by receiving all the complaints related to the sighting of unidentified objects that the public sends them for analysis. “We make identification in optical range of everything that moves from the horizon upwards. We even keep a record of the income from space scrap so that, if necessary, we have to deploy it to the field, we can identify its nature and origin. We notify CONAE and the Ministry of Foreign Affairs so that they can contact the launching country“, explains and adds that the information regarding the positions of the satellites is very accurate and comes from the Joint Space Command, dependent on NORAD (North American Aerospace Defense Command), where the United States tracks and updates the parameters of all traffic orbital (including space debris) and provides that service to all countries of the world.

The Center uses a software developed in France for optical reconnaissance with Helios satellites and also used by GEIPAN (Group for Study and Information on Unidentified Aerospace Objects), in addition to others softwares Add-ons, open source, British, North American and Polish. In this sense, Lianza reveals that the intention is to be able to acquire sensors with a stepped laser-radar system to be able to do geospatial intelligence: “It is the same as an anti-aircraft system does that, instead of using conventional artillery, uses optical artillery to identify satellites that pass over national territory ”.

SIGHTING OF AEROSPACE PHENOMENA IN ARGENTINA

What is the reason for this office? “There are general and specific reasons that justify the existence of an organization like ours: within the general ones, to be able to generate knowledge about aerospace identification, developing and disseminating methods that allow us to separate, effectively and quickly, everything ordinary from what people consider extraordinary. This is done with the aim of clarifying, with the highest degree of certainty, everything that, at first glance, does not seem to have an explanation ”, sums up the Commodore.

Regarding the specific reasons, Lianza explains that the identification of the optical range is crucial for decision-making, both in peacetime and in conflict. “Because if an object must be ordered to be intercepted, this decision will be based if, previously, it was identified,” he details and adds that there are also certain objects that move outside the range of the interceptor fighter. In fact, remember that, in 1985, two Mirage planes had to take off to intercept an object that was 18 miles high. “The maximum ceiling of that aircraft is 17 km, so it could never have reached it. If the altitude of the object had been known (with a rangefinder, for example) and there had been enough optical artillery to identify the object, the best mode of action would have been to keep the planes on the platform ”. The object turned out to be a French experimental balloon launched from South Africa. “Today, our doctrine of employment to intercept aerial targets is that, first, it must be identified and only later, if it is considered necessary, to issue the interception order,” he says. 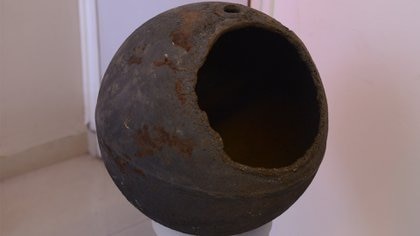 Remains of a hydrazine tank that fell in 1974, near the town of Ayacucho, Buenos Aires province. Photo: Fernando Calzada.

The scope of this center, maintains the officer, is multidisciplinary. In fact, they collaborate with other organizations and, in addition, the technology and methodologies they use allow them to provide a service to the community with reliable and auditable information, “so that the questions that people and aviation professionals ask themselves have a certain answer. and precise ”; an educational facet that the Air Force has.

From the operational point of view, there is also the need to have an armed body, in times of peace, that, in the event of conflict, can quickly become a filtering center for analysis of photos and videos of objects recorded from the horizon to above, “where the angular size of the object turns out to be the most important parameter. With this data, both the distance and the size of the object can be obtained ”, he reflects.

What is the applied methodology about? First, they plan the research, then collect all the information, analyze it, present the results and, from this instance, decisions are made. With the conclusion ready, they carry out process feedback. “If new and better evidence appears to refute the first hypothesis, the whole cycle begins again,” he reveals.

In the information analysis phase, where citizens’ inquiries come in, they developed a table in which they work with testimonies and evidence. “On our website, people can find a form and are also asked to attach some kind of evidence: photos, videos or a well-drawn drawing. Hard data is given the utmost importance: from which location it was seen and in which direction it was headed, whether the object remained stationary, its elevation above the horizon, and obviously the exact date and time of the sighting. When we have the presumed cause, we apply the suggested method for that hypothesis, the analysis is carried out and the conclusions are formulated, we put everything into a final report ”, he says. For example, if they suspect that it is a stain on the camera lens, the first thing they do is call the witness and ask for the next photo. If this image also has the stain, the first hypothesis is confirmed. Sometimes the only way to know what the object was is by applying sophisticated blur removal tools with software brought from France. “By following these methods, we have managed to resolve 100% of the causes that have been sent to us and that have met the requirements of testimony and evidence,” he says. The vast majority of causes are caused by internal camera problems, lens flare, burnt pixels, or also insects and birds that crossed in front of the camera. To a lesser extent there are the cases of: balloons, airplanes, meteorites, flashes of Iridium satellites and even Venus and the Moon. 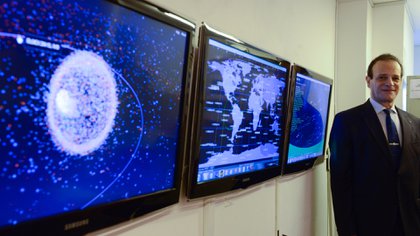 According to Lianza, they have resolved the total of the queries they received and adds that the vast majority are caused by internal problems with the cameras, lens reflections, burnt pixels, or insects and birds that cross in front of the camera. Photo: Fernando Calzada.

Lianza, with the passion that defines him, remembers an observation from a Ramos Mejía neighbor: “It was a very nice case. He wanted to take a photo of an airplane and, at that moment, two objects appeared in the image that turned out to be a pair of herons. The witness was following an aircraft with his camera in the opposite direction to that of the birds. Of course, these, when moving in the opposite direction to that of the camera, came out very blurry ”. At that time, he says, he was able to teach the person concerned all the mathematical formulas to calculate the angular size of the object by counting the pixels of the sensor. “We still didn’t have the French software (which does all the calculations automatically) and, until then, we had to do the calculations on paper,” he says. In gratitude, the witness – who turned out to be a talented painter – presented him with an oil painting of a perched heron.

“People who send us photos or videos can trust the Air Force to know, with a decent degree of certainty, what it is that they observed. Our approach is totally neutral, without denying spirit, but also not running after the paranormal. We let the evidence speak for itself. We do the same if the information was requested by the authorities or other State agencies ”, he ends before continuing his work, which has intensified in recent times since, as he says, this year they received the largest number of requests for reports and analyzes. of cases by citizens.

Iván Durigón: “We need the Military Manufacturing seal to have a presence again”

The war behind 5G: the bid for global control of the network and access to data