Rescuers continue to search for possible survivors of the landslide.

At least 3 people died and 99 are still missing, according to local media, although the authorities maintain the figure of 1 dead because of the partial collapse of a 12-story residential building in Surfside, in Miami-Dade County in Florida, where rescue teams continue to work through the rubble looking for possible survivors.

Despite the fact that the authorities maintain the figure of one dead, local TV channels like WPLG raise the deceased to three after the collapse of the Champlain Towers building, in the aforementioned city near Miami Beach, due to undetermined causes.

A wing of the 12-story building in the Surfside community collapsed with a roar around 1:30 a.m. Wednesday.

By late afternoon, nearly 100 people were still missing, authorities said, raising fears that the death toll could rise considerably. Emergency officials did not know how many were in the tower when it fell and also They are asking people to call 305-614-1819 if they have family members whose whereabouts are unknown.

If you live at the Champlain Towers at 8777 Collins Avenue, please complete a Wellness Check Form as part of Miami-Dade County’s efforts to ensure all tenants of the building are located: https://t.co/7sGY83fDvQ #SurfsideBuildingCollapse

Surfside Commissioner Charles Kesl said he is hopeful that more people can be rescued from the rubble of the partially collapsed building in his community, but “realistically, I’m not sure how many or if anyone will be recovered and found with lifetime”. 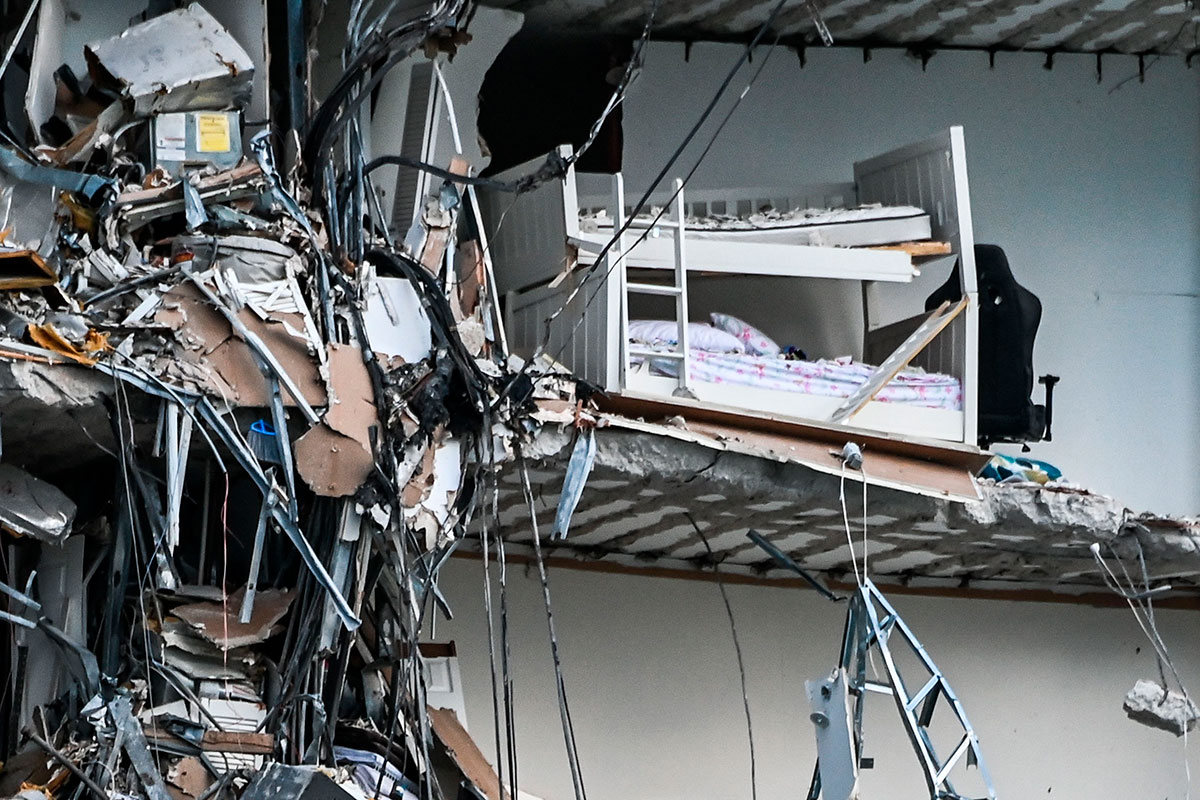 99 people are missing after the collapse of the Champlain Towers building in Miami Beach. / Photo> CHANDAN KHANNA / .

About 21 hours have passed since the disaster, but Surfside Mayor Charles Burkett said he has the hope that first responders can still save trapped people among the rubble. Burkett said the rain may complicate efforts, but authorities “will move on.”

Burkett said at least 10 people, including the person who died, were treated for injuries at the scene. One person was taken to the hospital in critical condition. He added that 15 families left the building on their own.

In total, 55 of the 136 apartments in the building collapsed at around 1.30 (5.30 GMT) amid a great roar, which made the residents, who were sleeping, believe that it was an earthquake, some of them told the media.

Rescue will continue through the night

Miami-Dade County rescue teams will work four-hour shifts throughout the night searching for survivors of the collapsed building, authorities said at a news conference, in English and Spanish.

“This operation began very early and does not end until we find survivors and the people we are looking for,” the Miami-Dade fire department spokeswoman said at a press conference tonight. Erika Benitez.

Images of the building broadcast on television after the collapse showed ripped walls and rooms still standing exposed like a giant dollhouse, with bunk beds, tables and chairs still inside and air conditioners and cables dangling from some parts.

Florida Senator Marco Rubio said at the press conference that it is impossible for him to imagine the pain that the families of the victims are suffering at this time.

Voices under the rubble

Florida Governor Ron DeSantis said on a site visit that rescue teams had heard voices under the rubble.

Shortly after a call from President Joe Biden, to provide assistance to families affected by the partial collapse of the building, DeSantis declared a state of emergency in Miami-Dade County.

Through an executive order, DeSantis found that “a substantial part of the structure has been destroyed and the rest has become uninhabitable.”

With information from agencies