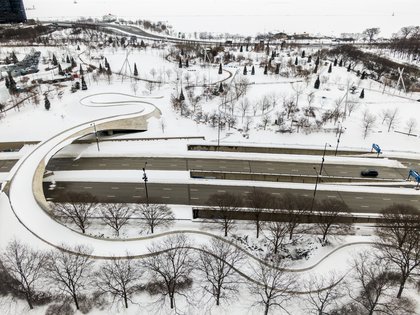 An aerial photo taken with a drone shows the PB Bridge covered in snow in Millennium Park after an overnight storm left more than 18 inches of snow on the ground and roads in Chicago, Illinois, USA, 16 de February 2021. . / EPA / TANNEN MAURY

Washington, Feb 17 . .- Some 100 million people continue to be affected this Wednesday by a winter storm that left at least 26 dead, forced the cancellation of almost 4,000 commercial flights and caused vast cuts in the electricity supply.
The National Weather Service (NWS) indicated that “conditions of intense cold and strong winds continue in most of the country” from Texas to New England.
“Another major winter storm will bring heavy snow and ice from the southern Plains and the Mississippi Valley to the Atlantic coast and the northeast,” the report added.
Some 2.5 million people are still without power in Texas, a situation that also affects 157,000 residents in Oregon and 102,000 in Kentucky.
Commercial airlines today canceled 3,890 flights and delays were reported on another 2,000 flights.
The inclement weather has killed at least 26 people, according to local authorities, including three who died from carbon monoxide from combustion heaters.
In Texas, where millions of residents have been without power since Monday, there have been protests over failures in the state’s power grid.
Governor Greg Abbott asked the legislature to investigate the Ercot power company to determine how the company prepared for the storm.
“Too many Texans are without power and heat for their homes as our state faces freezing temperatures and severe winter weather,” Abbott said in a statement. “That is unacceptable,” he added.
The NWS warned that “multiple rounds of winter weather are expected today and through Friday tomorrow” in Kentucky and Indiana. “There may be snow accumulation greater than 10 centimeters in portions of southern and central Kentucky,” he said.
NWS data and forecasts indicate that this could be the February with the heaviest snowfall in Cincinnati, Ohio in the last two decades, after an accumulation of almost 50 centimeters recorded on Tuesday.