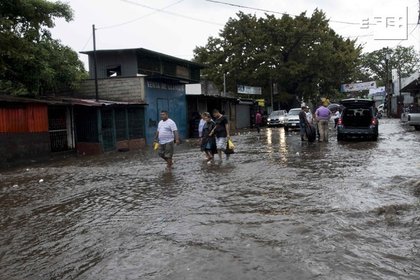 Several people walk through a flooded street due to the passage of Hurricane Iota in Managua (Nicaragua). . / Jorge Torres / Archive

Managua, Nov 18 . .- The number of deaths left in its wake by Hurricane Iota in Nicaragua increased to eight, after the death of two people who were aboard a taxi that was moving along a highway in the southwest from Managua and a tree fell on them, authorities reported Wednesday.
The fatalities were identified with Bayardo Bojorge, 37, and Ángel López, 33, who was the taxi driver.
The passengers Diana and Gabriela Zamora, twin sisters, were transferred in critical condition to a Managua hospital after the accident, which occurred on Tuesday night, according to the National Police.
So far, the government has reported the death of six people, some of whom it had denied throughout Tuesday, before confirming them.
It is feared that the number of deaths from the effects of Iota, classified as an “extremely dangerous” hurricane, will grow in the next few hours, since a landslide in the north of the country could have claimed the lives of between 13 and 20 people.
Iota, now downgraded to a tropical depression and located over El Salvador, made landfall last Monday in the northern Caribbean of Nicaragua as a category 4 cyclone on the Saffir-Simpson scale, out of a maximum of 5.
As it passed through Nicaragua, the hurricane, whose winds reached 260 kilometers per hour, caused devastation in the Northern Caribbean Autonomous Region (RACN), inhabited mainly by Miskito and Mayan indigenous people, of which nothing was known for almost 24 hours , due to damage to communication systems, and isolation caused by the overflowing of rivers, according to the Government.
The National System for the Prevention, Mitigation and Attention of Disasters (Sinapred) still does not quantify the damage, but preliminary reports indicate that Iota was more catastrophic than Eta, category 4 Saffir-Simpson, which hit the same area on November 3 .
At least 40,000 people were evacuated to 250 temporary shelter centers, of which 38,000 were in Bilwi, head of the RACN, and one of the cities that suffered the most from the impact of the two recent cyclones, according to Sinapred.
The Eye of Iota made landfall on Monday at 10:00 p.m. local time (04:00 GMT Tuesday), in Haulover, south of Bilwi, home to about 350 families with 1,750 people, mostly Miskitos.
As Iota advanced westward on Nicaragua, it caused flooding and death in the Pacific region of the country, despite its continued degradation, as its extensive bands carried moisture from the ocean, according to experts.
A red alert remains in force for the Caribbean of Nicaragua, and the yellow one for the rest of the country.