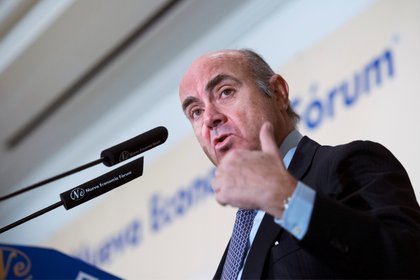 Frankfurt (Germany), Nov 16 . .- The vice president of the European Central Bank (ECB), Luis de Guindos, believes that “banks have contributed to absorbing the impact of the pandemic” by covering the increase in demand for loans and that “they have weathered the crisis so far quite well, despite some risks and vulnerabilities.”
De Guindos, speaking at the Euro Finance Week financial conference in Frankfurt, said that the banking sector “has helped prevent a credit crunch, which would have been detrimental to the economy.
But De Guindos warned that “it is urgent to address the structural weakness of the European banking sector, reducing excess capacity and increasing cost efficiency to address its persistent low profitability.”
The ECB vice president added that it is important for banks to use their capital buffers to absorb losses and continue to support the loan.
In the medium term, it is desirable, according to de Guindos, for banks to once again achieve a balance between structural and cyclical capital requirements to create space for macroeconomic prudence.
“A higher proportion of available mattresses would increase the capacity of the authorities to act counter-cyclically,” according to de Guindos.
He also stressed that European banks had problems before the crisis created by the pandemic as their stock market value has fallen due to their very low profitability, caused by excess capacities, limited income diversification and efficiency over costs go down.
“The need to address these structural issues is now more urgent than ever,” according to the ECB vice president.
De Guindos urged European banks to further reduce costs to improve their efficiency and saw mergers or acquisitions as another way to reduce excess capacity in the European banking sector.
“National merger plans in some countries are an encouraging sign in this regard,” de Guindos said.
He also warned that “investment funds continue to be vulnerable to sudden capital outflows in periods of tension in the market due to their low liquidity buffers.”
Therefore, De Guindos added that “a review of the liquidity requirements for money market funds and their portfolio composition is also necessary.”