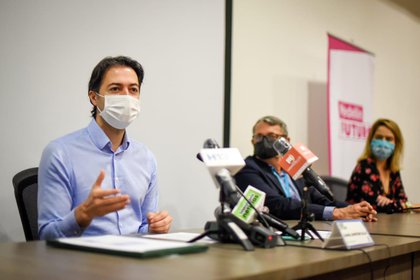 Daniel Quintero pointed out to Fajardo to divide the last elections in Medellín, with the objective that the Uribe candidate Alfredo Ramos Maya would win.

This Sunday morning, the mayor of Medellín, Daniel Quintero attacked the former mayor of the Antioquia capital, Sergio Fajardo, for his relationship with some companies in this city and with former president Álvaro Uribe Vélez, investigated for procedural fraud and buying witnesses .

In a post on his Twitter account, Quintero noted: “In Medellín, Fajardo tried to split the vote so that Uribe’s candidate for mayor would win. They are joined by GEA, EPM, Hidroituango and a country project in which the powerful enjoyed impunity while libraries, dams and 6402 innocents fell ”. 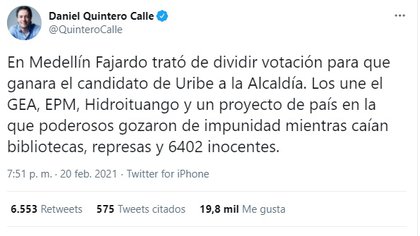 Since his Medellín administration began, Quintero has been singled out by ex-presidents of the city and the department, as well as political and collective sectors that proposed his revocation, for the management he has given to Public Companies of Medellín, Hidroituango and the Grupo Empresarial Antioqueño (GEA).

Two weeks ago, in fact, Daniel Quintero had an exchange of words with Álvaro Uribe Vélez, who requested the intervention of the National Government to EPM. What the former president and former senator said at that time was:

The National Government should think about the intervention in EPM. The rating agencies are clear, if the Corporate Government does not recover, they will lower it to BB +, it would be without investment grade and it would continue to deteriorate. Better a strong decision than later regrets

And Uribe’s publication on Twitter had a reply from Daniel Quintero, who expressed, with irony, his bewilderment when he saw the former president and leader of the Democratic Center hinting at the expropriation of one of the most important companies in Antioquia and the country, to deliver it to the National government:

I never thought I would see a trill from Uribe asking for EPM to be expropriated to give it to the National Government. While he is mayor of Medellín, EPM will continue to be public, of Medellín, of Antioquia and of all Colombians

Daniel Quintero’s accusations against Sergio Fajardo occur at two key moments for who was a candidate in the last presidential elections: the Coalition of Hope between the Green Alliance and center-left leaders (one of them Fajardo) and what would be his aspiration to represent said coalition as a candidate for the presidency.

In December 2020, Sergio was charged by the Office of the Comptroller General of the Republic, the highest body of fiscal control of the State, for failures in the planning and execution of the Hidroituango project, which triggered: that energy could not be generated, a fact that according to the Comptroller’s Office generated a loss of profit of $ 1.1 billion; the detriment to the public patrimony amounting to $ 2.9 billion, since the work ended up having $ 13 billion; and the emergency in 2018, which came close to causing a public calamity.

Currently, the Green Alliance is working on the consolidation of the so-called Coalition of Hope, facing the presidential elections of 2022, made up of this community and Ángela María Robledo, Jorge Robledo, Sergio Fajardo, Humberto de la Calle, Juan Manuel Galán and and Juan Fernando Cristo. The convergence between these personalities of the country will be made official on April 7.

The last hours of Silvano, the young Peruvian who was thrown from a bridge in Medellín: a scam, a macabre video and a transnational tragedy“Enemy of peace”: tough letter from Senator Iván Cepeda to High Commissioner Miguel Caballos