Not long ago we published the test of the Cupra León ST e-Hybrid. It was the young brand’s first foray into the world of electrification, but not the only one. Shortly after, the Cupra Formentor e-Hybrid, which arrives to play in the plug-in hybrid SUV league.

The Formentor is undoubtedly the “spoiled child” of the Spanish firm. It was his first model without a Seat equivalent and has been confirmed as an absolute best-seller, both in Spain and in other European markets. This version was added to the range after the VZ4 310 (see test) and the 1.5 TSI version with 150 hp. Then came the 150 hp 1.5 TDI and the VZ5 will crown the range with the 390 hp five-cylinder. 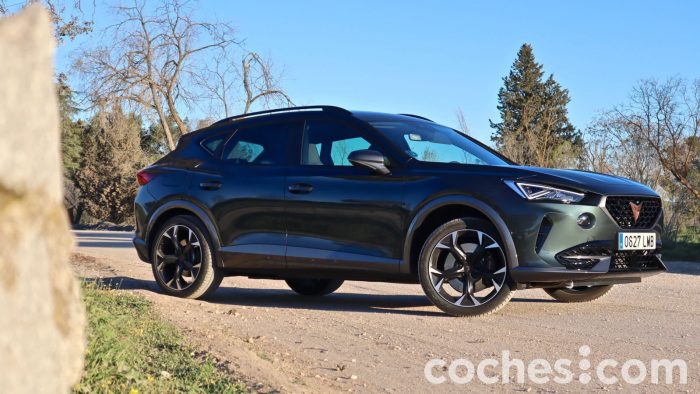 It uses the same mechanical recipe as the Cupra León e-Hybrid, with 204 and 245 HP of power, the same one that also equips numerous plug-in hybrid models of the Group, call them GTE in Volkswagen, iV RS in Skoda …

We have driven the most powerful 245 HP Cupra Formentor e-Hybrid around Madrid and its surroundings. A brief contact after which we will try to discover when it may be interesting to choose this version before others.

The truth is that there are very few aesthetic differences between the hybrid variant of the Formentor and the traditional combustion. Its external measurements are identical, 4,450 mm long (2,680 mm wheelbase), 1,839 mm wide and 1,510 mm high. It changes slightly in that it has a lower ground clearance (15.8 cm). 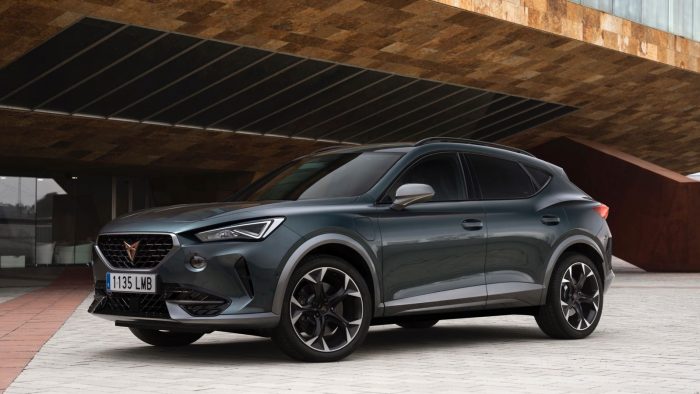 The front remains unchanged, with those lines on the hood that direct the gaze towards the CUPRA emblem on the grille and towards the A-pillars. On the left front wing we find the load point cover, one of the few differences. The rims can be 18 or 19 inches.

Very little change also in the rear, which retains these characteristic features and emphasizes the length of the bonnet while giving a lot of dynamism to the whole even when stationary. These versions have a rear diffuser with two copper colored trims that distinguishes it from the variants with combustion engine only.

Few differences compared to other Formentors, none in terms of the quality of the materials used and the details that you will not see in a Seat, such as the sports seats or the multifunction steering wheel with circular satellite buttons to start the car and change the driving mode . 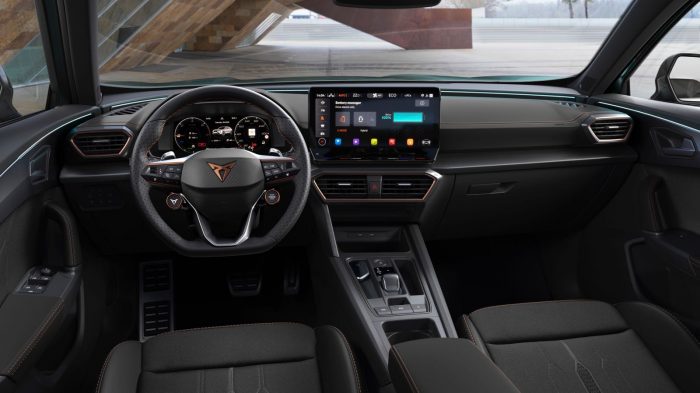 Yes, the information shown on the Digital Cockpit instrumentation screen is different, which focuses on the hybridization system, with data related to the electric range or the selected driving mode. There are six different views to choose from and the most striking thing is that the rev counter is divided into two parts, a conventional one and then a blue area that shows the percentage of electrical power delivered and a green area with the recharge level during regeneration. 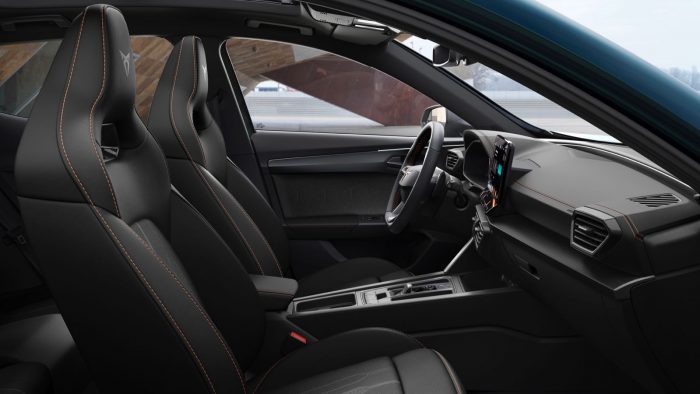 On the dashboard we have the 12-inch screen for the infotainment system (10 in the basic version). It concentrates the vast majority of functions. The console is very clean as the transmission goes with shift-by-wire technology, which uses a small gear selector. 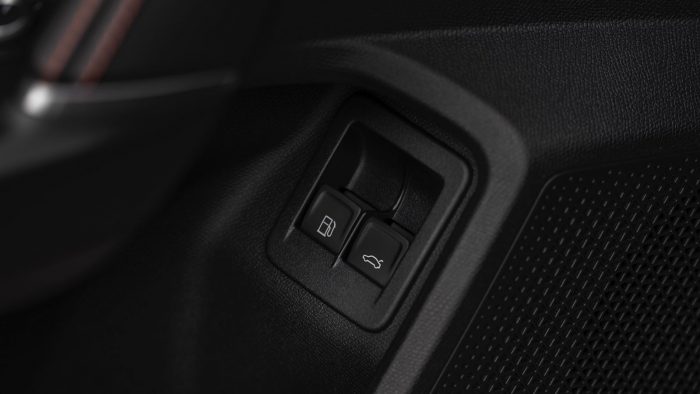 One detail that you will only see on the Formentor e-Hybrid is a button to unlock the fuel tank cap on the driver’s door. It does not open if the car is plugged in and prevents the vapors from the tank from escaping into the atmosphere and causing a fire. 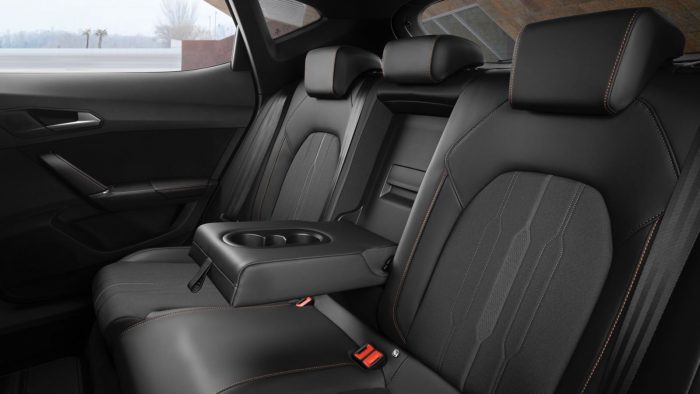 Behind … well what we have said on other occasions. Good space for two, very fair for three. Of course, you do not lose space for your feet (something common in electric cars) since the battery, which occupies 96 liters, ends just at the beginning of the rear bench.

It is common for plug-in hybrid cars to see their load capacity diminish. Somewhere you have to put the batteries and the trunk is sacrificed (the batteries, which weigh 130 kg) go under the rear seats as we said and the fuel tank, under the floor of the trunk 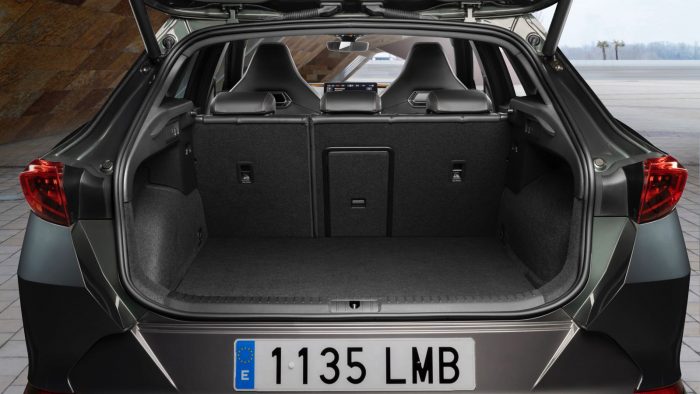 The standard equipment of the Cupra Formentor e-Hybrid is very complete. It stands out especially in the safety section, with elements such as the travel assistant, the lateral or blind spot assistant (detects vehicles up to 70 meters away), the involuntary lane departure assistant, the emergency assistant, the assistant adaptive cruise control (ACC) and predictive, and the reverse cross traffic warning system, or the door opening warning to passengers, when it detects the presence of a vehicle. 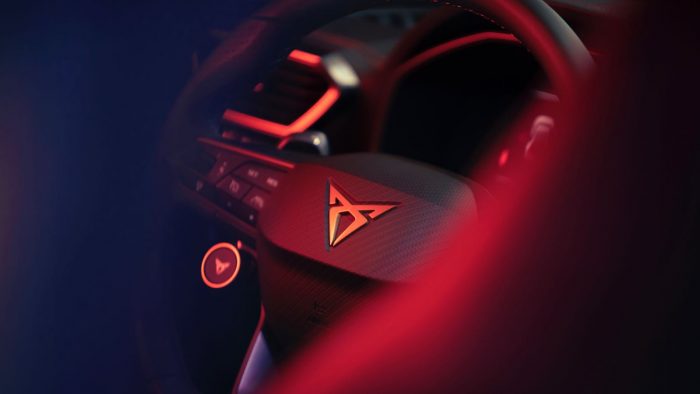 It also features the Front Assist system for automatic city emergency braking with pedestrian and cyclist detection, which now includes automatic turn assist and dodge assist. Exclusive to this version, the acoustic signal when you drive in electric mode at low speed, to warn pedestrians of your presence.

If you choose, as is our case, the more powerful VZ variant, you have details such as the sports suspension with variable hardness dampers, more assistants to driving than those mentioned. Also being able to count on more capable sports seats and brakes. There are two option packages: Safety Cool Pack (800 euros) and Tech Pack (1,300 euros). 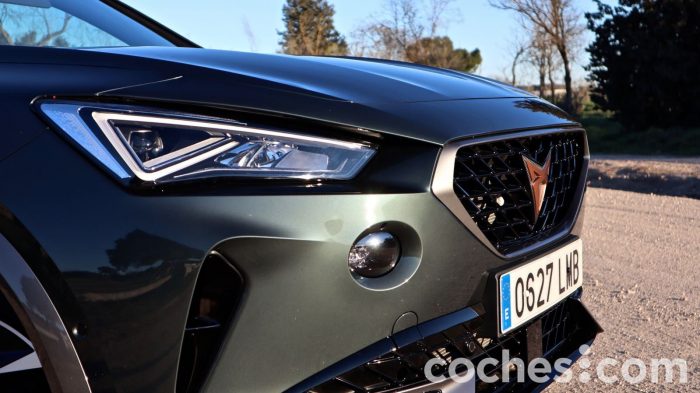 The Cupra Formentor e-Hybrid has a starting price of 36,640 euros, which amounts to 43,350 euros in the case of the more powerful VZ version. Remember that these are recommended prices. You can find offers for the Cupra Formentor, of all its mechanics, in our section of new cars, published by the official dealers of the brand. We also have interesting tools that help you finance the car and pay for it more comfortably month by month.

The powertrain is made up of a 150 hp 1.4 TSI turbocharged four-cylinder petrol engine, along with an electric 116 hp (85 kW). In this case we have in hand it delivers 245 CV of maximum power and 400 Nm of torque as a whole. If you choose the simplest variant, it stays at 204 hp and 350 Nm due to different electronic management, since the mechanics are identical.

Both are associated with the DSG automatic transmission, with six dual-clutch ratios, which sends power to the front wheels. 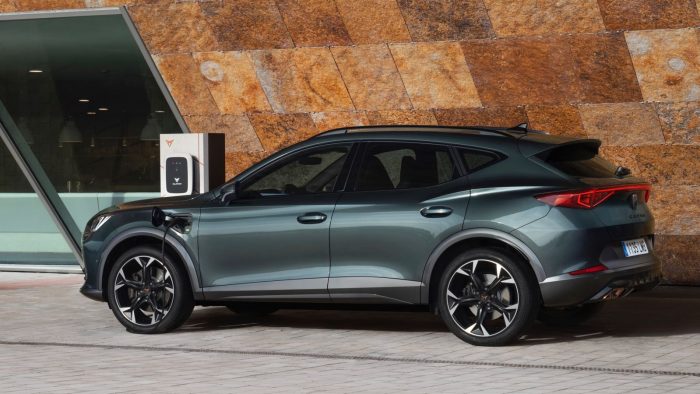 The battery has a gross capacity of 13 kWh (10.8 kWh net), with which it approves a 55 km electric range in the case of the more powerful variant. In the simplest it increases to 59 km. Thanks to this, it obtains the Zero label from the DGT and all the associated benefits. In a 3.7 kW charging socket it is fully charged in 3.7 hours. In a conventional socket, this time increases to 5.8 hours.

As the route was not too long, I decided to put the hybrid mode and have the car manage the two engines by itself (always prioritize the electric one if the battery is charged). You can also select a 100% electric mode, which is ideal for moving around the city. And select how much battery power you want to reserve to use later (or recharge it to a certain point using the combustion engine). 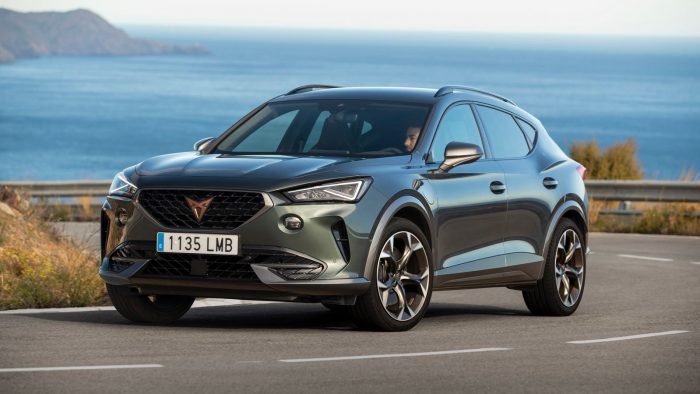 Getting around town with a plug-in hybrid is really nice. Most of the time, the Formentor moves exclusively with the electric motor, whose 116 hp is more than enough to function with ease. The touch is pleasant and despite the sportiness that is presumed to the cars of the brand, it is not a car with a hard touch (without reaching the comfort levels of the Citroën C5 Aircross Hybrid).

With the hybrid mode activated, as soon as you step on the ground the combustion engine is activated to have a very lively response and an acceleration that surprises with the promptness with which it transfers the pedal commands. 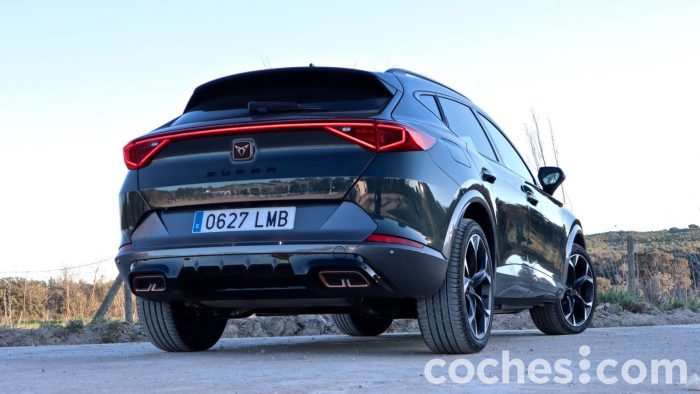 In a cornering zone, the adaptive suspension, which can be adjusted to 15 different positions, works really well. It is accompanied by a direction with a good degree of toughness. Little informative, but very tactful. Then you have the different driving modes (the Cupra Drive Profile), which acts on steering, the accelerator pedal and the DSG gearbox).

This is undoubtedly the great downside of the car in intensive dynamic use. Because it is a fabulous transmission for speed and comfort to change gears, but in this case an electric motor is added that sometimes comes into play, that other times it recharges the battery … without this marrying a driving in which you hope to dominate the car more and take it as you please. With a lively and agile, but progressive driving, everything is going well. When you want to go one point further, things don’t flow so well.

It does not make much sense to talk about consumption on a route that was not excessively long. It was barely 40 km, half in the city and half on a curvy road. In this section, always with the hybrid mode activated, we consume 1.8 l / 100 and 13.1 kWh / 100 km without going particularly slowly. We still have 46% of the battery left, enough to travel, according to the on-board computer, 20 km.

We fell in love with the dynamics of the 310 CV Formentor VZ. It is lighter than this variant, the chassis set-up is sportier (without being extremely radical) and thanks to the all-wheel drive a higher traction capacity.

Does the Formentor eHybrid offer that? Well no. It is a fast car, but it does not offer that effective touch and that transmits so much to the driver if he wants to take the car to the extreme. Okay, I did not test it for as long as the combustion one, but the sensations in those few kilometers (in very varied environments), were identical with the Cupra León Sportourer with this mechanics.

Of course, it has advantages. If you like the aesthetics of the Formentor, which is somewhat subjective and in fact the market indicates that this is the case, this variant has advantages. It is still fast, a lot and with a very sporty feel. Those who move by city will also have all the benefits that the Zero label implies.

And, as a good plug-in hybrid, on routes of less than 50 km, you will always move on electric, something besides being pleasant is very economical as long as you charge it at home. Recharging the battery completely costs between 50 cents and 1.50 euros, depending on your rate, with which the cost of those kilometers is very low. You will spend a little more on trips, but if you do a few a year, the Cupra Formentor eHybrid can be very interesting. 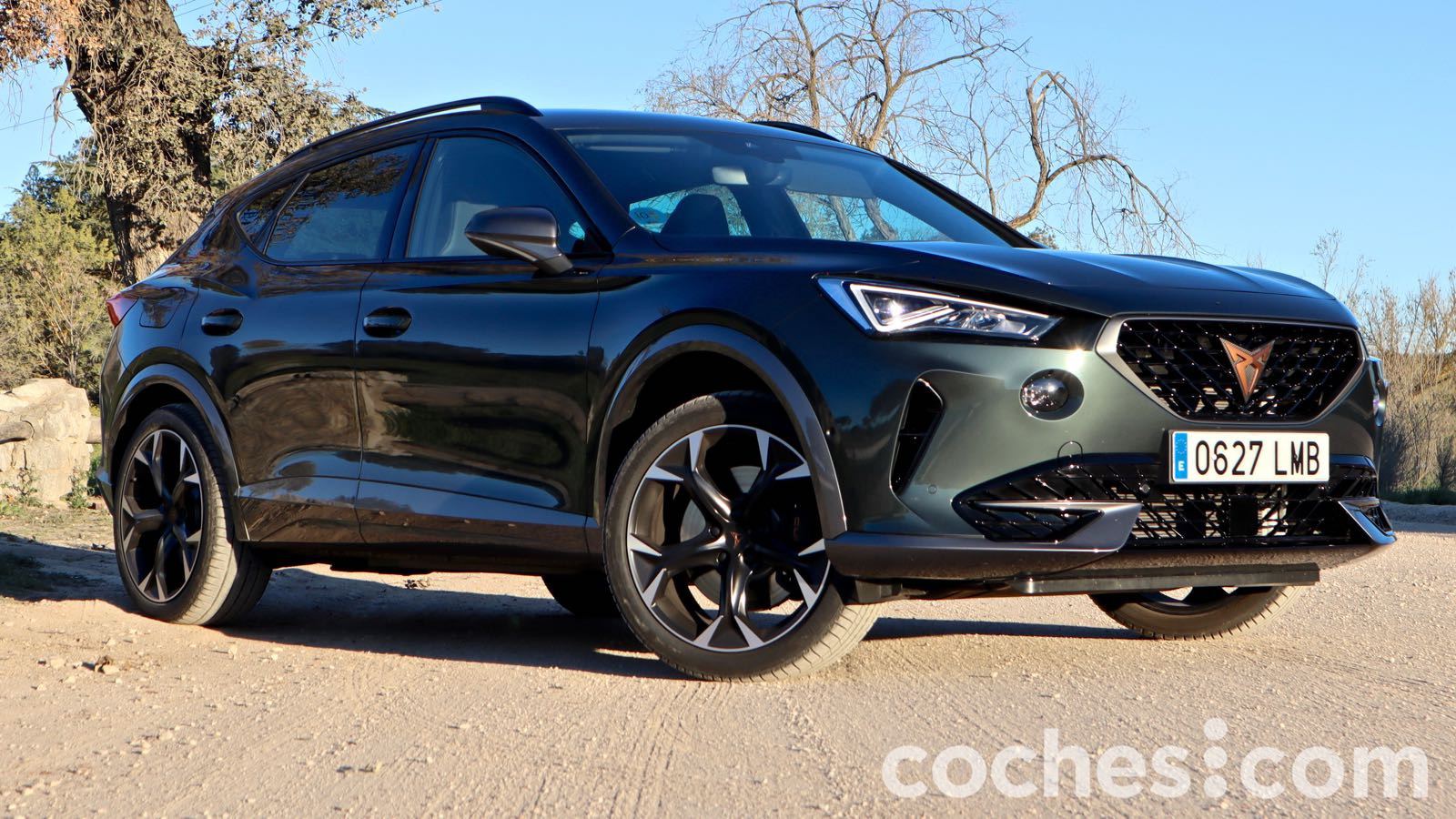