Home>Entertainment>Movies>Criticism of The Fantastic Four nº 27. The Eternal Portal is open

The new story arc of the Fantastic Four collection picks up speed as the new pieces in play, and the not so new ones, are placed on the board. Panini Comics drops us off at the bus stop so we can accompany the First Marvel Family on this journey.

A door that allows you to travel anywhere at any moment of time. We are aware of the enormous possibilities of something like this but also of the great number of problems and dangers that could cross that portal in the opposite direction. Scientific minds see the practical applications and the breakthroughs that could be made. The most cautious show concern for the unknown, for the risk that is run by keeping open the option of malicious exploitation.

And if something bad is about to happen, if that is part of the Fantastic Four’s past … it will end up splashing everything around them. But first, it can always come in handy to recover good things for them, such as the members of the Future Foundation. Although that means dragging back to Earth a certain skrull who now travels with them (from the Future Foundation volume, Problems in the Multiverse) and who in the past had its pluses and minuses with Johnny Storm, The Human Torch.

This episode of Fantastic Four in particular serves to reposition some of the concepts that we had assumed in recent times in relation to the youngest of the Richards, Franklin’s mutant status or Valeria’s romantic interest in Arboro. All this seeking to give an entity to their participation as team members, opening new avenues for their personal development. They have always been protected by their parents and the rest of the 4F but they have been crying out for some time for their share of responsibility and leadership.

Dan Slott seems to have wanted to take a leap towards greatness by taking advantage of the change of cartoonist in the collection.

If the history of The 4F is full of travel and events on a cosmic level, now what is beyond the limits of our Solar System seems to have reached Earth. Slott regains control of the plots that had been segregated from the family, first it was the Baxter Building (now a lot where the Eternal Portal is) and now the members of his foundation who were lost in space. No one doubts that the Baxter will rise again from its foundations to host a lot of life again.

The Art of Fantastic Four 27

All this approach takes on importance given the spectacularity that RB Silva gives to his pencils and inks, without detracting from the brilliant colors provided by Jesús Aburtov, one of today’s most prominent colorists along with the many times omnipresent Matthew Wilson or Marte Gracia. The graphic set shines with its own light, in a succession of small vignettes given how much there is to tell in such a short space. Not every day a cartoonist has the opportunity to capture so many different characters in a single comic and all of them from the Fantastic Four environment, most of them very secondary even.

Something is changing in this collection and it seems that for the better. At the moment greatness and mystery are taking over these pages, leading to a conflict that will have as its protagonist a villain from the time when the 4F were lost in the universe, trying to recreate worlds thanks to the powers of Franklin Richards, those who have now gradually disappeared until completely extinguished. 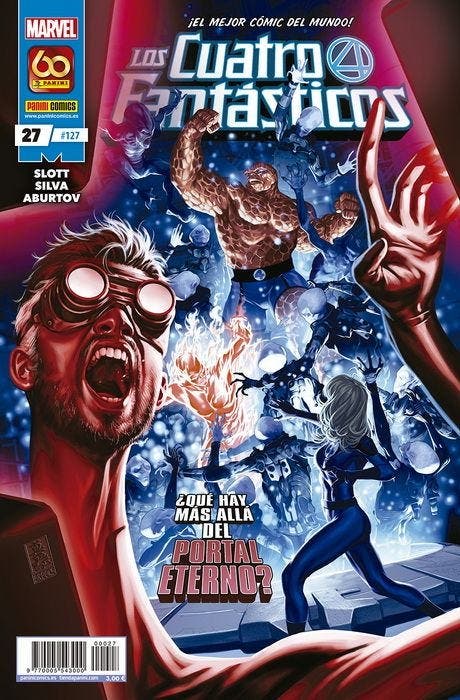 Description : A powerful portal that can lead anywhere has just opened. Series of countless realities are coming, to threaten Manhattan … and then the rest of the world! The Fantastic Four have to close it, but Mister Fantastic doesn’t want to.