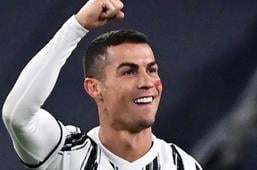 Cristiano Ronaldo continued his scoring streak by scoring a double in the game that Juventus beat Cagliari 2-0 on Saturday to advance to second place in Italian Serie A.

The Portuguese star has now scored eight goals in his last five games.
“When you have a champion like Ronaldo, you can achieve any result. He is an example for everyone and he just has to continue like this ”, highlighted the Juventine coach Andrea Pirlo.
La Vecchia Signora placed a point below Milan, which marches as the leader and visits Napoli this Sunday. Sassuolo, who is third, is one point behind, facing his match against Hellas Verona.
“It was very important for our growth to have a game like this,” Pirlo said. “We played well from the first minute and we dominated the game.”
Atalanta and Lazio are among four clubs with 14 points, three less than Milan. Lazio won 2-0 in their visit to Crotone, earlier Saturday, and Atalanta resigned themselves to equality 0-0 in their visit to Spezia.
Juventus attacked from the start. Federico Bernardeschi considered that he had given his team the early advantage, but his goal was canceled by an offside by Álvaro Morata.
Finally, the locals reflected on the scoreboard the pressure they had exerted, seven minutes before the break, when Morata found Cristiano. The Portuguese star made a dible from the left and unloaded a shot at the corner.
Cristiano increased his bill four minutes later. He took advantage of a corner, which Merih Demiral combed in his direction.
Juventus had opportunities to extend the lead in the complement, particularly when Demiral made a header that slammed off the crossbar.

IMMOBILE IS BACK
Ciro Immobile celebrated his recovery from the coronavirus with a goal and Lazio beat bottom crotone.
Argentine Joaquín Correa scored the second for Lazio, who climbed to fifth place in the table.
The game was about to be postponed due to torrential downpours and flooding in the area. But he proceeded, despite the fact that the ball was barely rolling on a flooded court.