The laboratory-grown or plant-based meat It is already a reality in society and it has more and more followers. But things are not going to stop with beef, now a company called Finless Foods is going for the tuna. They have created a plant-based tuna meat that they say mimics the experience of eating raw tuna 100%.

Eating vegan tuna sushis, for those with a shellfish allergy or without contributing to overfishing, is going to be a reality. Finless Foods indicated that will launch the new product to the market in chain restaurants and supermarkets over the next year.

The product is made with a total of nine whole plant ingredients. They have not wanted to say what they are, but they assure that the chefs and experts who have tried it have not stopped praising it.

In principle this tuna meat can be used and eaten in the same way as real tuna. That is, it can be eaten raw or cooked depending on whether we want it to make sushi or a hot dish. Likewise, it has a great advantage over the real one: the absence of mercury, which can often be a problem in real tuna meat. 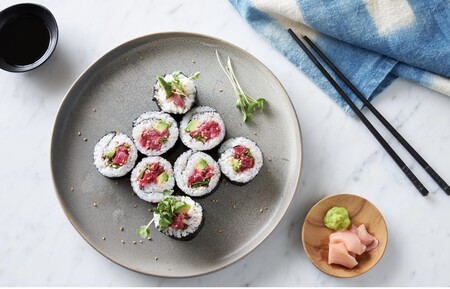 Although this fake tuna seems to be all advantages, we will have to see what it is like when it goes on sale. Not only in taste and texture, but also in price or consumption of resources necessary to manufacture it. In any case, it is posed as an interesting alternative for vegans or for people who are allergic to shellfish.

After the beef We have seen how researchers have gone for eggs or milk, even for coffee, it is a product that is being replicated in the laboratory

We have also seen substitutes for pets, although in this case they are usually based on insects. An easy way to get protein for animals, which does not necessarily put problems with where what they are eating comes from.