The European Union expresses concern about the impact of the pandemic on residences. In the middle of the second wave, a report from European Center for Disease Prevention and Control (ECDC), the European body of reference in the health crisis, highlights the “excess mortality” in some countries, such as Spain, and calls on the Member States for urgent measures to contain the spread of the virus in these centers.

In March, the second vice president of the Government, Pablo Iglesias, took command of social services during the pandemic. However, his management has been questioned. In the midst of the crisis, the leader of Podemos rejected his responsibilities, highlighting that the competence corresponds to the autonomous communities.

The ECDC document, published this Thursday, highlights that “observed mortality from all causes among the elderly underlines the severe impact of Covid-19 in this population ”.

“The residents of these centers are one of the most vulnerable populations and special attention must be paid to preventing the introduction of SARS-CoV-2 and controlling outbreaks,” he continues. The document warns that given the situation of greater vulnerability and underlying health problems, outbreaks in residences “can have devastating effects.”

The agency recalls that, once the virus enters these facilities, the probability of transmission “is high” and highlights its serious concern in all countries, warning of the increased pressure on health services and intensive care. “The overall impact of the infection for residents is considered very high,” the report notes.

The ECDC mentions Spain when referring that, in the first wave, there was a “Substantial excess mortality.” In the second wave, our country is also designated by the community body, along with Belgium, France, Italy, the Netherlands, Switzerland and Slovenia. An excess that is attributed mainly to people aged 65 or over, “with the highest excess observed in people aged 75 to 84 and 85 years and over.”

Faced with the inaction on the part of the Government, which during the summer months denied the evidence of the second wave, the agency highlights that the number of cases began to increase in the EU in July and that “all countries have already reached a higher (of contagions) than those observed during the first wave ».

The document also echoes a data that has not been officially communicated by the health authorities, although it has been communicated by some communities, according to which, up to 6% of the elderly residents in Spain they have died from Covid.

The EU points to possible causes of this enormous impact, such as the staff of the nursing homes working infected without knowing it, the lack of early warnings to identify the virus in the residents or the lack of information to the workers and managers of the centers. It should be remembered that from the sector they insistently demanded the Government to provide them with sufficient material, protocols and massive PCR tests. 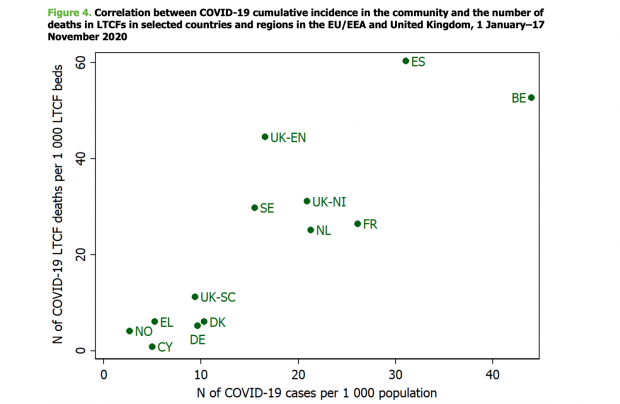 Comparison of deaths in residences until November 17. Source: ECDC.

Among the measures to be applied, the European report supports antigen tests, which have been carried out in the Community of Madrid for months, despite the initial rejection of the Government.

Thus, it is emphasized that the speed that these tests offer in the results provide an «added value» for the tracking of cases and the triage of infected.

In this way, the organization is committed to its use in residences as an effective instrument for the early identification of infected individuals who may transmit the disease, for a faster tracing of contacts and for the detection of infected workers.