Rayo Vallecano has answered his players this Wednesday with a statement that he had announced for last Sunday. The franjirrojo club has issued 72 hours later than expected, once his commitments in the League and the Cup have concluded, to give his version of the postponement of the match against Elche: “We began to remove the snow from the stadium on Tuesday and after the detection of ice sheets All the resources were used to liberate the Sports City. They weren’t enough to play there”.

As well addressed the circumstances in which the failed trip to Miranda took place and the accusations of the players for breaching the anti-covid protocol: “After talking with the head of LaLiga’s COVID protocol, it was decided to travel. It is done in two coaches. When starting it, nobody was aware of the amount of snow that was going to fall. The president gave the order to return and asked for the postponement. The club indicated to the squad that those who could not return home in their car should do so by subway, keeping their distances, or stay with a teammate who resided nearby. We apologize for not offering a better solution. “

Furthermore, the rayista entity He specified the issue of defaults: “The delay in the payment of a monthly payment never exceeded one week and it was a consequence of the COVID cases in the administration department ”. And added that “It will strengthen the lines of communication to solve problems.”

Once the important match played by our first team yesterday in Miranda de Ebro has ended, Rayo Vallecano wants to communicate the following:

1- After the exceptional meteorological circumstances that occurred in Madrid from January 8, Rayo Vallecano found on Sunday, January 10, a layer of 50 cm of snow on the grass of its stadium and the fields of its sports city. From that moment, Rayo Vallecano requested advice both to the company that maintains its turf Eurogreen and to the parent company of the latter that leads the technical direction, Royalverd, as well as to the LaLiga turf department. None of the sources consulted found a viable solution to clean natural grass pitches within 24 hours.

Given this situation and the impossibility of introducing heavy machinery without damaging the lawn, Rayo Vallecano looked for technical solutions that consisted of removing snow with light machinery used on the ski slopes. After taking new steps, Rayo Vallecano obtained the only two industrial snowplows available in Spain in the province of Valencia and with them began to clear the snow from the stadium the same Tuesday morning. On Wednesday, January 13, 90% of the snow was removed. On Thursday, January 14, in the morning after removing the snow, Ice plates were detected that made it impossible to remove them without damaging the pitch.

After the detection of this ice sheet that made it impossible to have the field on Saturday, they were allocated all the resources to free the natural field of the sports city from snow on the same Thursday afternoon, since in the field of the sports city the maintenance company did not place a protective tarp, which facilitated the snow removal work. At the same time, efforts are being made to obtain alternative fields. These steps were not carried out before due to the conviction that the Cup match was going to be played at our Vallecas Stadium.

Since Friday, January 15, Rayo Vallecano was in direct contact with the RFEF transferring the situation of the work to him at all times and explaining the effort that Rayo Vallecano was making in order to free the natural grass field of the sports city against the clock since at that time there were no alternative fields in the Community of Madrid for the dispute of the match. All this in order to be able to play a Cup match that, had it not been played, would have been a major disruption to the competition due to the tight schedule.

While On Saturday, January 16, the snow was removed from the field of play, an ice sheet located in one of the areas, at the discretion of the referee, made the dispute of the match impossible. All this great effort, deployment of resources and mechanical means to remove the snow without damaging the field, although they were not enough for the dispute in our facilities for the Cup match against Elche, they were so that from that same Saturday the players not called up for that game and the rest of the squad could train normally ahead of the league match played yesterday afternoon against Mirandés.

Rayo Vallecano wants to thank all its staff for the great effort made last week in the snow removal work, as well as the interest and dedication shown at all times by the RFEF staff to ensure that this match could be played in very adverse conditions.

2- Regarding the comments made regarding the failed trip to Miranda on January 8, Rayo Vallecano wants to affirm that complied, as it has been doing since the pandemic emerged, with all the protocol measures of COVID 19. Upon detection of three positives In the PCR control that was carried out on January 7 in the morning to the entire staff, Rayo Vallecano isolates those positives and quarantines all close contacts of said positives, thus respecting the LaLiga COVID 19 protocol.

The next day a second test was performed all the players, and they were kept isolated at home by order of the Club’s medical services until the results were obtained, results that were known after 4:00 p.m. on Friday.

After speaking one of our doctors with LaLiga’s COVID protocol manager decides that the team is suitable for travel and the League itself informs us that according to the Unified Protocol for training and competition for the 20/21 season, all those members of the expedition with two negative PCRs and who have not been identified as close contacts of the people positive from the results of January 7 and 8, they had to start the trip to Miranda de Ebro according to the established travel plan.

The journey begins in two coaches According to the LaLiga COVID protocol regarding travel. However at the time of starting it, no one was fully aware of the large amount of snow that was going to fall moments later, which made it impossible for the two buses and the President’s car to travel to Miranda de Ebro. Therefore, After starting the trip and verifying the danger of it, the President of the Club ordered the two coaches to return to the sports city and asked the League to postpone the match due to force majeure.

After being able to return to the Sports City Rayo Vallecano gave the indication that all members of the staff who could not travel to their home in their private vehicle should travel by metro keeping safe distances or staying at the homes of colleagues whose home was closer to the Ciudad Deportiva.

From Rayo Vallecano We want to apologize to all members of the expedition for not being able to offer a better solution upon arrival at the sports center, but we ask that you understand the force majeure situation in which the Community of Madrid was at that time, with a total blockage of communications and thousands of cars without the possibility of being rescued immediately.

3- Rayo Vallecano wants to clarify that the delay produced in the payment of any monthly payment in the payroll since this terrible pandemic emerged has never exceeded more than a week and it has been due to the many COVID cases that we have suffered in the Club and therefore in the administration department of the same, situations that have led to the isolation of each positive case and the quarantine of all their close contacts. These events have led to delays in the multiple administrative tasks, a situation that has been normalized due to the large number of Club workers who have acquired antibodies during this process. Despite Rayo Vallecano, despite this greater cause, wants to apologize if this fact has caused someone any harm.

4- Rayo Vallecano, responding to the requests of its first team, indicates that will reinforce all lines of internal communication in order to provide prompt solutions to any problem that may arise on a day-to-day basis.

We do not want to end this statement without first to thank once again the effort that all the members of our entity are making to maintain our activity and compete safely in this very uncomfortable new normal in which we are living, and in turn we pray that we all continue to maintain the sacrifices that comply with all current protocols since it is the only way to defeat this terrible pandemic. 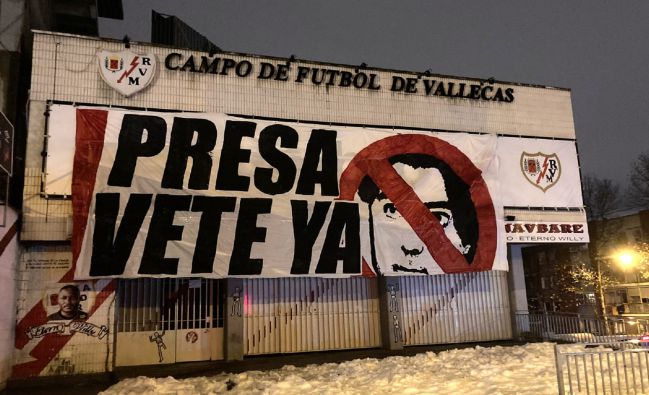 A huge banner against the president in the Stadium

This wednesday night A huge banner appeared in the Vallecas Stadium with the face of the president of Rayo, immersed in a forbidden sign, and the phrase: “Dam, go now”. It was located between the entrances to Gates 1 and 3. The Franco-red fans wanted to demonstrate their disagreement with the management of Raúl Martín Presa. It should be remembered that already in the match against Elche, in the Copa, several Rayista supporters shouted “Dam, go now” from the outskirts of the City of Soccer of Las Rozas.