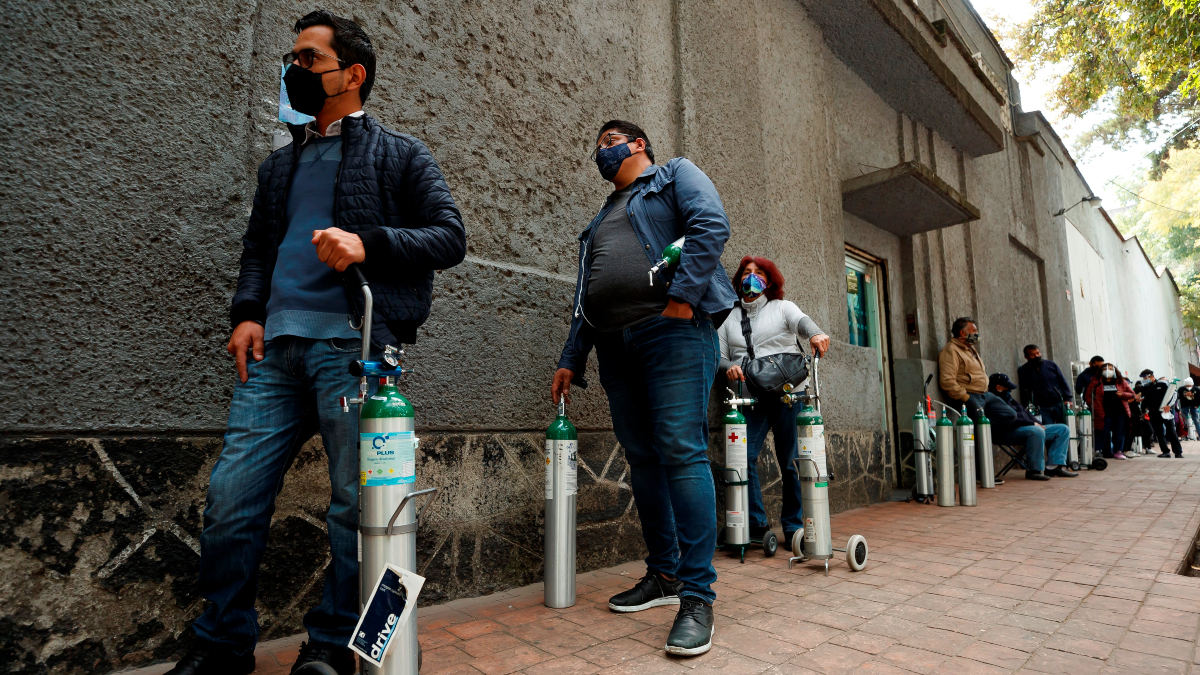 MEXICO – Mexico City faces the crudest moment of the COVID-19 pandemic almost a year after its onset with saturated hospitals, long lines to stock up on oxygen, a collapsed public transport system and hospitality on the edge of the bankruptcy.

“Yes, we are over 89% of hospital occupancy,” the mayor of the capital, Claudia Sheinbaum, confirmed this Wednesday. However, federal government figures place it at 92%, despite the fact that government calculations contemplated having dominated the new peak of the pandemic by now.

To achieve this, Mexico City has kept its non-essential activities closed since December 19, a measure that does not seem to have had a positive impact on the number of infections, deaths and hospitalizations.

“There are many alerts. Every day there are like four or five in the time that I am here, that I am not all day, of people killed by covid,” Patricia explained from the Balbuena Hospital, where her husband remains hospitalized for another pathology.

Patricia waits for several hours every day outside that hospital in the eastern capital, along with dozens of relatives of patients with covid who finally find a bed after walking “through different hospitals.”

“There are more people. More arrive. There are many who leave because their relatives die, but more continue to arrive,” observed the woman.

The program is promoted by Xochimilco, one of the municipalities of Mexico City.

The most recent data from Mexico City reveal that there are 4,993 people hospitalized in the capital and another 1,648 occupied beds with ventilators, unparalleled numbers since the start of the pandemic in late February 2020 in a capital that has increased its hospital capacity in 38% in the last month.

The Mexican capital registers about 20% of all deaths in the country, with 23,835 deaths, in addition to touching 375,000 infections.

Mexico is the fourth country in the world with the most deaths from the new coronavirus – it has 135,682 victims – and accumulates more than 1.55 million infected, with a new record on the eve of 1,314 deaths, in addition to 14,395 infected in 24 hours.

SCARCE OXYGEN
If the situation in hospitals is bleak, patients facing COVID-19 at home do not see a better horizon due to the shortage of medical oxygen that plagues the city, with long lines at refill points despite efforts by authorities for expanding coverage.

Alfonso Rodríguez, a middle-aged man with three covid patients at home, recharges oxygen “about eight times a day” to refill the five tanks at his disposal, while he waits in line for an average of “two and a half hours” .

“Right now I come from another place and they told me that until five in the afternoon (there was no oxygen), and it was eleven o’clock in the day. (…) It’s too long,” he said while waiting at a recharging point in the area del Escandón, in the heart of the capital.

Dr. Felipe Bolívar clarifies some myths about the COVID-19 vaccine that grow around it.

Among other sick people in his home is his 84-year-old mother, in addition to having a relative “who is hospitalized.”

“It took us four hours for them to give us a bed. In fact, yesterday we spoke with an ambulance and a paramedic told us that there is a wait of up to six or five hours and that they are dosing oxygen too,” he said.

A little further down the line, Emilio was celebrating finally being able to get a new tank, as his, from 2015, was out of date.

Inside his house there are two people with covid, both in the second week of illness and in a “delicate” state, since they have “70 of oxygenation and from less than 90 it is already an alarming fact.”

“Yesterday I went to five branches (of oxygen) and in three I found myself with a shortage of oxygen. There were no longer any. And in two there were lines of four hours,” he said.

RESTAURANTS ON THE LIMIT
The measures to contain the virus, whose effect has not yet been noticed in hospitals and infections, have against the ropes non-essential economic activities, which accumulate more than two weeks in a second closure, and in particular restaurants.

The CDC is requiring that every passenger who wants to enter the United States must show their negative COVID-19 test.

Since last Saturday the extension of non-essential activities was known, which still do not have an opening date, restaurants in Mexico City have been on the warpath with daily protests based on cacerolazos.

This Wednesday afternoon, García confirmed, a new meeting with the capital authorities is scheduled in which the hoteliers will state “that the situation for restaurants is already unsustainable today.”

“We have already let go of people who worked with us for years, like 400,000 people. I think that every week that passes thousands of people are added, because you cannot pay their payroll,” he insisted.

The government of Mexico City promised to negotiate with restaurants and other sectors, conflicts that add to the health emergency and problems in the main transport network, the metro, which due to a fire has 25% service stopped until further notice.