The newspaper of Antonio Maestre, La Marea, an “expert” was invented to ensure that the mass demonstrations of 8M had not had any impact on the spread of the coronavirus pandemic in Spain.

The report published by La Marea was so inconsistent, and its arguments so ridiculous, that no one wanted to place their signature on it. As the report had to be covered with a certain scientific rigor, Antonio Maestre’s website attributed it to a fictitious “expert”, Miguel Lacambra, who for several days interacted with users of social networks using a false Twitter profile with a photograph computer generated.

Antonio Maestre, who has been one of the “Verifiers” of the Maldita web who is dedicated to reporting false news, was the one who most actively spread the fake article on the coronavirus on social networks signed by the non-existent “expert” Miguel Lacambra. The main leaders of Podemos also became the most active defenders of the “expert” invented by Antonio Maestre’s team in La Marea.

«Miguel Lacambra is TT. He has written this article explaining with data that are public and with arguments that are very difficult to refute that the demonstrations and political rallies of 8M have not had any measurable impact on the spread of the coronavirus, “wrote Podemos spokesman Pablo Echenique.

Miguel Lacambra is TT. He has written this article explaining with data that is public and with arguments that are very difficult to refute that the demonstrations and political rallies of 8M have not had any measurable impact on the expansion of the coronavirus. https://t.co/d2pKWIy1yE

In addition to publishing his article with false conclusions in La Marea, the invented “expert” Miguel Lacambra maintained an intense dialogue with Antonio Maestre on social networks, always with the same objective: spread false and manipulated data about the pandemic of coronavirus to confuse public opinion. Although it is enough to observe the following graph published by Maestre to verify that, indeed, the infections soared exponentially since 8M.

On the contrary, it is good news, because the growth rate is decreasing (new cases divided by total cases from the previous day). We are at approximately 18%, which is lower than several days ago (it has been going down for a few days).

It didn’t take long for users of social networks to discover that Miguel Lacambra does not exist, after verifying that the photo he used on his Twitter and LinkedIn profile was also false.

Leaders of Podemos and television characters such as Quique Peinado had been in charge of promoting the account of the non-existent Miguel Lacambra on Twitter, which had more than 15,000 followers. In his Linkedin profile, Lacambra claimed to be a former journalist from RNE and the . agency who had become unemployed.

When the scandal broke out, Antonio Maestre’s website was forced to publish a lengthy clarification in which it assured that Miguel Lacambra is a “heteronym” used for “preserve identity and privacy»Of the actual author of the article.

La Marea statement:
Clarification before the commotion caused in RRSS by the identity of the author of the article ‘Has the 8-M influenced the increase in cases of Covid-19?’ pic.twitter.com/NMhcNBpTbI

But Antonio Maestre himself reacted in a much more furious way when the deception was discovered: «You are rabble. Motherfuckers of the worst condition. Not everyone can show their faces like others do without being hurt at work. The campaign to harass an anonymous guy who has published an analysis on 8M shows the kind of bastards that are around here, “he wrote in a Twitter message that he deleted shortly after.

And then he threatened to bring legal action against anyone who identifies him with the ghostly “Miguel Lacambra.” Pablo Echenique also tried to justify the deception with the following message: «The far-right accounts are angry because they cannot refute the argument of the article and that makes it difficult for them to continue attacking women. Oh my God! Miguel Lacambra is a pseudonym! »

Thanks to the extreme right-wing tweeters for having made Miguel Lacambra TT. That has allowed me to discover your excellent article in which you demonstrate with data that 8M and Vistalegre have not had any measurable impact on the expansion of the coronavirus. https://t.co/d2pKWIy1yE

On March 28, the newspaper El País finally published an article in which a 29-year-old Asturian engineer, Diego Álvarez Miguel, claimed to be Miguel Lacambra: “I put a face made with artificial intelligence because it seemed funny to me, for someone who is nobody like me, who did not pretend to be nobody “.

According to his testimony, it was Antonio Maestre himself who invited him to write the article that, using supposed scientific data, intended to show that the 8M demonstrations had not contributed to the spread of the coronavirus pandemic in Spain.

The false expert ignored in his report data as relevant as that almost all the ministers who led the 8M Madrid demonstration (except Isabel Celaá who, very far-sighted, protected herself with nitrile gloves), fell ill with coronavirus a few days later: the vice president Carmen Calvo, the Minister of Equality Irene Montero and that of Territorial Policy and Public Function, Carolina Darias. Also the president’s wife and mother Pedro Sanchez, Begoña Gomez Y Magdalena Pérez-Castejón.

Antonio Maestre has spread numerous hoaxes about the coronavirus on social networks, such as the following message: «It is more likely die run over because the mask to protect yourself from the coronavirus move and cover your eyes than by the virus itself. 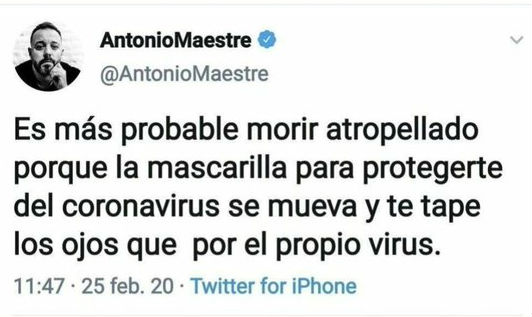 Now, the Government formed by PSOE and Podemos has created a Committee against Disinformation in La Moncloa because, according to it, one of its priorities is to fight against false news.