Health has released the balance of affected by coronavirus of this Thursday, which reports 201 deaths reported since Wednesday, the last official report. Regarding infections, the number of cases in 24 hours is 16,676. The global increases by 35,878 for a total of 2,211,967 infections since the start of the pandemic.

As for vaccines, Health has reported that, to date, 676,186 doses have been administered, 94,548 more than those reported on Wednesday. 99 of the new vaccines administered are from the Moderna company, the first to be put in Spain. The total of distributed doses, once collected those that were sent to the CCAA on Monday, are 1,139,400, of which 59.3% have been administered. The Valencian Community and Asturias are the two Autonomous Communities that have administered the most doses, in percentage terms, with 85.2% and 79.4%, respectively. Euskadi, with 41.2% of the doses administered, follows the tail in the percentage ranking.

In the last 7 days, according to the report, there have been 774 deaths from COVID-19. Most of the deaths in this period (218) correspond to the Valencian Community. Regarding admissions to the ICU with a date of admission in the last 7 days, 330 patients are in the Intensive Care Unit, which is 20 more than on Wednesday.

Simon: “Confinement does not seem necessary”

As Fernando Simón, director of the CCAES, declared this Thursday, “confinement does not seem necessary”: “The possibility is always on the table, but now with what we have I think is enough”, he added.

Simón acknowledges that “we continue to increase the number of cases”, and that in the coming days, until the beginning of next week, “an increase in the Accumulated Incidence at 14 days” will still be observed, which currently stands at 522 cases per 100,000 inhabitants.

Thus, the director of the CCAES has advocated waiting to verify the effectiveness of the measures adopted by the different autonomous communities since the beginning of January: “If they are effective, it is very likely that during the next week we will see a stabilization of the cases or even a decrease. But if they are not effective, we can expect an increase in cases, and that can put ICUs in a critical situation. Let’s hope that the measures are effective ”, he declared. This increase, faster in the last week, would be associated, according to the director of CCAES, to the Christmas period: “At Christmas maybe we had a better time than we should have. We could already propose whatever it was that we knew this was going to happen ”, he pointed out. 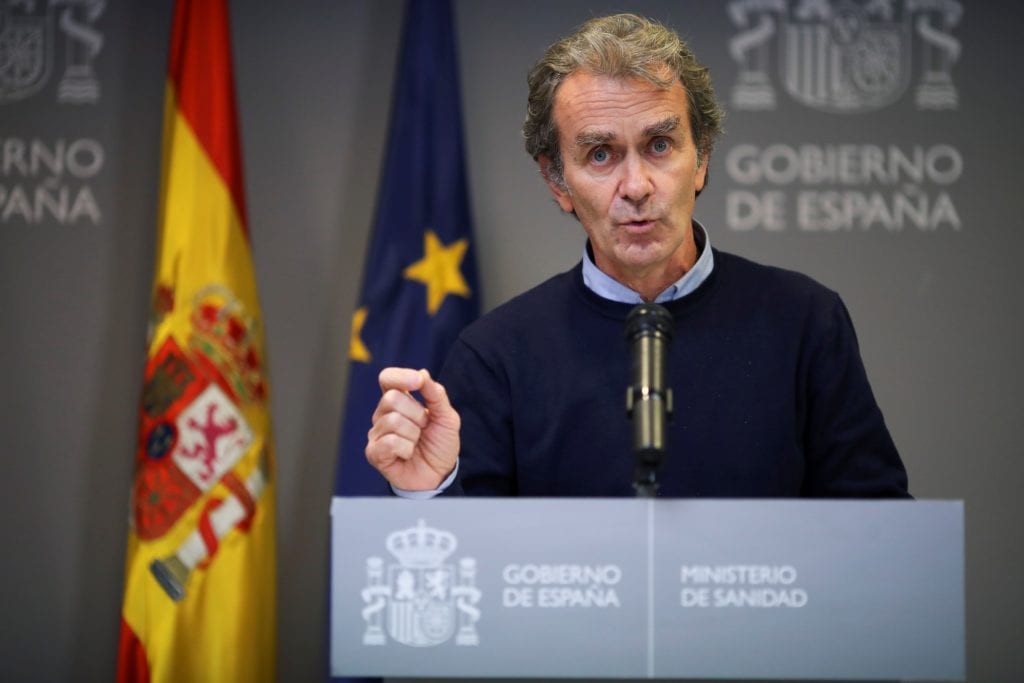 In relation to this increase in the cases of COVID-19 diagnosed and asked about the suitability of holding the Catalan elections in the middle of the third wave, Fernando Simón considers that his opinion on the matter is “not relevant”, since his unit, has asserted, analyze massive events in general. “We have to adapt to the transmission level of each moment. The elections are in a month, there is still room to assess the situation in Catalonia ”, he added.

The British strain does not seem to have, for the moment, a great effect on the increase in coronavirus cases in Spain, since, according to Simón, “the increase is not attributable to the British strain, at least in its entirety.” “You have to see how the strain evolves in our country, but here it is not occupying the ecological niche as it does in England. It is still a small volume, which does not mean that it will nest in our country in the future ”, he stated.

“Spain is one of the countries that is better vaccinating”

“Spain has already administered 676,000 doses”, reported Simón, who assures that “the vast majority have been administered in residences, both to residents and workers”: “60% of the doses received have already been applied, knowing that we information remains on Friday, Saturday and Sunday until the next batch of doses is received [el lunes 18 de enero]”, has added. That is why for the director of the CCAES “Spain is one of the countries that is vaccinating the best”: “Without being the best, it is one of the countries that is doing very well and we are going to improve”.

Asked by people who have refused to be vaccinated, he has acknowledged that he does not know the exact number but that he knows that it is “minimal, almost testimonial”: “We have a country with a supportive population that understands the importance of getting vaccinated,” he said.

The cumulative incidence at 14 days exceeds 500

Madrid, the one with the most cases

In the contagion data for the last day, Madrid is the Autonomous Community with the most confirmed cases reported (4,633), followed by Catalonia (2,288) and Castilla y León (2,109). In the global calculation, 443,790 positives have already been registered in the Community of Madrid. Melilla and Ceuta are the areas in which there are fewer registered cases, 5,005 and 3,404, respectively.

Catalonia and the Valencian Community, CCAA with more patients admitted

Regarding the situation of assistance capacity and COVID-19 activity in each autonomous community, Catalonia has 4,183 COVID-19 patients admitted, occupying 16.62% of the beds. Of these, 579 are in intensive care (41.84% of occupied beds). Follow him the Valencian Community, which has 3,546 admitted patients, which represents an occupancy of 30.12%. In this region, there are 531 people in intensive care, which represents 47.54% of the places. The Valencian Community, Catalonia and La Rioja have an ICU occupancy equal to or greater than 40%.