Madrid hospitals unblock themselves from Covid after passing the gale of the third wave. The number of hospitalized patients suffering from the virus has dropped in just two weeks by 40%, going from 4,418 to 2,685 admitted. UCIs are also falling, but at a slower rate. The Madrid’s community It has already begun to apply less restrictive measures for the public and for the hospitality sector, such as delaying the curfew and closing hours of bars. The government of Isabel Diaz Ayuso He argues that the fall in infections and the improvement in hospitals allows it.

The Ayuso Executive has made the decision to make restrictive measures more flexible after verifying that the trend of infections and the incidence continue to decline, standing below the threshold of 500 cases per 100,000 inhabitants. That was the threshold imposed by the Ministry of Health last October to confine the community on the perimeter.

But what has definitely encouraged the regional Executive to make the decision have been the figures that hospital occupancy shows today, and which reflect that the situation in the Madrid hospital network is unloading at a forced marches.

On February 1, Madrid recorded 4,418 patients admitted by Covid, marking there the peak of occupation of the third wave. This Thursday, February 18, two weeks later, the figure has plummeted to 2,685. This decrease of 1,733 hospitalized in 18 days has meant a drop in the 40% in hospital occupation.

In the Intensive Care Units (UCI) the situation has also improved substantially, although in gross numbers it is still critical. This Thursday there were in Madrid hospitals a total of 655 admitted serious. A number greater than the maximum of the second wave, but 9% lower than the maximum that was marked in the second – the same February 1, as in the case of hospitalizations.

The decline in infections occurs at a key moment for the strategy to fight the coronavirus. The vaccination campaign, essential in order to recover normality in the coming months, is advancing in Madrid at the national average rate: the 73% of vaccines delivered They have already been set (the Spanish average is 74%). A total of 354,258 doses have been administered, and there are already 160,202 ‘complete regimens’, that is, immunized after receiving the two pricks. 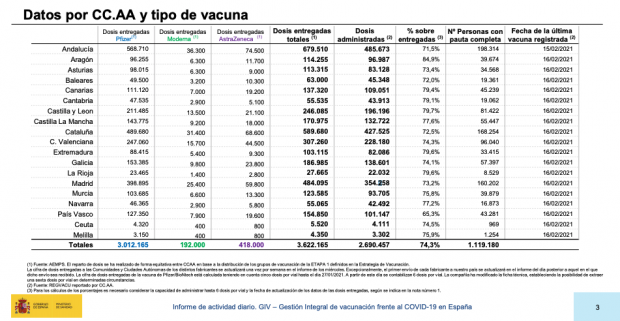 The Community of Madrid has begun to relax the restrictive measures it applied during the third wave to reduce the incidence of the coronavirus. From this Thursday, Madrid applies the curfew from eleven at night, and not at ten as it has been doing until now. In addition, the closing time of the hospitality he is two hours late, from nine to eleven. The closing of bars will coincide with the curfew time, but the establishments will not be able to welcome new customers from ten o’clock at night nor will they serve new drinks to those who are already there.

The regional government seeks to reactivate the economy immediately, as the main associations of merchants and hoteliers have demanded.

«Madrid still stands. Missing many of our fellow citizens and loved ones, many convalescent people, but with the desire to remain standing. And, above all, with more desire than ever to leave this terrible pandemic behind, to live, to progress, “said the Madrid president at the event this week at the Royal Post Office when announcing a reactivation plan with 22,000 million euros contributed by the European Union.

The regional government plan consists of more than 200 projects and a total of 28 structural reforms aimed at promoting recovery from the coronavirus crisis. Among these projects, the regional Executive will allocate 28.8 million for the creation of 23 environmental corridors.

The highest percentage of investments, 41.4%, have been planned to be allocated to matter of social and territorial cohesion, while 31.6% are directed to ecological transition policies and 27% to digital transformation projects, in line with the objectives set by the EU.