David Ruiz Atiega (Logroño, 1985) is a Spaniard who ventured in 2018 to try his luck in Chinese football. After having been a goalkeeper in lower categories of teams such as Zaragoza, Alavés or Logroñés, among others, he received an offer from a Chinese club to take over the coordination of the goalkeeping area.

Just a month before the pandemic broke out in China, he reached an agreement with the Ever Bright FC (2nd Division), which belongs to the city of Shijiazhuang (Hebei). For family reasons, he had to return to Spain and could not return until a few days ago to the country where the coronavirus originated. Now, from China, he attends As to publicize the current Chinese situation.

First of all, how is football there and if it is managing to grow to get as close as possible to Europe?

Soccer in China is evolving and developing by leaps and bounds. The Chinese Government has promoted and promoted soccer as a sport and having the facilities for its practice. The quality of players and goalkeepers, in individual technique, is extraordinary. They also work very hard so that everyone has the conditions for sports practice, where China, both in grassroots and professional football, is improving in collective tactics, they are understanding the game and the different modifications that can be generated in a match.

In addition, provincial competitions are being held, which I consider the most important, and thus be able to compete and not train only. In this sense, it still has to improve to match Europe, but I am clear that, with the effort, sacrifice and daily work that is being done in the future, it will be able to resemble Europe in a large percentage.

I understand that you arrived in 2018, how was the outbreak of the pandemic experienced there and how did it affect football and you, in particular?

The pandemic caught me in Spain, because a few days before the Spring Festival I had to return for family reasons. It affected a lot, because as in Spain, they had a strict confinement for almost three months and it was closed internally and externally. As the situation improved, they have been gradually opening up to foreigners and nationals with strict measures so that the virus does not return.

A few days ago I was able to return to China after almost 10 months in Spain, and after two tests in Spain (serological and PCR), when I arrived in China after extreme security measures during the flight I had to perform two more tests (nasal PCR and mouth). They place us in hotels to do the mandatory 14-day quarantine, in which, we could not leave the room, only to go out for meals that were left in a chair at the door, we had to drink twice a day the temperature, and a day before the end of the quarantine they did another two tests (serological and mouth). Once we have the negatives of the respective tests, the government transfers us to the train stations or airport to reach our destination.

Once I arrive in Shijiazhuang, the provincial government quarantines me for seven more days, and once that quarantine is over, I can lead a normal life. Of course, the club is not allowed to enter the facilities until it has spent 28 days in China. 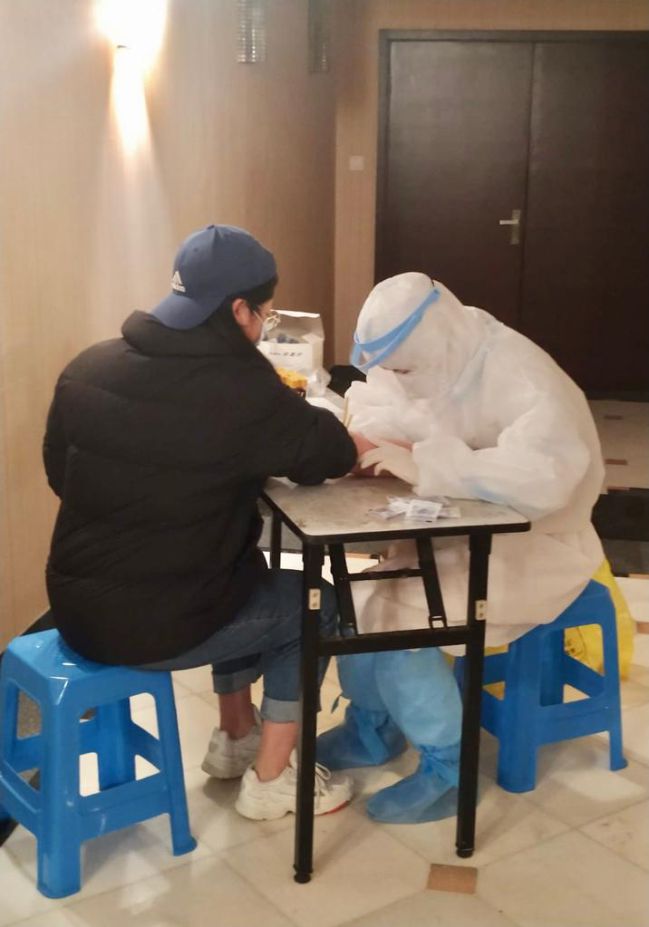 “The measures are very strict: you have to take a test and keep a 14-day quarantine”

Now you are in quarantine, after traveling to Spain in January, what has surprised you the most upon your arrival in China now?

What has surprised me the most are the security measures, although I already came with information from my club and friends who live here. Furthermore, once we are in the country, the government and health authorities have treated us in an exemplary manner.

How are the measures that exist right now in the country to combat the virus?

The most important measure is the knowledge that the population has had regarding the virus and the social duty to eradicate it. Currently the virus in all of China is eradicated, except for some isolated cases that arrive on flights. From what I know of news from here, the person who arrives infected or with antibodies goes directly to the hospital to have a follow-up. In addition, the government has measures in museums, hotels, train stations or airports, public spaces or sporting events in which the use of a mask is mandatory.

“Currently the virus in all of China is eradicated, except for some isolated cases that arrive on flights”

Is it true that you can go without a mask on the streets?

It is true, in the whole of China it is possible to be without the mask, because there is a social conscience with the mask, since it is used daily by the entire population for other purposes such as environmental pollution or to avoid spreading the flu or other diseases.

What do you think is the main reason why China has managed to control the virus long before Europe or America?

The main reason for eradicating the virus in China has been the total closure by land, sea and air. Until they have had it controlled, they have not allowed anyone to enter the country with the largest population in the world. In addition, the massive screening of the population through tests and quarantines.

How do you pass the quarantine and then what measures do you have to take?

I spend it studying Chinese, exercising, preparing methodological development for training, talking to my family … I have been trained from the quarantine of Spain, although at times it is overwhelming and stressful.

What does the club tell you and what does your family tell you?

From the Club they give us the necessary peace of mind so that when we can develop our work, it is done efficiently and in the best conditions.

My family at first in this experience had, like me, the doubts of being in a distant country, with another language that is a bit unknown, a different culture … But from the moment that we value undertaking this sporting experience They have been supporting me day and night and making my stay here very easy. In addition, I have been lucky that part of the family has been able to visit me.

When is there talk of absolute normality in China and what is said there about the arrival of the vaccine?

In this sense, there is no talk of absolute normality, because it already exists, although with small nuances. Here in China, so far, three vaccines are being developed. Through the children and adolescents I trained in Xi’an, I know they are being vaccinated. In my current club at the moment none of the goalkeepers are being vaccinated, but more will be known as the months go by, since the intention shown by the government is to vaccinate the entire population in the long term.