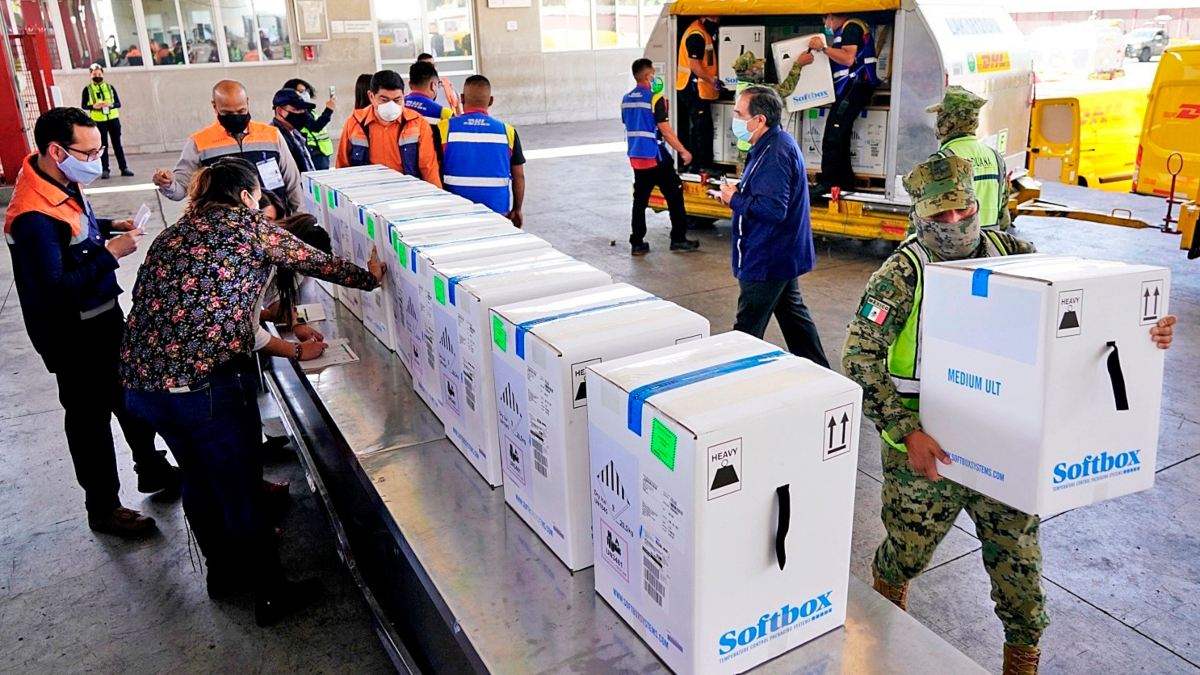 MEXICO – The country received 486,525 doses of Pfizer’s anticovid vaccine from Belgium on Tuesday after a month of delays, which will allow health personnel to resume vaccination that according to government plans should have concluded in January.

“Today 486,525 doses of the Pfizer vaccine arrived in Mexico. They will be used to continue vaccinating first-line health personnel from covid hospitals in the 32 states,” reported the Undersecretary of Health and strategist against the coronavirus, Hugo López- Gatell, on social media.

A first part of those vaccines landed in the northern city of Monterrey at 9.10 am while the rest arrived in Mexico City at around 1.15 pm after being delayed by snowfall in Cincinnati, Ohio, where they had to stop over.

Previously, at a press conference at the National Palace, the Mexican Foreign Minister, Marcelo Ebrard, explained that Pfizer had “a supply interruption of almost a month” because during that time “it closed its plant in Europe”, from where Mexico receives the vaccines , to expand its production capacity.

The new doses of Pfizer will serve to resume the immunization of health personnel, the first phase of the vaccination plan, while the 870,000 doses of AstraZeneca arrived at the weekend are being applied from Monday to adults over 60 years of age.

This Monday gyms, churches and open-air theaters will reopen.

Ebrard explained that in the coming weeks the country will receive a total of two million AstraZeneca vaccines from India and that this week 2 million doses of the Chinese CanSino that arrived in bulk will begin to be packaged in Mexico.

In total there are “232.33 million hired, prepaid and committed,” said the Secretary of Foreign Relations.

Likewise, Ebrard announced that, at the request of President Andrés Manuel López Obrador, Mexico will file a complaint with the UN Security Council on Wednesday for “inequity in access to vaccines.”

“The countries that produce vaccines have very high vaccination rates and Latin America and the Caribbean very lower rates. Tomorrow we are going to raise it in the Security Council because it is not fair,” he explained.

VACCINATION PROGRESS
Mexico began on Monday the second phase of the vaccination plan with the immunization of adults over 60 years of age with AstraZeneca vaccines.

Inhabitants of Chiapas prefer to take refuge in their beliefs to protect themselves from COVID-19.

On the first day of vaccinations, 87,472 doses were administered in 144 of the 333 municipalities planned, most of which were in rural or marginal areas.

Undersecretary López-Gatell explained this Tuesday in the same press conference that it was preferred to start in rural areas because the British vaccine “does not require freezing” and “it is easier to distribute it.”

In addition, he stressed that “in rural areas there is 50% more fatality (from COVID-19) than in metropolitan areas due to social inequality.”

According to their data, the lethality of the coronavirus in Mexico is 8% in urban areas and 12.4% in rural areas.

The arrival of Pfizer vaccines this Tuesday will serve to resume phase one of the vaccination plan, since so far 622,658 doses have been applied to health personnel, of which only 86,198 have received the two necessary doses, which represents 14% of the doctors and nurses in the country.

17,457 teachers from the southern state of Campeche, the only one with open schools, have also been vaccinated with the first dose of Pfizer.

The vaccines “are arriving at different rates and we have to adapt the situation of the program according to reality,” López-Gatell admitted.