According to a report from the capital’s Security Secretariat, La Unión Tepito dominates the Cuauhtémoc mayor’s office

After search nine addresses, capital authorities they arrested 15 people involved with drug dealing and alleged generators of violence, who were in possession of drugs, long guns and grenades.

The operation was deployed in five neighborhoods, one of the mayor’s office Cuauhtémoc and the rest of the Benito Juarez. Agents of the Prosecutor’s Office From Mexico City (FGJCDMX) and police officers from the Secretariat of Citizen Security (SSC), ventured into the Bravo de Tepito neighborhood since the afternoon and night of 27, as well as other demarcations during early morning on Saturday, November 28, where they were supported by members of the National Guard.

After arresting Lizeth Yuridia Juárez, La Chofis, operator of The Union Tepito; andcapital security elements were for more alleged involved with this criminal group that dominates the Cuauhtémoc mayoralty In such a way that they went to the homes of the same Jesús Carranza street, where the 40-year-old woman had been arrested in flagrante delicto, trading cocaine.

Among the 15 captured are three women and 12 men, to whom were they seized three grenades, six weapons, four long and two short, in addition to 73 useful ammunition of various calibers.

In one of the points of the Benito Juárez mayor’s office, even there was a shooting between criminals against policemen and a uniformed man was injured. 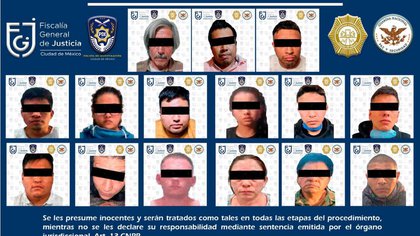 In the direction of this street marked with number 69, altars of satanic type, weapons and narcotics were found. Presumably, this neighborhood was mostly controlled by women, who sold drugs (Photo: CDMX / SSC Prosecutor’s Office)

According to the statement from the agencies, This operation derived from complaints about possible drug sales points, field work and intelligence. For this reason, search warrants were requested to intervene in the nine properties.

“After a Control Judge released the investigation techniques, during the afternoon and night of the 27th, as well as in the early morning of November 28, They were fulfilled during an operational deployment in the Morelos colonies, Cuauhtémoc mayor’s office, as well as Iztaccíhuatl, Portales Norte, Niños Héroes and San Simón Ticumac, Benito Juárez mayor’s office”, Detailed the joint report.

First, the troops went to Tepito, a neighborhood of the Morelos neighborhood. Made incursions into four homes on Jesús Carranza 69, Granada and Constancia streets. In these directions three men and two women were arrested. After checking the neighborhoods three spherical grenades, a long gun and 73 cartridges were found tools of various caliber.

At the same time, Two grammar scales, 83 doses and a package with alleged marijuana were seized, 143 wrappers and 60 grams of white powder with characteristics of cocaine, as well as 196 capsules of the same narcotic in stone and another packaging with methamphetamine. Among the 15 captured are three women and 11 men, who were seized three grenades, six weapons, four long and two short, in addition to 73 useful ammunition of various calibers (Photo: CDMX / SSC Prosecutor’s Office)

One of the properties of Jesús Carranza was not insured because no people were found inside or indications constituting a crime. However, in the direction of this street marked with number 69, altars of satanic type, weapons and narcotics were found. Allegedly, this neighborhood was mostly controlled by women, who sold drugs.

In that way Actions in the neighborhood dominated by La Unión Tepito concluded, a faction that has spread to other demarcations of the Cuauhtémoc mayor’s office and has unleashed a wave of violence in the streets of the Historic Center with dismemberment, kidnapping, extortion of merchants and the sale of narcotics.

But the authorities continued their search for suspected criminals in four neighborhoods of the Benito Juárez mayor’s office. Even Yair Ávila, brother of Víctor Hugo Ávila or Víctor Hugo Ramírez, was detained in the downtown area, The Huguito, head of the criminal organization.

Upon arriving at on Mariano Rojas Avendaño street in the San Simón neighborhood, in Benito Juárez, the agents faced bullets with a subject who noticed the police presence. Although the aggression was repelled, one of the policemen was injured with bullet shards in the right arm, the uniformed man was treated on the spot and did not require a transfer to the hospital. All the people arrested, along with the insured, were sent to the Public Ministry, in particular, to the General Coordination of High Impact (Photo: CDMX / SSC Prosecutor’s Office)

Five men and one woman were arrested at this site. They made sure “About 3.5 kilos of green, dry weed similar to marijuana, wrappers that apparently contained cocaine and a transparent substance known as crystal; in addition to three long weapons, two short ones, several useful cartridges and a gramera scale ”.

For the search of an address in the neighborhood Iztaccíhuatl were required federal agents of the National Guard, as well as elements of the Special Reaction and Intervention Group. Only one man was arrested and 78 doses of cocaine were seized.

“In the Colonia Portales Norte, two men were detained along with approximately 20 doses of green vegetable with characteristics of marijuana. In a building in the Niños Héroes neighborhood, another man was arrested. Two of the latter properties were insured and remain in police custody, as part of the integration of the corresponding investigation folder”, The dependencies abounded.

All the people arrested, along with what was insured, were handed over to the Public Ministry, in particular, to the General Coordination of High Impact. This instance will be in charge of determining the legal situation and will continue with the corresponding investigations. 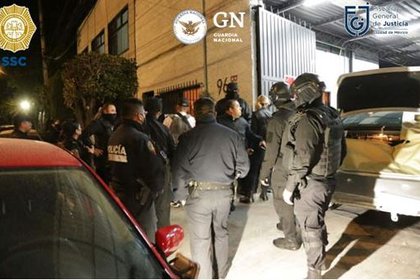 According to a report from the capital’s Security Secretariat, The Unión Tepito dominates the Cuauhtémoc mayor’s office. Especially in the colonies of Manuel Doblado, commanded by Lalo Ramírez Tiburcio, the Chori; Centro and Lagunilla with Víctor Hugo Ávila Ramírez, the Huguito in front; Peralvillo, Morelos and Tepito, whose leader would be Cristián Emanuel Flores Ramírez. In these demarcations they carry out extortion, drug dealing, house collection and assassinations, as well as intimidation of merchants. Another ringleader is Dilan Alexis Chávez, the Dilan.

Brand clothing, exotic animals and even a vase from the Ming Dynasty: luxury and ostentation in the drug traffickers of Unión Tepito

Union Tepito operator and investigated for the crime of Mazahua children: La Chofis was arrested again

The “little devil” got stuck on the sidewalk and fled: that’s how a man was carrying the remains of the dismembered children