The generational leap from DDR memory technology to the next DDR5 is imminent, estimating some first launches at the end of this year, which will include the new RAM memories of Corsair. And it is that the company has shared a publication on its official blog to advance some details and changes that it will offer with its new batch of DDR5 products.

For starters, the company has published that its DDR5 modules will run at a speed of 6400 MHz, twice the current standard, reaching a bandwidth of 51 GB / s. However, these improvements have been achieved in conjunction with an optimization of the power required to run this new technology. While the DDR4 standard required 1.2 volts to work, the data advanced by the JEDEC ensures that the new standard DDR5 needs only 1.1 volts to work. A reduction that will not only allow us to save slightly on energy expenditure, but will also result in lower temperatures for memory modules.

Finally, one of the biggest improvement points for Corsair memory will be the single DIMM capacity. Although with the current generation of DDR4 we have unique DIMMs with a capacity of up to 32 GB, with the new DDR5, the company plans that and build a single DDR5 DIMM with up to 128GB of memory, quadrupling the current cap. 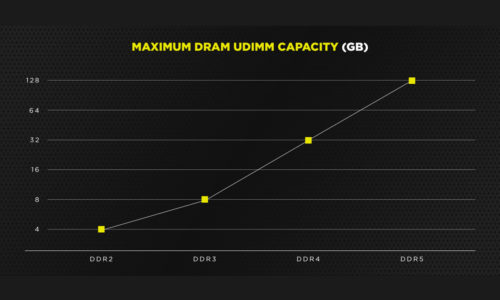 As we have seen before, the arrival of a new generation of memories is a critical issue. And is that the new standard DDR5 will need a new platform to run, currently counting only on future support for Intel’s Alder Lake-S, with an availability date later this year.

The overall single access latency with DDR5 remains relatively unchanged, while the CAS latency has increased, the overall latency of a top-tier DDR5 kit will be similar to previous generations of DRAM with 14-15 ns thanks to improvements that we mentioned earlier.

Thus, in general terms, this new standard approved by the JEDEC shows, on paper, significant performance, power, operations, or capacity benefits compared to the current DDR4, in addition to other advantages related to the manufacturing process, the improvement of the data controller, the integrated power management circuit or the error correction code (ECC) that these memories include for workstations or servers.