A certain bittersweet taste must have Jon rahm after finishing the first day of the Masters in a Augusta National as it was played in the old days, difficult and with hard greens except for a full and reborn this Thursday afternoon American time Justin rose, solid leader with 65 shots (-7) after scoring seven birdies and one eagle! in 10 holes from 8, a brutal streak. You have to take your hat off to the English golfer, lost in recent weeks, even months, but recovered for the cause of this Grand Slam by signing a simply extraordinary card given the conditions of the course this Thursday.

The Basque finished at par (72) after playing a very orderly, patient lap, with very few errors, which must be assessed in due measure because Augusta National was not there to do mischief yesterday (well, for Justin, yes, of course) and if not, ask the current champion, Dustin Johnson (74), or Rory McIlroy (76). Rahm is top 15 to 7 strokes of the British player.

It was a shame the bogey at 18 of the world No. 3, remember in his fifth Masters and with three top-10s to his credit since his debut in 2017. A birdie on hole 2, par 5; a bogey-6 with three putts on hole 8, also par 5; a birdie on the 15th hole that was about to be an eagle after hitting one of the best shots of the day, with the ball at rest just 4 meters from the flag, and the bogey on the last (he missed the green by far by the left and could not hole to save the pair from two and a half meters), were his figures under par and over par on the card.

It’s a shame Jon’s final return, although the result is good. After Rose’s impressive arreón, it is the fourth time he has led the Masters after the first round, he is far from the British, second in 2017 after losing in the playoff with his friend Sergio García.

Until Rose’s arrival, the clubhouse leaders were the American Brian harman and the japanese Hideki Matsuyama, both with 69 strokes, while the 2018 champion also took off with bogey in the 18, Patrick Reed (70). 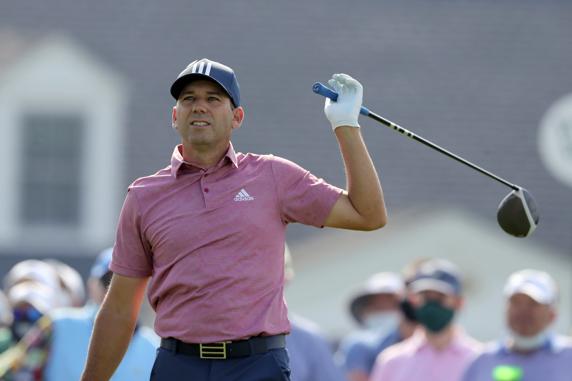 Sergio Garcia on the tee of hole 1, which finished with bogey

Much worse was the Castellón Sergio garcia (76), champion in 2017. He did not have a good or comfortable start to the day, rather the opposite. The three bogeys in the first four holes weighed on Sergio’s card throughout the course. He added one more bogey in the 9th and in the second 9 he kept the type, he had some other option to scratch shots to the field, but the only birdie of the day came on the 16th hole after a blow from the tee. In 18 he closed his performance with the fifth bogey, for 76 hits (+4) and this Friday Borriol will have extra work to avoid being eliminated.

The last of the three Spaniards to take the field was the double champion at Augusta Txema Olazábal, very fierce throughout the tour to end the day with a bogey on 18 and 75 shots (+3). The Gipuzkoan scored three bogeys, two birdies and a double bogey on his card. Olazábal, 55, is playing his 32nd Masters and has 5 top-5s to his credit.

Bad end of return also for the defender of the title, the world No. 1 Dustin Johnson, who seemed to put the direct in this first day after holeing from outside the green on the 11th hole for birdie, a result that he repeated in the 13th shooting for eagle, but a bogey on the 16th hole (three putts) and a painful double bogey on the 18th (he lost the fairway and again three putts) brought him to 74 strokes, two over par. It is curious that the 2020 Masters champion with several records lost five strokes in this first round (three bogeys and one double bogey) while in the entire tournament last November he made only 4 bogeys! on 72 holes.

In the afternoon session another Briton was also the protagonist, Tommy fleetwood, who arranged a low-key 74-stroke round with a hole-in-one at 16.

In this afternoon half-day they also fought their own way not to get off their heads various candidates for the green jacket such as Bryson DeChambeau, Jordan Spieth, Justin Thomas or Collin morikawa.