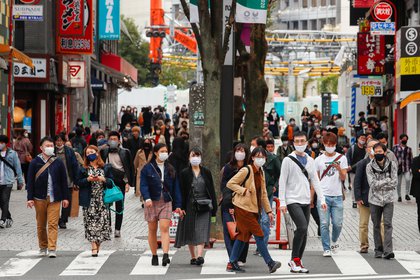 Tokyo has raised its alert level to the coronavirus to the maximum after verifying for the first time more than 500 cases of COVID-19 in a single day, within a spike in infections that also extends to other areas of the country and has led to Yoshihide Suga government to study new restrictions.

Suga has admitted that Japan is on “high alert.” The Asian country surpassed 2,000 daily positives (2,201) on Tuesday and the president has instructed the ministers responsible for monitoring the pandemic to take action, while urging citizens to wear masks in restaurants as far as possible. possible, according to the Kiodo agency.

Tokyo, one of the main epicenters of infections, reported 534 new cases on Thursday, above the record reported on Wednesday, when it reported 493. Local authorities have formally raised the alert to level four, the maximum, which it implies assuming that the virus is “spreading.”

The governor, Yuriko Koike, has urged the population to wear masks and also to reduce the end of the year celebrations, although she has not recommended a business closure, according to the Bloomberg agency. Nor are containment measures envisaged, for which new legal bases would be necessary.

In the case of Tokyo, the persistence of the pandemic leaves in the air the situation in which it will find itself facing the Olympic Games, which it already had to postpone this year. IOC President Thomas Bach and the local organizing committee have advocated going ahead with the planned schedule.