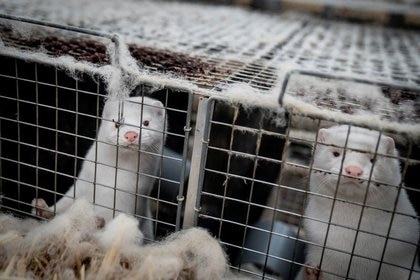 File photo of minks on a farm near Naestved in Denmark. Nov 6, 2020. Ritzau Scanpix / Mads Claus Rasmussen via REUTERS

COPENHAGEN, Nov 19 (.) – A new coronavirus mutation originating from mink farms in Denmark is “very likely” extinct, the Health Ministry said on Thursday, citing an assessment by the State Serum Institute, which deals with the infectious diseases.

No infections with the new variant of the virus, known as Cluster-5, have been recorded since Sept. 15, the ministry said.

Two weeks ago, Denmark ordered all domestically raised minks to be euthanized to curb widespread outbreaks of COVID-19 on farms, a situation exacerbated by the discovery of a mutation of the native strain, which authorities say showed sensitivity reduced to antibodies.

On Wednesday, the country’s agriculture minister resigned following the government’s admission that he did not have the proper legal basis behind the order to slaughter the animals, making it a possible constitutional violation.

Opposition parties in Denmark are calling for Prime Minister Mette Frederiksen to resign as well, saying she is ultimately responsible for the move.

Frederiksen has publicly apologized, but maintains that the decision to euthanize all the minks was the right one and was based on an assessment by the health authorities.

Building on better infection figures in northern Denmark, where most of the country’s mink farms are located, the Health Ministry also announced Thursday that it would ease restrictions imposed two weeks ago to slow the spread of the virus.

Minks have shown particular susceptibility to coronavirus infection, a problem compounded by the fact that they are raised in large numbers and closely together, according to the World Health Organization.

(Reporting by Nikolaj Skydsgaard. Edited in Spanish by Javier Leira)