The Ministry of Health (SSa) reported that, until this Wednesday, November 18, They have registered 1,015,071 accumulated contagion cases of coronavirus (COVID-19). Furthermore, since the beginning of the epidemic, Mexico has suffered 99,528 deaths.

The above represents that there was an increase in 3,918 infected in the last 24 hours, as well as 502 deaths.

Likewise, in the country there are 67,038 suspected cases (with the possibility of a result), 1,239,269 negatives and a total of 2,632,675 people studied from the first case, which means that the Positivity rate remains at 42 percent.

Refering to hospital occupancy nationwide, the official reported that in general beds, the occupation is from 37%; while the beds with fan they record the 28% Of occupation.

This was reported by Dr. Jose Luis Alomy, General Director of Epidemiology, from the National Palace, in the day 172 of the New Normal. 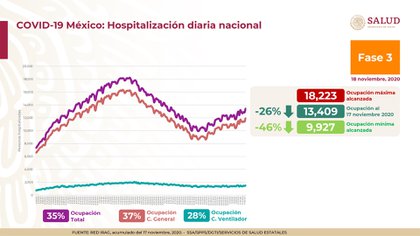 For his part, Dr. Hugo López-Gatell, Undersecretary for Health Promotion and Prevention, pointed out that smoking has become a public health issue for several decades, but during the pandemic, concern increased, due to the decrease immunity to SARS-CoV-2.

Smoking is the fourth leading cause of death from covid-19

In addition, he assured that both traditional cigarettes and new devices such as vapers or electronic cigarettes can cause lung cancer, which is why he called on the population not to fall into marketing deceptions.

There is no scientific evidence that they are less harmful