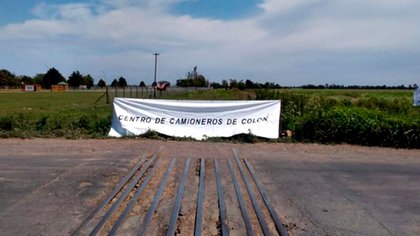 An unusual protest by truck drivers took place in the last hours in the Buenos Aires city of Colón, and was organized by members of the Argentine Confederation of Automotive Freight Transportation (Catac).

According to media reports in the area, for four days the truckers blocked the passage of a freight train formation of the Nuevo Central Argentino company that was moving to the Cargill storage plant, to fulfill the task of loading grain and from there transfer them to the port area of ​​Gran Rosario.

Due to the protest, the train could not reach its destination and on this day it withdrew from the place without being able to load. Now the merchandise will be transported by truck as requested by the protesters.

. I try to dialogue with representatives of the Cargill company, and their spokesmen only said “no comment”, although they clarified that “the situation is already normalized.”

In statements to the Colón media, the president of Catac, Ramon Jatip, justified the protest. “We explained to the Cargill company that this cereal had been brought by trucks from Colón and it is the one that will allow transporters to reach the end of the year. They could not ignore the sacrifice made during the pandemic of sending trucks to load everywhere “, he claimed.

And I add: “There were negotiations and we reached an agreement. We propose that the cereal is taken by truckers from Colón, who are the ones who brought it. We can have a meeting in the future and diagram the future for the growth of the company that will be good for Colón and the carriers. We thank the people of Cargill who understood that this was not the time for this decision. “

In addition, the union reported that the company was not complying with an agreement, without there being a signed contract between the parties, when transporting the grains by train. “The company told us that they would do a test to see if the roads would resist and we consider that it is not the time to carry out this type of tests. These adventures are not for these times of pandemic,” said the president of the Confederation.

Jatic commented that the representatives of the railway company reported that “the train derailed three or four times before reaching Colón, and that would mean a complexity to later move to Rosario with the wagons loaded and with half the load. And the trucks, on the other hand, in 3 or 4 hours can arrive with all the security measures in the port area ”.

Another video of the claim (Credit: @emigbusquet)

This behavior of the union generated rejection in different sectors. One of those who spoke out was the former Minister of Agriculture, Luis Miguel Etchevehere, who from his Twitter account said: “This was not allowed in the Macri administration. With the Ministries of Security, Transportation and Agroindustry, we created Safe Harvest and we removed the mafias from the farms and to the ports, avoiding situations like these. Today the absent state allows these abuses ”.

It should be remembered that the “Safe Harvest Plan” was launched in 2017 with the aim of improving security in the vicinity of port terminals and the entire chain, as well as comprehensively addressing everything related to harvest logistics, among others.

A case very similar to the one that took place in Colón happened in November last year in the Buenos Aires city of Junín, and was also carried out by members of Catac. On that occasion, they blocked the passage of the San Martín railroad, at the height of the local road that connects routes 65 and 7, in rejection of the loss of jobs at the Nidera plant. There were also similar mobilizations in General Villegas.