The production model based on the Volkswagen ID. Space Vizzion is one of the electric models that the German brand had confirmed since last December, and which we noticed. Almost a year later Ralf Brandstätter, Volkswagen Passenger Cars CEO, has confirmed its entry into manufacturing for 2023.

The concept of the Volkswagen ID. Space VIZZION se will transform into a serial production model, starting in 2023. We told you exclusively at the end of last year, and almost a year later, an important person in charge of the German firm has confirmed it. A new electric that will preserve the structure and format of the conceptual advance, confirming itself as a more familiar alternative.

Ralf Brandstätter, Executive Director Volkswagen Passenger Cars, has confirmed this in his professional LinkedIn profile, a double announcement. And it is that with the production of six electrics at the Zwickau factory, which for now is known as Volkswagen ID.5, has been assigned to another in the triangle of sustainable mobility, the Emden factory. Curiously, the future model cleaner and equivalent to the Passat Variant will be manufactured in the same factory as the combustion engine. 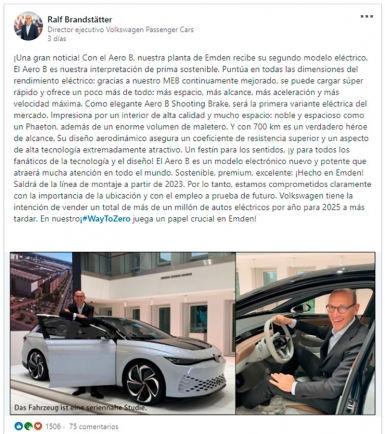 The future electric Shooting Brake based on the Volkswagen ID. Space Vizzion will offer the space of a Phaeton

With the entry into production planned for 2023, and with the assigned development code of “Aero B”, the president pointed out some interesting qualities of the future model, such as the ample space that it will offer inside comparable to that of a Phaeton, and a more than generous volume in the trunk. Among its qualities it also promises a new dashboard design, more elaborate and also with greater autonomy that will reach 700 kilometers.

Brandstätter has confirmed these details that we confirm exclusively, as well as that will retain your Shooting Brake design, also aiming at higher performance, especially acceleration and top speed, which he described as “A feast for the senses, and for all fans of technology and design! The Aero B is a powerful new electronic model that will attract a lot of attention around the world.

Technical and performance characteristics that will match the Passat, the combustion alternative that will hit the market just a year earlier, in 2022. For the sports family based on the MEB platform, they will be offered bbatteries with a higher capacity than the current 77 kWh, since the maximum autonomy of this is 550 kilometers and it is intended to reach 700 kilometers, which implies a gross capacity of 110 kWh.

In terms of performance, Volkswagen will use a combination of a single 205 kW electric motor, 275 hp in a combustion model, on the rear axle. In addition, two versions with two electric motors and all-wheel drive will be offered with the 225 kW and 280 kW, figures equivalent to 306 and 375 hp. Gone are the unfounded rumors of turning the Space Vizzion into the ID.3 Variant as more than one had been targeting.