The death toll confirmed after the partial collapse of a 12-story building in Surfside, Florida, rose to five this Saturday, while another 156 people remain missing, local authorities said late at night, as dozens of rescuers continued to work among the debris on the third day after the accident.

“We found another body today and we are still identifying it. We will have to use DNA ”to this end, explained Miami-Dade County Mayor Daniella Levine Cava at the last press conference of the day. He added that they were also found among the rubble other unidentified human remains.

Within hours, county police released the identities of four of the fatalities found in the rubble. Is about Stacie Dawn Fang, 54 years old; Antonio Lozano placeholder image, of 83; Gladys lozano, of 79; Y Manuel LaFont, of 54.

The mayor reported that firefighters were able to control a “large” fire inside the rubble, which made rescue work difficult for part of the day. The flames began after a fire hose exploded on one of the lower floors on the north side of the building, uncovering a cloud of white smoke and a strong smell of sulfur. 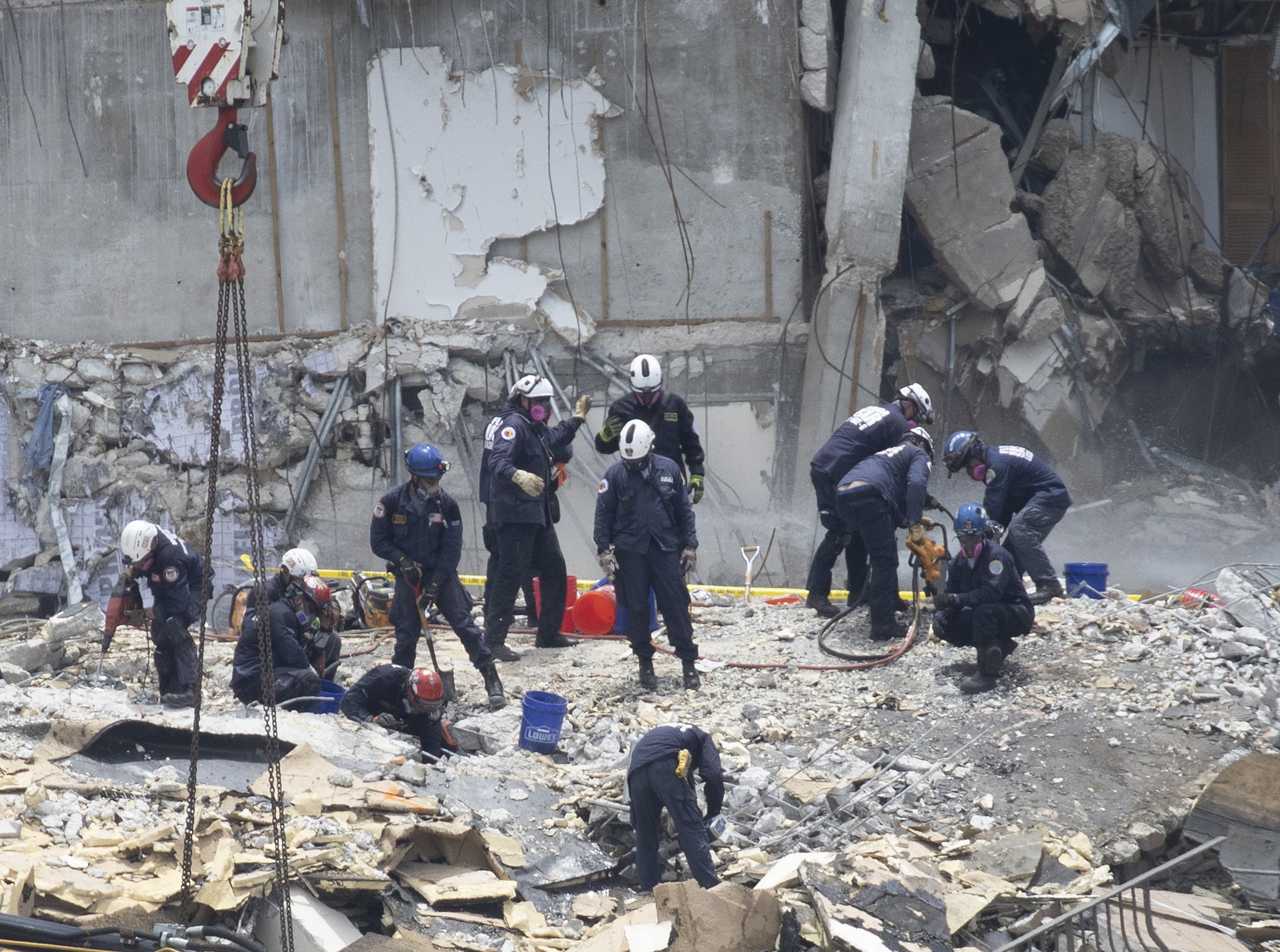 Rescuers have continued to search for survivors since Thursday. / Photo: Joe Raedle / .

The mayor ordered an immediate audit of all buildings older than 40 years and more than five stories in Miami-Dade County, as well as those built by the same developer who built the Champlain Towers condominium complex. It’s unclear how many buildings will be audited, but Levine Cava said the review would take place “within the next 30 days, starting right now.”

The Champlain Towers condominium, of more than 130 apartments, It was built in 1981 on former wetlands and it was being subjected these days to a process of revision of structures, as required by the city of Surfside when 40 years of construction have passed. There is still no clarity on the causes of the collapse, which affected 55 apartments.

Three years before the crash, an engineer had already warned of imminent danger in a report that emerged from the accident.

The partial collapse of a twelve-story building in Surfside, Miami Beach. / Photo: .

According to the report, obtained by Noticias Telemundo, consultant Frank Morabito found alarming evidence of “significant structural damage” to the cement floor below the pool deck and “abundant” cracks and collapses of columns, beams and walls in the parking lot. under the building, as well as the lack of adequate drainage in the pool deck. These damages go back to the origin of the condominium.

Another 2020 investigation from Florida International University had found the building to have been sinking at a worrying rate since the 1990s.

Search and rescue operations entered their third day on Saturday, lowering hopes that those among the rubble could be found alive.

The mayor emphasized that relatives should not lose hope, while dozens anxiously await news of their missing loved ones, who may have been in the part of the building that collapsed early Thursday morning.

“Our top priority remains search and rescue, and saving as many lives as we can,” he said.

Speaking at the same news conference, Florida Governor Ron DeSantis added that the Federal Emergency Management Agency (FEMA) is on site and working with state and local officials to continue the search and rescue efforts.

“We are working well,” he assured.

But the relatives and friends of the disappeared have expressed their frustration that only five bodies have been recovered in more than 72 hours of searching and that there are still no definitive answers on the causes of the collapse. 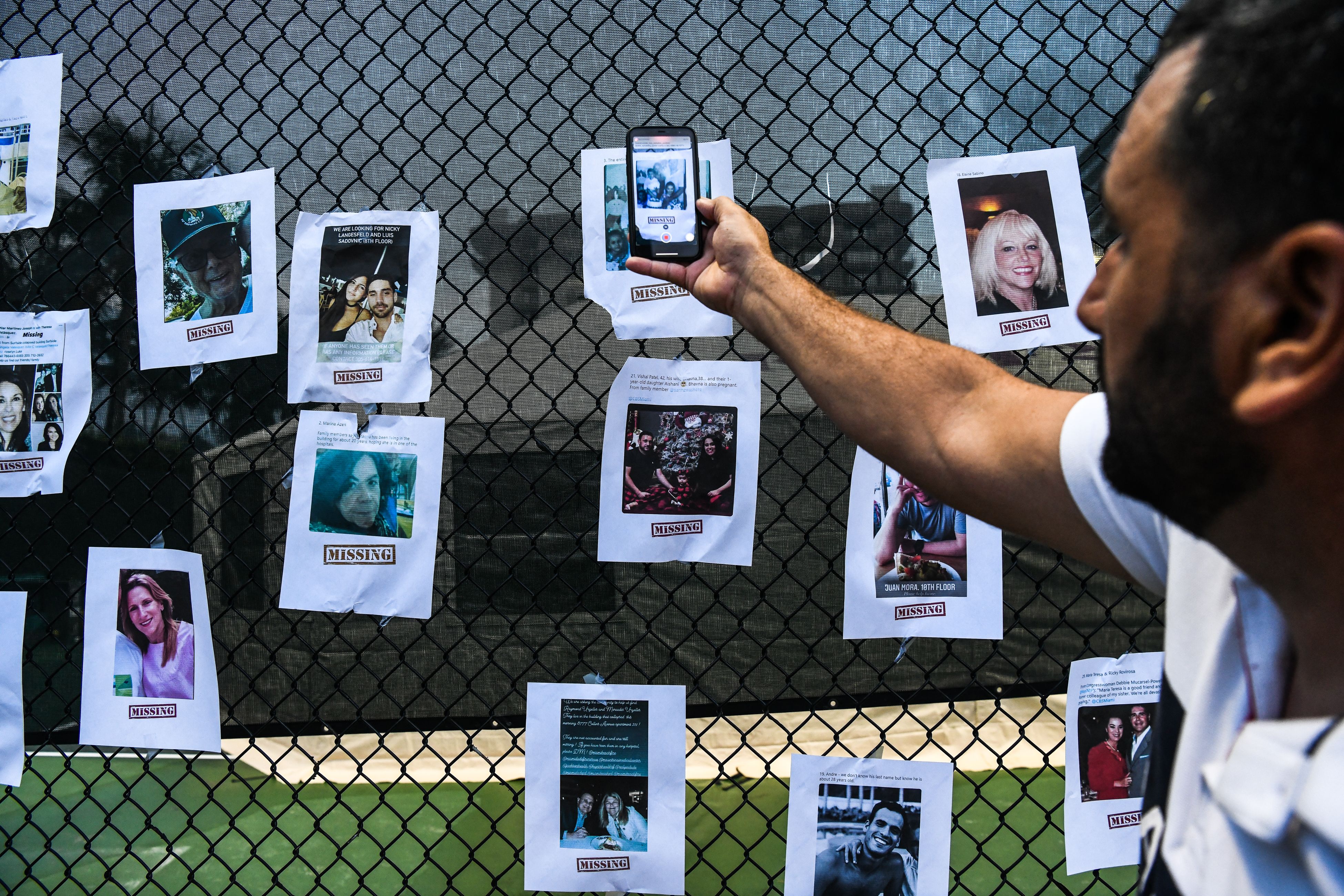 A man uses his phone while looking at photos of missing residents from the collapsed building in Surfside. / Photo: CHANDAN KHANNA / . / .

“It has been a long time,” a woman whose 26-year-old daughter is among the more than 100 disappeared complained this morning through tears during the authorities’ press conference at a Surfside hotel that was established as a family reunification center. . “I know they are doing everything they can, but it is not enough.”

Erika Benitez, a spokeswoman for the Miami-Dade Fire Department, said Saturday morning that it had been a long time since rescuers had heard sounds of people under the rubble. But he added that the search and rescue team believed that survivors could still be found.

Authorities confirmed Saturday night that rescue teams from Mexico and Israel are in the area of ​​the landslide to assist with rescue efforts.

Surfside is an area with a strong presence of the Orthodox Jewish community, and there are located some of the largest synagogues in South Florida. The area, which some call little Buenos Aires, is also home to a large Argentine-American community.

Among the disappeared are citizens of Argentina, Colombia, Israel, Paraguay and Venezuela.

Governor DeSantis declared a state of emergency hours after the collapse and after President Joe Biden announced that he was awaiting his order to send federal resources. The emergency includes the search for available housing to house those affected by the collapse.

Surfside Mayor Charles Burkett said city officials are considering the evacuation of the sister towers of the Champlain Towers.

The condominium complex is made up of three residential towers. The partial collapse was in the South tower, of 136 units. There all the homes have been evacuated. But the North and East towers continue to house residents. Those who want to move can do so with the help of FEMA, the mayor said.