We face on video the three benchmark compacts: the Audi A3 Sportback, the BMW 1 Series and the Mercedes A-Class. What is the German trio like? What are their main differences? Which one to buy? Don’t miss our analysis.

Which premium compact is most interesting?

Anyone looking for a premium compact will always have three models in the pools: the Audi A3 Sportback, the BMW 1 Series and the Mercedes A Class. Today we analyze the German trio to find out which one is the best but I tell you one thing: it is amazing how even they are in everything.

All three are committed to very different designs and are a true reflection of the design trends of their respective brands. The Mercedes A-Class is the most conservative, it wanted to be the most elegant showing an image of smooth lines that follow the successful style that the models of the star brand have shown in recent years.

The Audi A3 Sportback is the one that presents a more aggressive look, with an exterior full of straight lines and where the most prominent element is the huge front grille so characteristic of Audi. No matter where you look at it, it is unmistakable that it is a model from the manufacturer of the four rings. 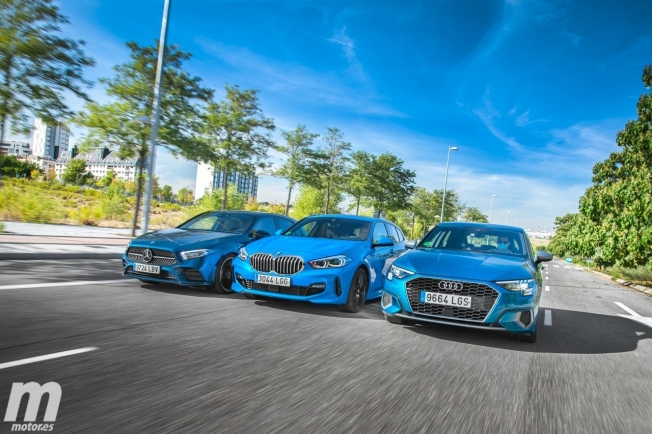 The grille also has a special role in the BMW 1 Series, although its main attribute is not in sight: it has changed the rear drive of the previous generation for a front wheel drive platform. A very relevant change that eliminates one of its peculiarities in favor of greater habitability.

The dimensions are almost traced in terms of width and height. However, in terms of length there are some slight differences between these compacts: the Series 1 is the shortest while Class A turns out to be the largest. Anyway there is barely 10 cm of difference between the largest and the smallest.

Let’s talk about cargo space. In Series 1 we have a 380 liter boot that stands out that it has a compartment under the floor of a very usable size. By folding down the rear seatbacks, 1,200 liters of capacity are achieved. It has certainly been a very big improvement over the previous generation of the BMW compact and that is thanks to the fact that it is now front-wheel drive. 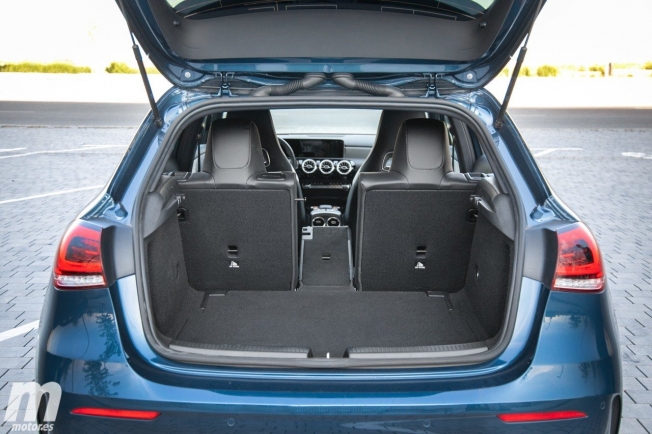 The trunk of the Mercedes A-Class proposes 370 liters 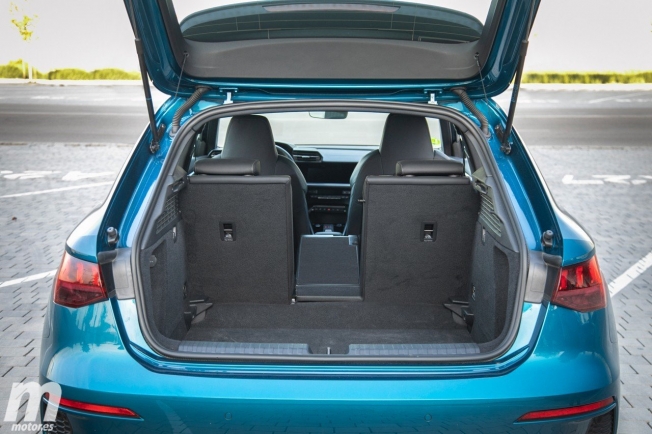 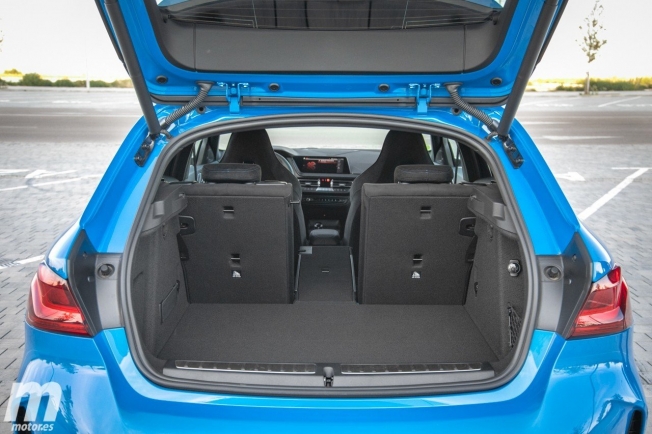 A detail that draws attention is that despite being the longest, the Mercedes compact is the one that has the smallest boot with 370 liters, although they are barely 10 liters less than its rivals. Under the floor there is a small compartment. Curiously, folding down the rear seats goes from being the one with the least volume to being the one with the most, although again the difference with its opponents is meager.

Audi and BMW tie offering exactly the same volume, 380 liter capacity. As for the A3, its cargo space can be adjusted in height thanks to a double bottom that can be very practical because we can play more with the space and the distribution of the elements that we introduce inside. These three cars offer more or less the same load capacity but the configuration is slightly different.

Inside, the Audi A3 offers a more minimalist design and a futuristic touch with its metallic accents, abundant straight lines and sharp angles. Puzzling the location of the air vents that do not seem too integrated with the rest of the design. Makes a good visual impression but to the touch does not transmit as much quality as its rivals– Abuses the impractical gloss black finish and there are too many plastics. It doesn’t feel much better than a Volkswagen Golf or a SEAT León. The best are the seats, they are the most comfortable in this comparison. All three cars here have optional sports-trimmed seats and integrated head restraints.

The A-Class has the interior that causes a more technological impression thanks to the two screens that appear arranged together and some really striking air vents. The quality has clearly increased compared to the previous generation but we still find some plastics that slightly detract from the final result, especially the famous piano black. 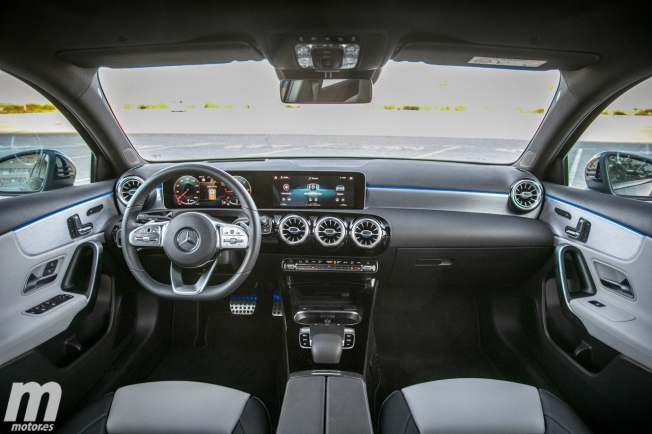 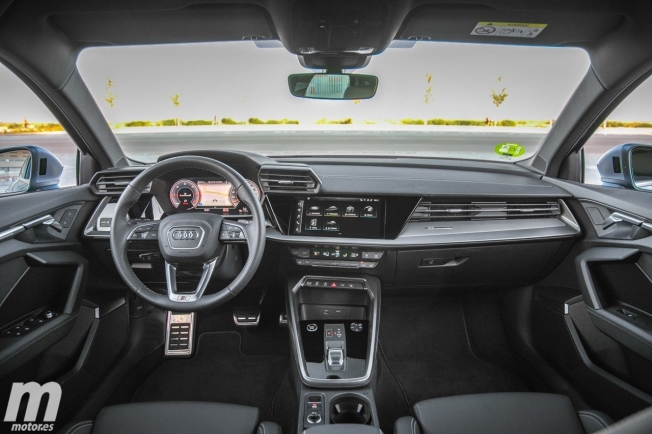 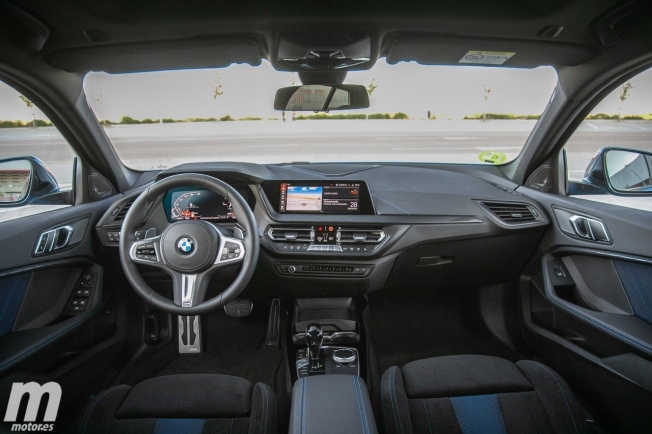 The Series 1 boasts an impeccable quality of performance

For its part, the Series 1 has a more traditional interior design but it is also the one that transmits more quality. Everything transmits solidity, has a good touch, shows a very studied ergonomics and in general the buttons have a very pleasant handling. It is not a surprising interior by design but certainly it is very well done. Special mention should be made of the really striking upholstery of the test unit’s seats.

The equipment possibilities of the three models are vast, all of them with the latest technological innovations that can be found in this segment. They are very even and in all three cases the usual thing is that you have to regularly resort to the list of extras, generously increasing the final rate.

Speaking of technologies, it should be noted that each of these models can mount a fully digital instrumentationThe Audi A3 being the largest at 12.3 inches. BMW proposes a 10.25-inch instrumentation with a more classic look and without too many customization options. For its part, Mercedes equals BMW in the size of the screen, also with 10.25 inches, but in this case the possibilities of choosing which data is shown are much more numerous. 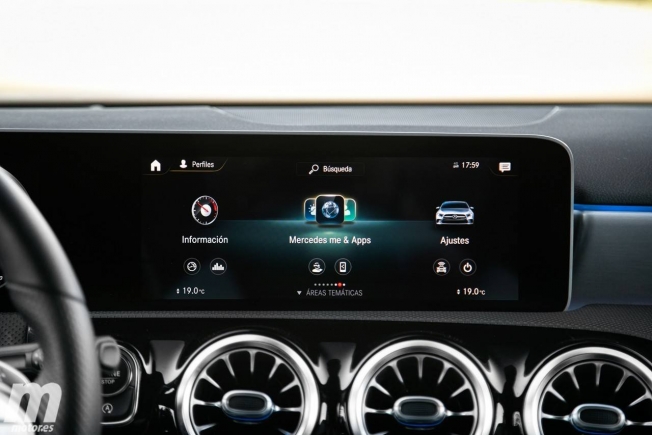 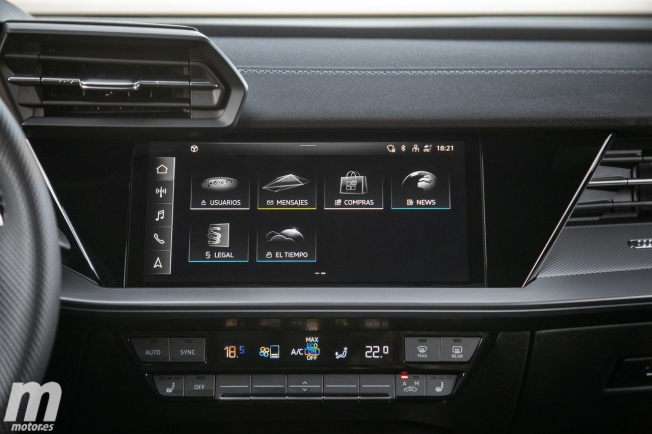 The A3 carries the MIB3 multimedia system, the third generation of Audi’s modular infotainment platform. 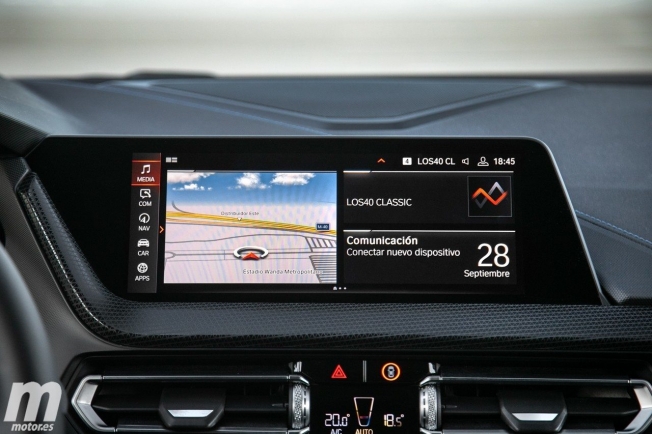 BMW has the easiest system to operate

If you look at the multimedia system, all three offer all imaginable functionalities, exceptional image quality and are without a doubt the three best infotainment systems what’s in this segment. But as with the instrumentation, again it is the Class A that convinces the most. The screen is 10.25 inches, the interface has a very attractive and visual design and stands out above all for having the most advanced voice recognition system.

The Series 1 has a 10.25-inch screen, the same size as the Class A, where the interface is more traditional but is also the most intuitive and easy to use. The main reproach is that it lacks connectivity with Android Auto, it only proposes Apple Carplay. His opponents are indeed compatible with both systems.

For its part, in the A3 Sportback it is the one with the smallest multimedia screen with 10.1 inches and is located in too low a position, forcing you to take your eyes off the road more than the A-Class or the Series 1. It also has a thousand functions but the air conditioning is not included within the infotainment system but rather has a separate module, a success from Audi that deserves a mention because his brothers Volkswagen Golf and SEAT León have not done so. 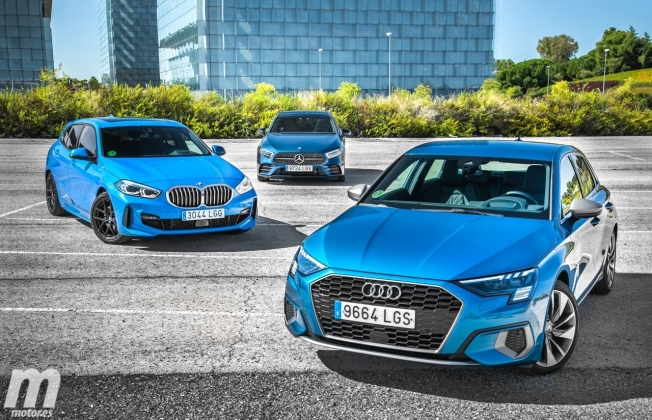 Of the three, the Audi A3 Sportback has been the one to hit the market most recently

By opting for front-wheel drive, this Series 1 can make better use of the space at the rear, improving its rear seats compared to the previous generation. But nevertheless, access is the most complicated of the three because there is not much gap when opening the door. Legroom is adequate, but the side of the roof is close to the head. In addition, the bench is the one that is higher and the one that is less soft.

The A-Class falls in the middle when it comes to space. The seats gather more the body but that makes the central plaza the most uncomfortable of this trio due to its shapes. There is reasonable room for the knees but not for the feet, so passengers up to 1.80 m tall will be fine but from there they will travel uncomfortable.

The rear seats of the A3 are those that are best resolved despite the fact that the differences with his two opponents are stark. They offer more or less the same space to the occupants as their rivals but the access is the widest and also the seats are the most comfortable. The three components of this comparison offer the same comfort elements in the second row of seats, offering ventilation outlets, USB sockets, pockets behind the front seatbacks and an armrest with cup holders.

We tested the 150 hp diesel

For this comparison we have chosen the most interesting diesel versions from the catalog of these models. We have the BMW 118d, the Mercedes A-Class 200 d and the Audi A3 Sportback 35 TDI and on paper they are practically identical. They all use two-liter four-cylinder diesel engines that develop 150 hp, are associated with an automatic transmission and are front-wheel drive. Will there be differences in practice?

The truth is that none of the three proposes a particularly dynamic driving but with the BMW is the one we will have the best time with. The Series 1 still has a sporty touch, it is the most cheerful thanks to the chassis that seems the best tuned, the steering is very precise and the suspension has a fantastic setting. The transmission also deserves a mention because with this mechanics, BMW opts for a torque converter, although it also offers dual-clutch changes in other engines. The A-Class and the A3 opt for double-clutch boxes. 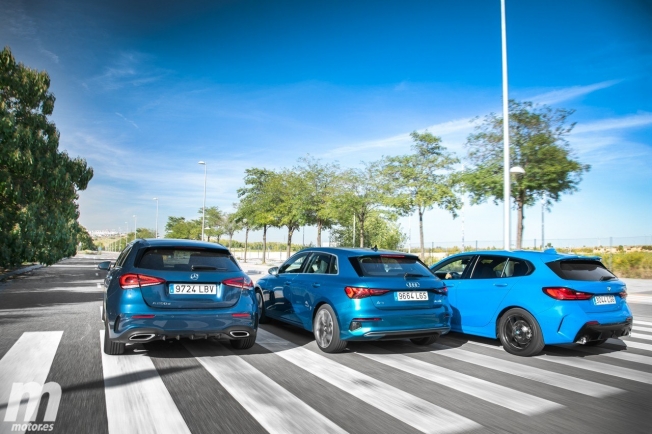 The A-Class shows good acceleration and in that regard it has a very slight advantage over the other two, but curiously it is the engine that offers the least torque. Too is the most comfortable because the damping has a setting that benefits ride comfort and the steering is highly assisted. Too bad the sound of the diesel mechanics is so unrefined.

For its part, the A3 Sportback is in the middle in terms of behavior, it is very balanced. What I liked the most is how well tuned it is as a whole engine-transmission, because it offers a good response but uses very little, is the most efficient of the three cars. It is relatively easy to do tours spending less than 5 l / 100 km while your opponents show data somewhat above that value.

What is more evident throughout this comparison is that between these three cars the differences in global terms are minimal, so with such equality that it is impossible to determine a clear winner. They are very balanced, none of the three is going to disappoint, and the small details and personal tastes will be the ones that tip the balance.

There is one section to mention that is the price. In these 150 hp diesel versions and automatic transmission, the Audi A3 Sportback is around 1,500 euros cheaper than the BMW 1 Series and the Mercedes A-Class but be careful because it is the list price, at the dealership it is likely that BMW and Mercedes will offer bigger discounts that will once again equalize things. The official price places the A3 35 TDI S Tronic at 33,480 euros, the 118d Steptronic at 34,942 euros and the A 200 d 8G-DCT at 35,275 euros.