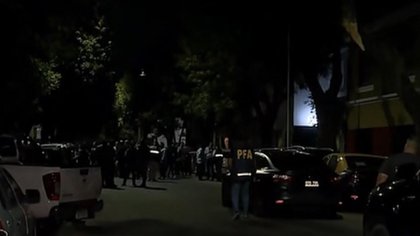 A retired federal police officer was killed tonight by at least one bullet in the head when he resisted four criminals entering his home in the Barracas neighborhood of Buenos Aires and three were arrested for the crime.

The event took place around 8:30 p.m. on the corner of the streets California and Limay River, in said neighborhood in the southern part of the City of Buenos Aires.

Police sources reported that the retired policeman entered his house with his wife when He was surprised by four armed robbers who wanted to enter the property by force.

The man, identified as Alfredo Poggetti, he resisted the assault and the thieves fired at least one shot that hit his head and caused his death almost immediately. The victim was a retired sergeant from the Federal Police. His son works as a system manager for the América channel.

A few minutes from the Argentine Naval Prefecture (PNA) with jurisdiction in the area and the City Police they arrested three suspects in the crime, two men and a woman. However, they were quickly released because they were not involved in the incident.

“I was preparing dinner, I heard two shots, I went out and the lady (of the victim) was like hiding behind a car, but the man was injured in a corridor,” a neighbor of the city told the Chronicle TV news channel. bordering house.

Meanwhile, a relative of the retired police officer said that he was murdered “for defending the woman, because the woman is ill.”

Tonight Neighbors of the victim remained gathered in front of the victim’s house and demanded greater security and justice for the murdered manwhile the experts worked at the crime scene.