Administer a second dose of vaccine Pfizer / BioNTech to a person who received a first vaccination of Oxford / AstraZeneca is safe and effective, according to preliminary results of the CombivacS clinical trial, which promotes the Carlos III Health Institute (ISCIII). Researchers are studying the immune system response (immunogenicity) and safety (reactogenicity), when combining covid-19 vaccines from different technologies, which is called a heterologous regimen against SARS-CoV-2.

Most of the symptoms, which are considered mild and moderate, disappear from the third day after vaccination and no person required hospitalization

According to the data provided in a telematic press conference, the participants who received a second dose of Pfizer presented more neutralizing antibodies of SARS-CoV-2 than the control group in the trial, which received no second doses. In addition, adverse reactions in those who received a second vaccine they were mild to moderate and similar to those of a homogeneous vaccination with Pfizer, such as pain at the injection site (88.2%), headache (44.4%), discomfort generatesl (41.7%), local induration (35.5%), local erythema (31%) and chills (25.4%). Most of the symptoms disappeared from the third day after vaccination and no person required hospitalization.

The ISCIII has presented the preliminary results of CombivacS, in which they participate 673 people under 60 years of age who have already received a first dose of Vaxzevria (Oxford / AstraZeneca). Of these, 441 people are part of the experimental group of the trial, who will receive a second injection of Comirnaty (Pfizer / BioNTech) and who are followed temporarily after administration: seven days later, 14 days, 28 days, three months, six months and one year. Those that have been made public this Tuesday are those of the cut of two weeks of study. The control group, on the other hand, is made up of 232 people.

To calculate the levels of neutralizing antibodies to SARS-CoV-2 in the participants, three different techniques were used: two to calculate IgG antibodies according to the SARS-CoV-2 receptor binding region and a third to confirm that these IgG neutralized the coronavirus, explained the head of the Serology Laboratory of the National Center for Microbiology, Maria Teresa Perez Olmedo.

In the antibody level calculations, it was confirmed that those who received a second dose multiplied markedly seven days after administration and continued to increase from day 14. On the contrary, the antibodies in the control group remained at similar levels during all this time.

In people who received a second dose, a marked increase in the level of antibodies was detected at 7 and 14 days

On the other hand, to confirm that these antibodies were effective against the coronavirus, the serum of patients from the experimental group was studied and ‘confronted’ with pseudoviruses that carried the Spike protein of SARS-CoV-2. This process, called the neutralization test, yielded good results and showed an increase in antibody levels seven times greater than in the control group.

Regarding the latter, Pérez Olmedo reiterated that this increase is higher than expected with other homologous vaccination guidelines: “with two doses of AstraZeneca, for example, the increase is about three times, unlike our study in which a increase of up to seven times ”.

To know the reactogenicity, the participants had to answer a questionnaire of symptoms and adverse effects that they perceived after vaccination and assess them themselves by the perceived intensity: mild, moderate or severe.

All these adverse reaction data are very similar to those of a Comirnaty phase III clinical trial, almost overlapping

Magdalena Campins, Head of Preventive Medicine and Epidemiology at the Vall d’Hebrón Hospital in Barcelona

According to the perceived intensity, 68.3% of the participants considered them as mild, 30% as moderate and only 1.75% stated that they were intense. However, the symptoms in the latter group were malaise, myalgia, headache, and arthralgia, which were not serious. Finally, no case required hospitalization.

“All of these adverse reaction data are very similar to those from a Comirnaty phase III clinical trial, almost overlapping,” he stated. Magdalena Campins, Head of Preventive Medicine and Epidemiology at the Vall d’Hebrón Hospital in Barcelona.

Asked by journalists about the discrepancy between the reactogenicity data from this trial and those from the British Com-CoV, which were published last week and which did denote more mild adverse reactions, Campins has responded that the differences between the two studies have to do with with the designs of each one: “Yours can compare up to four arms [combinaciones de pauta de vacunas] different and we only one, plus we analyze different age groups and administer the doses in different weeks. They are not comparable studies ”, he stressed. 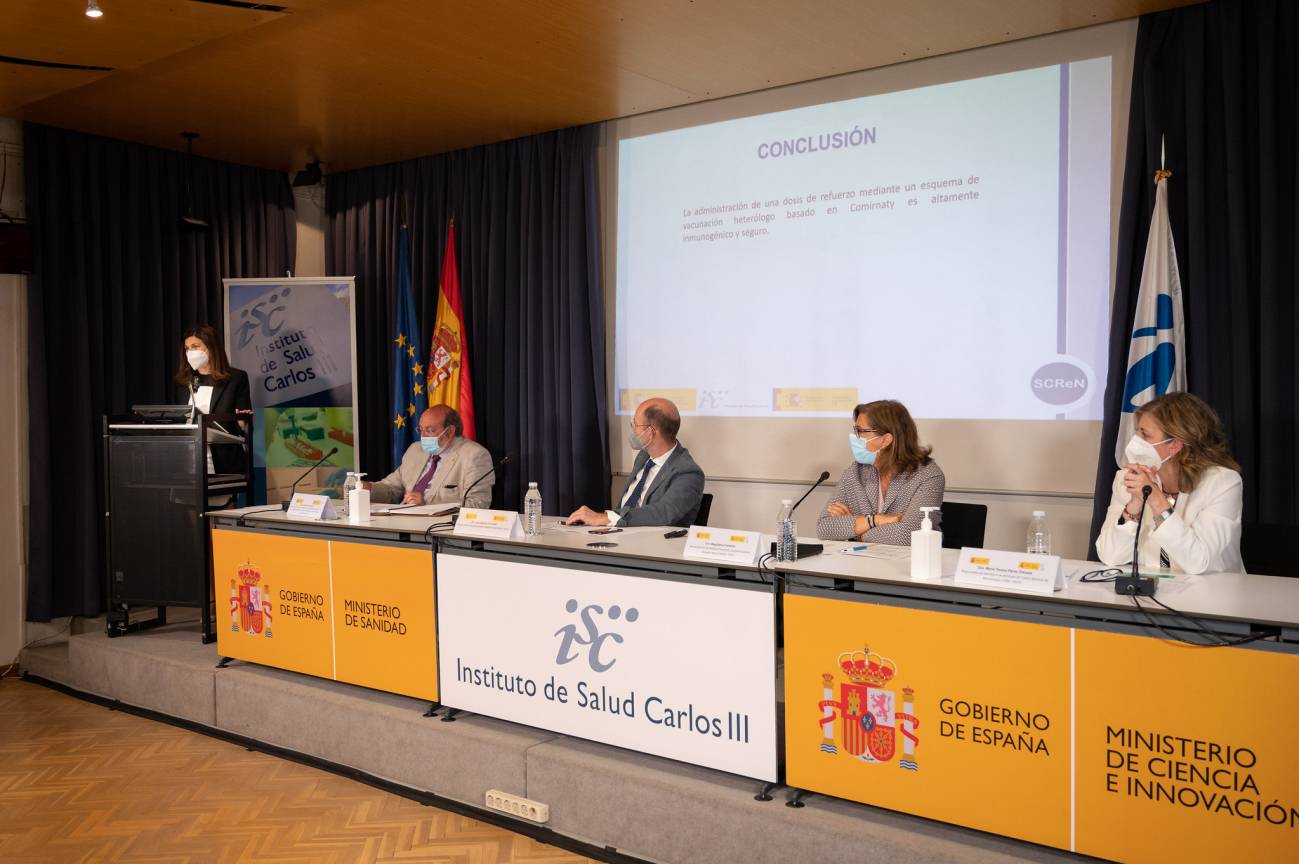 Presentation of preliminary results at the ISCIII headquarters. / Ministry of Science and Innovation

CombivacS is the first worldwide study to provide data on immunogenicity derived from the combined use of two different vaccines. The British Com-CoV study, which also alternates two vaccines, has only published preliminary reactogenicity data. The study of the Spanish public institute is a randomized phase II clinical trial, multicenter and with a 2: 1 ratio, that is, for each participant in the control group there are two participants in the experimental group.

The data of the study have been analyzed by an independent safety committee, which has advised to proceed with the vaccination of people in the control group with the second dose of Comirnaty

The trial will continue in development in five hospitals linked to Health Research Institutes such as Cruces in Vizcaya, La Paz and Hospital Clínico San Carlos in Madrid; the Vall d’Hebron and the Clinic, in Barcelona. For its part, the National Center for Microbiology (CNM) of the ISCIII acts as the central laboratory.

The data of the study have been analyzed by an independent safety committee, which has advised to proceed with the vaccination of the people in the control group with the second dose of Comirnaty, as foreseen by the trial if the hypothesis immunogenicity and reactogenicity predicted. Preliminary results will also be communicated to the scientific community and health authorities.