At the end of last week, amid all the intensity of the coverage of the arrival of the new generation of consoles, our friends at Activision gave us the review code for Call of Duty: Black Ops Cold War, new installment of the popular franchise that of course, promises a lot for a lot of reasons. Due to the compatibility that the game has with the special functionalities of the DualSense, we decided to play the version of PS5, which presents several extremely strange and annoying bugs that we think it is important to mention to you, because at least in our experience, they have had a solution.

Before starting to tell you about my experience, I think it is important to emphasize that I can only speak for the PS5 version. I have no idea if the same issues occur in things like Next Gen versions on Xbox. I repeat, this only corresponds to Cold war at PS5.

The mess of digital licenses

Ok, now yes. After having redeemed the code that I am telling you to start working on the review and content about it Call of Duty: Black Ops Cold War, I noticed that in the console’s download and home rows, the game icon appeared with the legend of “PS4” next to your name. At PS5, games that are versions of PS5, they do not have this legend that I mentioned, indicating that they are precisely from PS5. On the other hand, if you install any game of PS4, it will be indicated next to its name that it is a version of PS4. I know that all this may sound obvious, but you can’t imagine the questions that have come to us in recent days about the new consoles. 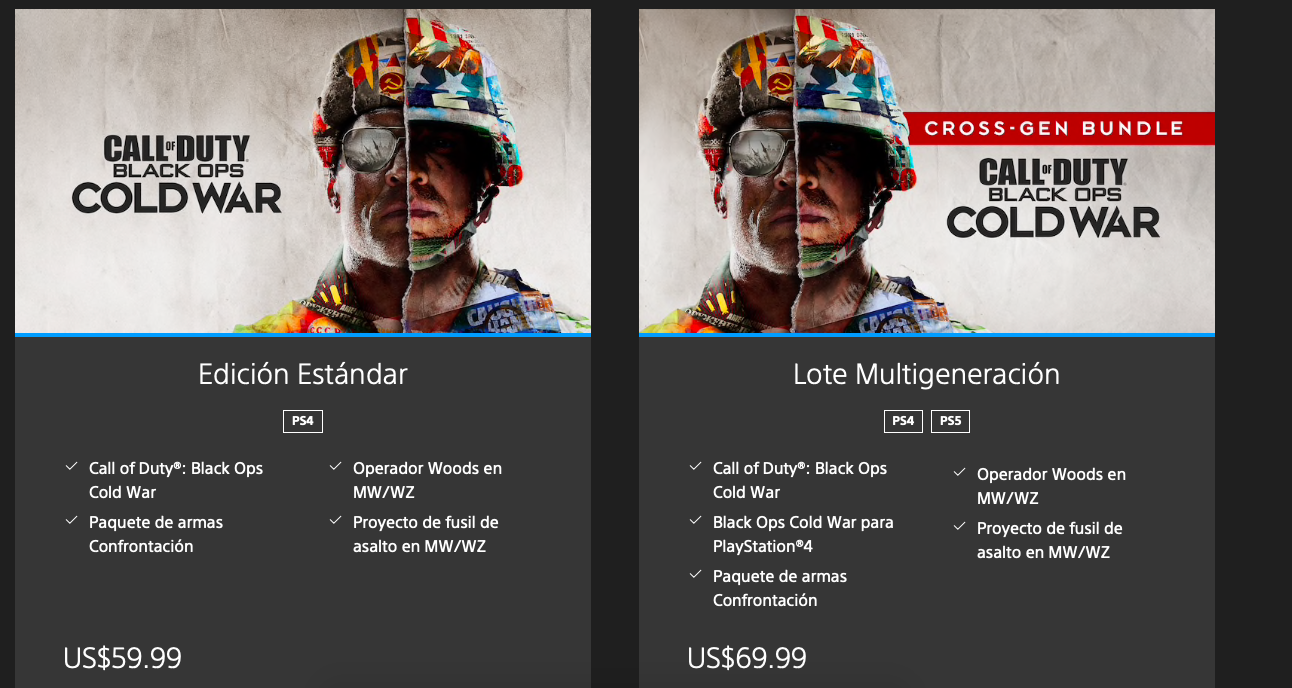 The thing did not stop there. After having played a couple of hours, I decided to end my day to go to rest, turning off the PS5. The next morning I turn on the console and again, next to the name the icon of Call of Duty: Black Ops Cold War the legend of “PS4”. Dammit. In my list of games installed within the storage options of the console, the version of PS5 of the game, but in the bookstore, there was only the PS4, which by the way, asked me to download to play. There was just no way to run the version of PS5. When you go to the store again to ask you to download the version of PS5 To see what happened, again he told me that he only had the PS4 and that to unlock the Next Gen, I had to pay the extra that I mentioned. Then I deleted the game from the storage options, turned off the console, and tried again. Surprise, again I was able to download the version of PS5.

At the moment it has not given me this very annoying problem again, but it is clear to me that the way in which the licenses of this specific version of the game are being checked is a real disaster. I don’t understand why if you are in a PS5, you are given the option to download the PS4 one. It should be the one on your console and that’s it.

But hey, my misadventures with Call of Duty: Black Ops Cold War in PS5 they didn’t end there. After playing a couple of missions and being very surprised how the game relies on the haptic vibration and adaptive triggers of the DualSense, I decided to explore the game options a bit. In Audio, I noticed that it was possible to completely turn off voice chat for the multiplayer, a matter that I did not hesitate to do at once, because I simply cannot stand the shouts and words that Call of Duty players usually use when they are in their natural habitat . What a mistake. The vibration of the controller had completely disappeared Why? Check out what happened to me.

The first thing I did was think that something had moved from the options within the game, since it is possible from there, turn off the functions DualSense. Nothing. Both the vibration and the triggers were on. Next step, check the console options. Nothing either. Both functionalities running. Is it a bug in my control? My second DualSense did not vibrate in Cold war and they both work perfectly with the other games. Conclusion, it is clearly a problem of Call of duty. After having broken the coconut about what could have happened, I decided to go to Reddit to see if someone else had this little big problem and what do you think, it was.

Do you remember that I told you that after my first session I decided to turn off voice chat from the audio options of Call of Duty: Black Ops Cold War? Well it turns out that it was a big mistake, well this generates a bug that completely turns off the vibration of the controller. Yes, so strange and inexplicable. The good thing is that the problem is fixed simply by enabling the aforementioned chat. Why is this happening? There is clearly a bug in the game code that we hope can be fixed soon.

Being an early adopter of any consumer technology always has disadvantages, but the specific experience I have had with Call of Duty: Black Ops Cold War at PS5, it has been especially annoying. Be careful, I’m not talking here about the game as such, we will do that later, we only thought it important to share this with you in case you are in the same situation and do not know how to fix it.