Isaac Brizuela, Chivas player, said that the team is committed to eliminating Necaxa in the repechage and leaving behind the three-year mark without accessing the final phase of the Liga Mx, for this the presence of Víctor Vucetich will be important on the bench and not change our style of play, he said in a videoconference.

Yesterday the dates and times of the repechage were reported. On Saturday 21 of this month, at 7:00 p.m., Santos will play against Tuzos in Torreón and, at 9:00 p.m., Chivas receives the Hidrorrayos.

There is that commitment to the fans who hope to see their team again in the league, and although he acknowledged that it will not be easy to account for the Rayos, the Rabbit was optimistic: I consider that Chivas is a strong team, the rivals would not want to lend the ball and seek to cover the bands; In addition, in the last games we have made concrete.

He added that despite the casualties due to indiscipline and affected by Covid, we have a very complete team, with the ideal men. However, the injury of attacker Alexis Vega was later revealed. This is a second degree sprain that will take four to six weeks, so the rest of the tournament is out.

Ricardo Peláez, the club’s sports director, asked the Liga Mx to disqualify the Uruguayan Ignacio Rivero, from Cruz Azul, as he injured Vega with a tricky tackle in a friendly match between the Sub-23 and La Maquina.

Brizuela stressed that it is an advantage to have the so-called King Midas on the bench, due to his successful career. The rival sees all aspects; He knows that he is going against a coach who is a winner and that favors us. Having him gives us positive thoughts, generates better spirits, and we want to help him extend that winning streak. Also, playing at home is a motivation, he said. 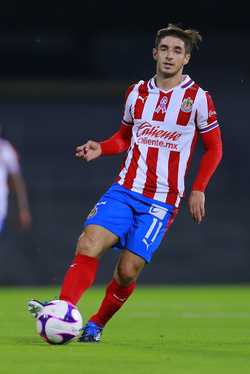 ▲ Brizuela Bunny wants to be an example for the youngest members of the Herd.

The 30-year-old right winger confessed to feeling sad about the tournaments that were not at the big party; Instead, he now wants to be a leader and set an example for the youngest, such as José Juan Macías, who is already recovered from muscle discomfort, of whom he said: He needs to believe it.

Midfielder Antonio Ríos spoke at the Toluca camp, saying that they are happy, excited and eager to start the game against the Tigres. We want to return with the triumph. We go with the mentality of winning, proposing and imposing conditions.

He commented that the scarlets can be excited about the eleventh title, although he acknowledged that Tigres is complicated, since they have a very large squad with great replacement players. The important thing will be to be attentive in all the lines, very concentrated, managing the times well. You have to give the coup of authority and go for the (cup) 11.

The Rayados del Monterrey, who will face Puebla, returned to training on Monday at their facilities in El Barrial, despite having five absences due to calls for national teams.

The Tuzos del Pachuca, who will visit Santos Laguna, are fighting against the clock to recover their squad, after reporting 14 casualties from Covid-19 a week ago.