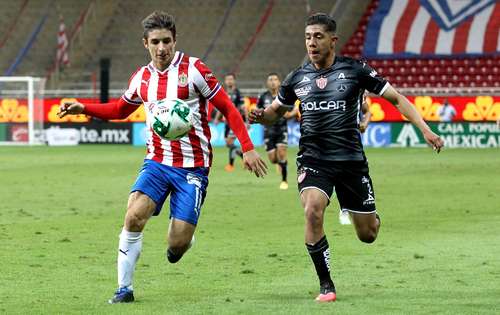 ▲ With a goal by Jesús Ricardo Angulo at the start of the second half, Guadalajara beat Rayos 1-0 in a suffered match.

The Chivas de Guadalajara accounted for Necaxa 1-0 in the reclassification match of the Guardianes 2020 tournament, with which they managed to return to the league after five tournaments, two and a half years without reaching the final phase.

Even decimated by indiscipline, contagion and injuries, Chivas completely dominated the first half, but got tired of failing countless arrivals, mainly from Ángel Zaldívar’s boots from the first minutes, and multiple wrong shots from Angulo, Uriel were added to him. Antuna and Jesús Molina.

Coach Víctor Manuel Vucetich was forced to modify the Herd’s lineup due to the absences of José Juan Macías and Alexis Vega; He changed his line from five to four defenders in the background, giving him the opportunity to add an element in the midfield, while Chelo Zaldívar was in charge of the attack as a striker.

However, midfielder Angulo, Vega’s substitute, was the most profitable in Guadalajara’s purpose; he found the score with a left-footed shot from the center of the area that wiped out the Rays in the 54th minute.

On the side of José Guadalupe Cruz, the order of the plays was taken care of too much, which did not result in friction, fouls and cards.

To secure the score, the so-called King Midas decided to lock himself in in the last minutes; He swapped forwards for defenders, and at 90 + 4, Colombian Joao Rodíguez was about to change history, but his shot was stopped by goalkeeper Raúl Gudiño.

The other two keys to the playoffs will be defined this Sunday with the current champion Monterrey at home against Puebla, and Tigres against Toluca.