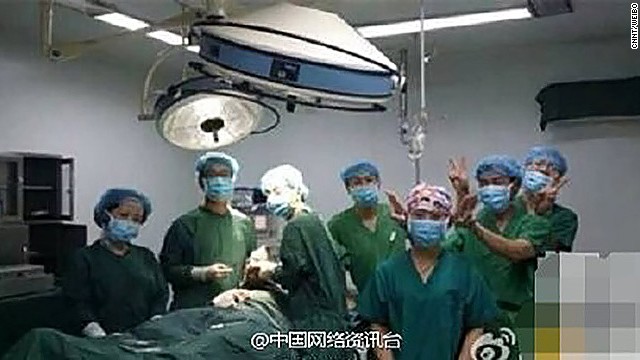 (CNN) – Executives and a group of doctors at a hospital in northeast China’s Shaanxi province were punished for apparently taking photos with their unconscious patients, local media reported Monday.

A series of photos recently circulated on Chinese social network Weibo, a news microblog, where doctors and nurses posed with unconscious patients on the surgery table.

A man makes the “V” sign in a lighthearted shot while doctors are performing a surgical procedure.

The Xi’an Public Health Bureau said the images were taken in August this year and three top executives were removed from their administrative posts at Fengcheng Hospital, the state news agency Xinhua reported. The rest of the staff who appeared in the photos were also punished and went without pay for three months.

The hospital issued a public statement and apology, explaining that the photos were taken to commemorate the last day of the operating room, before closing in favor of new facilities.

The photos sparked a reaction on China’s social platforms. Some bloggers posted their views on social media with the hashtag â€śsurgery selfieâ€ť. Many of them condemned the lack of professional ethics of the doctors.

They are not acting professionally. They are treating the suffering of patients as a joke, how can they even take a selfie at a time like this? â€ťWeibo user Penny Zhutou questioned.

Others expressed their sympathy.

â€śDoctors are human beings too. I don’t think there is anything wrong with them wanting to take a photo to celebrate after a long and successful surgery. We must look at this in a rational way, â€ťsaid user Diaolinghoucanque.

Serena Dong contributed to this report.