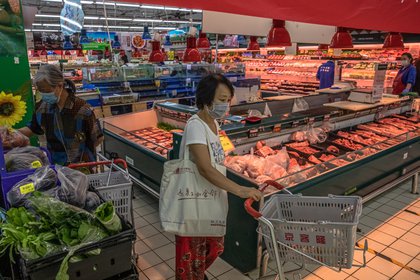 A woman shops in a supermarket in Beijing. . / EPA / ROMAN PILIPEY / Archive

Beijing, Nov 16 . .- China announced today that it has once again found remains of the SARS-CoV-2 coronavirus in the packaging of imported frozen products, in this case, pork from France, the local newspaper The Paper reported today .
A random inspection of the packaging of a consignment of pork from France stored in the southeastern city of Xiamen returned positive after a nucleic acid test.
The health authorities indicated that the consignment, of 25 tons in total, entered the country through the Shanghainese port of Yangshan and that the meat had not yet reached the market.
In addition, the authorities sealed and disinfected the cargo storage place.
In recent weeks, the Asian country has detected traces of coronavirus in several packages of refrigerated products -among them, of Brazilian meat and Ecuadorian shrimp-, which has led Beijing to tighten regulations for importing frozen products and their control.
In fact, contagion via this transmission route from two stevedores in the eastern port of Qingdao triggered a small outbreak in the city early last month.
To minimize risks, as of today, the eastern city of Shanghai has announced that it will be mandatory to subject all imported frozen products to analysis and disinfection.
In November alone, frozen shipments of Indian and Indonesian fish, Brazilian meat and other products from Germany, Russia and the Netherlands tested positive for coronavirus in inspections carried out by China, although such cases have occurred in China since July. different products from different sources.
According to the National Health Commission, mainland China currently has 374 active infections (of which 4 are serious) and 548 asymptomatic cases under observation.